Can a Computer Spot Possibilities a Team of Engineers Would Miss? 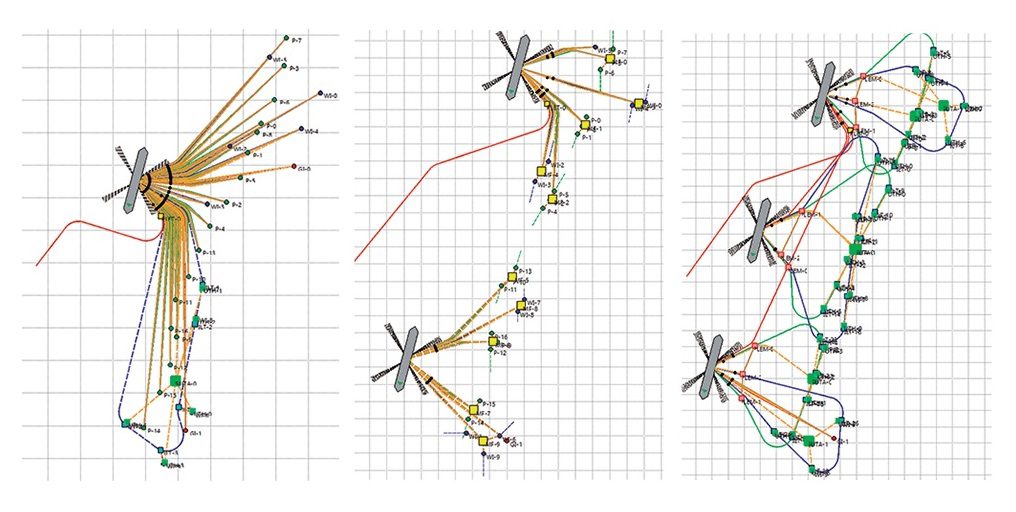 Computers are not original thinkers, but it might be possible for a digital brain to hit on a better design idea for an offshore field than a team of experts by grinding through thousands of possibilities.

That is the premise of a Brazilian startup, Deep Seed Solutions, which has combined a little-used programming approach and a big database to create a system to rapidly generate workable concepts that are ranked based on estimates of their productivity as well as widely used measures of costs and profitability.

The system, known as FLOCO for field layout concept optimizer, is based on a method most people have never heard of—metaheuristics—that has yet to be used on an actual project.

All of which makes it easy to dismiss the venture as unproven. The thinking behind it, though, has been used to generate oilfield design ideas and proven to be a useful alternative to the widely used standard operating procedure that moves step by step through a series of disciplines.

In a paper delivered at the 2018 Offshore Technology Conference (OTC 28664), the founders of Deep Seed delivered a sharp-edged critique of how initial project ideas are generated. They argue the slow-moving method is so inefficient that a team of 18 may only generate a handful of ideas over a 9-month period.

“The process is not well optimized, it takes a lot of time and generates a very limited number of concepts,” said Leandro Basilio, chief operating officer for Deep Seed Solutions. As a result, “the team usually repeats the same architecture and methods as previous projects.”

Basilio and his cofounder, Celso Noronha, the chief technology officer, both worked for a large offshore engineering company where they experienced “the pain” of creating development concepts.

FLOCO is the initial product from a company that has grown from 3 to 13 people over the past year. The paper was based on work with a local offshore venture, Repsol Sinopec Brasil. The system is now being evaluated by other oil and engineering companies, Basilio said.

Their method looks for quality in quantity. In the paper they presented how they used it to generate about 5,000 possible offshore development ideas ranked by key performance indicators.

They trace the history back to a series of papers, including two whose authors included Stan Cullick, who is now an engineering advisor to a couple of oilfield data and analytics startups.

A decade ago he was working for Halliburton where they developed a similar idea generator, also based on metaheuristics plus a big database, which could generate hundreds of alternatives. It lives on in the form of the service company’s Field Development Planning service that evaluates development concepts and estimates projects costs and likely future returns, according to Halliburton’s website.

“Companies are using these methods internally,” said Cullick, who named several major oil companies and engineering and service companies. But that is not the norm. “The conventional method is very manual with discipline silos where they walk one step at a time to generate a few combinations.” Fig. 1 is a flow chart showing an example of traditional methods.

During his years with Halliburton he used a similar tool for several international projects, which led to papers in 2007 and 2010 (SPE 108562 and SPE 138431) and he concluded that generating many ideas improves project plans.

“It saves a lot of time and effort in looking at possible combinations” for an offshore development, Cullick said. The method offered a “a set of alternatives for companies to consider that are much higher value.”

Computer programs such as FLOCO are not programmed to know, or care, how anyone did it before. It is one of a growing family of field development planning systems whose selling points include offering unbiased analysis.

Ideas are quickly created by assembling compatible components like building blocks. Using its models of flow, production, and costs, it estimates how each idea will likely perform and learns what will work.

Each possibility is rated based on how it is likely to perform using customer reservoir data and models as a starting point, as well as traditional financial metrics—net present value (NPV), internal rate of return (IRR), capital expenditure (Capex), and operation expenditure (Opex).

Simulations draw on a cloud-based collection of data and formulas that have gathered information on the cost and specifications of thousands of types of equipment, systems, and installation services.

It includes the models used to simulate issues, such as flow assurance when long subsea lines are run in deep, cold, waters. It includes data on reliability, specifications, construction costs, and technical readiness levels so users can put limits on the technological risk.

Deep Seed continues to expand its database, which is also marketed separately, so it can better model which equipment can be put together, how much it would cost to install, and how the subsea system design is likely to perform.

In comparison. the traditional method described in the paper builds up a list of design ideas using a process that flows through a series of experts. It begins with reservoir engineering, followed by well engineering, and ending five steps later with financial evaluation. While each expert is aware of the cost of what they are doing, the first economic evaluation of the whole system is not done until the end. If the idea comes up short, the process starts over.

Early decisions limit what is possible later. Each person along the way could say “I did my best,” Noronha said. But with a limited number of concepts created to choose from in defining the project design, it is hard to know how this combination of decisions compares to the best- or worst-performing possibilities.

Experts involved in offshore development say developers try to avoid problems, such as higher-cost subsea systems due to awkward well placements, by creating teams in which members are aware of how their decisions affect others.

All companies play up collaboration said Howard Duhon, principal engineering advisor for GATE. Close cooperation can steer early deciders away from decisions that create complications, but he added, “it does not always happen.”

The difficulty of putting an estimated value on designs is a consideration, said Duhon. Cost estimates on megaprojects are often far off the mark. But he notes that all the FLOCO-generated ideas are at least judged using the same data set and methods.

“I do not know if it works or not … but if it could generate an idea a project team might not have thought of, or generate it faster,” it could be valuable, said Duhon, who was formerly the SPE technical director for Projects, Facilities, and Construction.

The ultimate system would identify the absolute best design. That would not be FLOCO.

“It provides a rough idea of the possibilities and how they rank,” Basilio said during a presentation where he showed an array of possibilities ranked by cost and NPV. One of the options was circled in red that offered high value for the low cost, and he asked, “Why not this one?”

The results can be mined for tendencies. Are there certain combinations that perform well or poorly? What characteristics come with the biggest tradeoffs? For example, ideas with the lowest Capex often were among the highest in Opex.

Idea generation software is not designed to be a precise cost estimation tool. Basilio said their goal is results within 20% on the low side and within 30% on the high side, which is not far off from what Cullick said is the norm for initial idea generation.

Shrinking the margin of error would be significantly more complicated, requiring more and better data and models, and more computing power—putting it outside the range of the laptop computers used now.

FLOCO results can be displayed as scattered dots on a chart as shown in Fig. 2, plotting them based on the NPV of each concept and the capital expenditure (Capex) required to reach it.

The scatter chart, showing just the concepts that could be built in one construction phase, shows a cluster of three of the lowest-cost approaches ranked near the bottom, below $9 billion NPV, but there are also higher-cost designs in that zone.

By generating thousands of examples, they define a range of costs and values ranging from good to bad. A pair of ideas stand out with NPVs near $11 billion but there is a $300-million difference in the estimated Capex.

So which one should be chosen for optimization? Maybe none of the top performers will prove to be the practical approach. These are fodder for engineering teams looking for concepts worth detailed analysis. The cofounders of the company emphasize this is the beginning of the idea generation process not the final cut.

The system keeps track of which options add and subtract value, and uses that knowledge in subsequent runs to avoid bad moves like a chess master program. “It considers all the options and eliminates the bad options generated,” Noronha said.

The idea generation machine is aimed at solving a problem many companies do not think they have. Joe Leimkuhler, vice president for drilling at LLOG, said when it comes to idea generation, “companies tend to go with what you know.”

Idea generation is a more significant concern for the biggest players offshore whose business is built on doing complex megaprojects where a 10% difference in the cost or ultimate production adds up to big money. They can afford to take a chance on a method offering a big potential return, which could result in a costly failure, said Leimkuhler, who previously worked for Shell.

For LLOG, which is a one of the five biggest players in the Gulf of Mexico but not on the same scale of the majors, the key is dependable well designs that will deliver the cash flow needed to pay for future development, he said. Many of its projects are relatively simple, like developing a couple wells tied back to a producing platform. And it is easier to ensure collaboration on a team of people in regular contact with each other working on the daily problems of offshore development.

A history of projects to computerize oil development idea generation and evaluation in the Deep Seed paper go back to 1972. Past efforts were stymied by computers that lacked the processing power to solve these big multivariable problems. Processing power is no longer a limit, but fast-rising oil prices are a mixed blessing.

On one hand, prices are getting high enough to rekindle interest in offshore development, which was paralyzed by the fall in oil prices and the rise in onshore unconventional development. The Deep Seed founders were encouraged by the interest at OTC.

On the other hand, the possibility that oil prices will rebound to $100/bbl could be an issue because it would reduce the pressure to find a better development approach.

“If you look back 10 years ago everything was feasible,” Basilio said. Back then they were making good money because of high oil prices. Rather than take a chance on something new, they stuck with how they had done it before. “It was OK, it was working,” he said.

Can a Computer Spot Possibilities a Team of Engineers Would Miss?

Greg Leveille said he is optimistic that the shale sector will be able to bounce back from its second downturn in 5 years. The trick this time, he says, will be not just investing in new digital technologies but putting them to work.