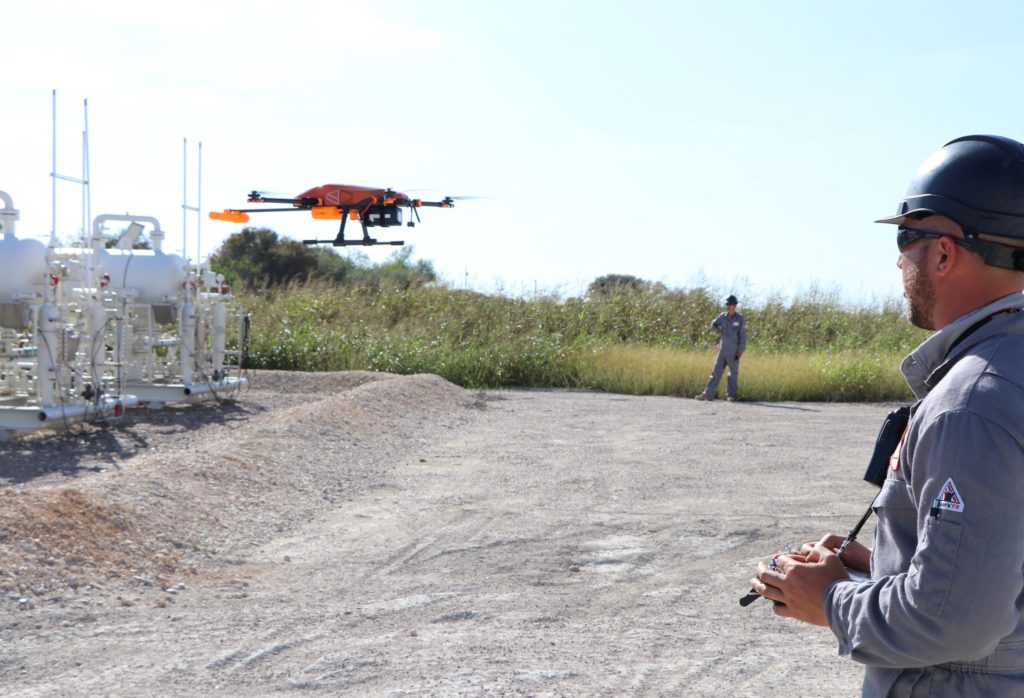 Hunting fugitive emissions: A pilot steers his sensor-equipped drone near a gas processing site in the Eagle Ford Shale of Texas. Source: SeekOps

The venture arm of the Norwegian-owned oil and gas explorer recently made equity investments in two California-based startups that will bring high-tech technologies into its natural gas operations. One of them flies, the other is destined to live out its days deep in the ground.

SeekOps uses drones as the platform for its methane-sensor technology that measures fugitive emissions with accuracy at distances of up to 100 m. This advanced gas detection system has its roots in NASA’s Jet Propulsion Laboratory (JPL) and its famed Mars rover program.

Upwing is in the midst of developing a novel gas-compression artificial lift system that works inside wellbores at depths ranging up to 12,000 ft. The Cerritos, California-based startup is a spinoff of variable speed drive manufacturer Calnetix Technologies, itself an established supplier to Equinor.

Equinor Technology Ventures (ETV), formerly known as Statoil Technology Invest, has not disclosed the dollar-figure of its new stake in these companies, however the typical investment range is between $1–10 million, according to its website.

From Searching for Life on Mars, to Stopping Leaks on Earth

The innovation behind SeekOps’ new inspection service, a laser-based spectrometer, is found on NASA’s Curiosity rover which has been looking for methane-producing microbes on the red planet since 2012. It was successfully transferred back to Earth in a research project between JPL and California’s Pacific Gas and Electric Company, a natural gas and electric utility that has been investing in new detection systems since a deadly pipeline explosion in 2010.

This road to commercialization eventually led to the founding of SeekOps last year in Pasadena, California, which has adapted the technology so that it can be used on small, rotor-propelled drones. The startup says that the sensors, which it manufacturers itself, are 100-times lighter and 1,000-times more sensitive than other comparable technologies.

These advances have been built into a field service that involves sending drones and their pilots to analyze real-time data streams of potential methane leaks. In addition to drones, the detection technology can be used on handheld devices or mounted to a vehicle.

Kristin Aamodt, the managing director of ETV, said in a press statement this month that, “Reducing methane emissions is considered critical to the energy industry, and we are very excited about the investment in SeekOps to help address this issue as part of Equinor’s climate roadmap.”

SeekOps says that it uses algorithms to isolate the source of methane emissions to within about a meter. The firm also claims that its sensor-analytics is able to quantify methane plumes, an accomplishment that has historically been the biggest challenge for researchers trying to assess methane emissions at oil and gas sites.

Compressing at the Source

Upwing’s emerging technology—called a Subsurface Compressor System (SCS)—is installed inside a well near the pay zone where it aims to increase production by creating a higher drawdown pressure at the inlet of its compression system. This also has the potential to postpone a well’s eventual plug and abandonment operation.

“For oil wells, we have electrical submersible pumps (ESPs), but for gas wells there are few options available to improve the drawdown,” said Pandurang Kulkarni, a principal researcher at Equinor’s research and technology group, in a press statement announcing the investment this past June.

Among the company’s innovations are magnetic bearing systems that allow rotating parts to move at high speeds without physical contact or the need for lubrication—features that Upwing claims enable “unlimited bearing life.”

Additionally, the multiphase compression system within the SCS works by decreasing the bottomhole flowing pressure at its intake, and then boosting the pressure of the fluids at the discharge point to move gas products up to the wellhead.

The SCS was first tested in early 2016 in the Anadarko Basin of north Texas which the firm said led to design changes and validation in additional pilot work at the end of that year. In the first trial, the system reached 45,000 rev/min which increased production by 16%.

The downhole lift system is aimed at both conventional and unconventional gas wells that may also produce natural gas liquids and condensates. Its operating envelope includes highly-corrosive and erosive well environments.

Upwing explains that the kinetic energy and velocity that the SCS generates can “eliminate liquid loading” in the lateral sections of unconventional wells—a common issue facing many shale gas producers in North America. In conventional gas wells, the startup says its device has potential to increase production by up to 74% through a reduction in bottomhole flowing pressure.

A joint-research study from Upwing and Equinor was covered earlier this year in JPT.