In the Battle Against Frac Hits, Shale Producers Go to New Extremes 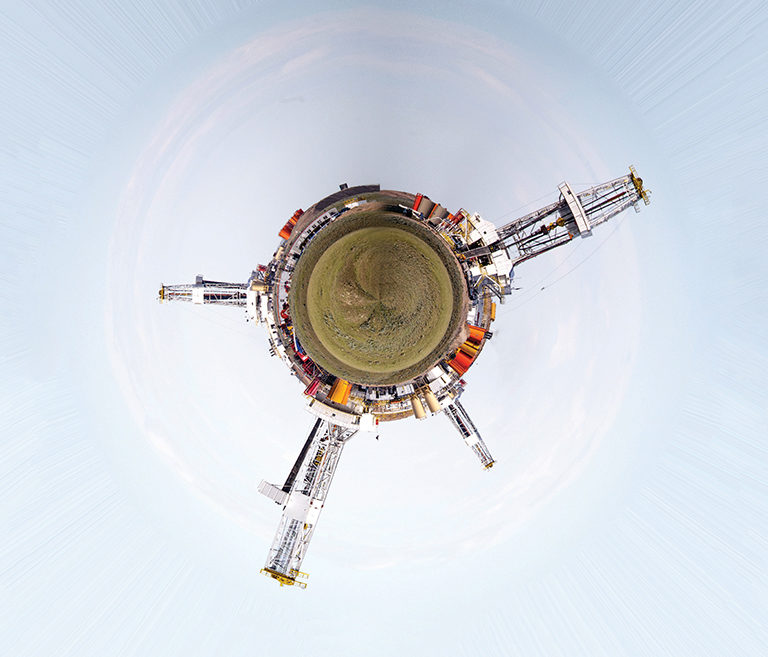 Seeing quadruple: A shift in thinking has prompted a number of producers to move to drilling up to four wells in the same place, at the same time. Source: Getty Images.

A new plan has been put to work in the Permian Basin’s remote but resource-rich swath of land shared by Texas and New Mexico.

Its objective can be reduced to this simple idea: protect neighboring horizontal wells from each other by drilling and completing them at the same time.

Most in the shale business know these projects as “cube developments.” Their scope of work has moved operators away from developing wells one at a time to a half dozen or more at a time. Each cube project is done from supersized well pads that host four to six rigs, two pressure pumping fleets, and hundreds of people every day.

From the surface perspective, these onshore megaprojects are delivering much needed economies of scale on everything from sand and water to parts and labor. However, the bigger motivation lies deep in the ground.

That is where shale producers have been battling poor production results for years because of frac hits between older and newer wells, often referred to as “parent” and “child” wells. The root of this complex problem lies in the fact that a child well’s hydraulic fractures often follow the path of least resistance into a reservoir’s most resource-­depleted zones, rather than to areas containing the best reserves.

In some parts of the Permian, the effect has caused child wells to deliver a 30% lower recovery rate than their parents (when factors such as well lengths are normalized). When such production shortfalls are felt fieldwide, the losses are measured in millions of dollars per day. The point of cube developments is to put an end to this cycle by creating only parent wells.

Thinking Inside the Cube

Occidental Petroleum began implementing its own version of the cube approach—called “optimized sequenced development”—last ­summer at its Greater Sand Dunes project in New Mexico. This year, the Permian stalwart says new wells brought on line there have turned in “basin-leading” peak 30-day rates that averaged around 3,100 BOE/D.

The Houston-based firm’s approach relies on a strong understanding of geomechanics to sequence the drilling, completion, and eventual flowback of multiple wells to mitigate frac hits. This allows some wells to be produced, while others nearby are still being drilled or hydraulically fractured, said Oscar Quintero, the president and general manager of Oxy’s Permian assets in New Mexico.

If done correctly, and critical rock properties are entered into the equation, then “you have vertical isolation, and you have horizontal isolation” of each well’s hydraulic fracture growth, said Quintero. “So, by design, we are avoiding the impact of frac hits.”

This succinct outline of the high-­density approach boils down a long list of subsurface nuances, ones that remain an intense area of study for the shale sector. Understanding them helps explain why Oxy and a growing number of its peers would go to the lengths of drilling so many wells simultaneously.

But the prize for coining the term cube development goes to Encana Corporation, which says the strategy has increased early well productivity in one of its Permian fields by 70% over the past 2 years. Despite the term’s growing popularity within engineering circles, some companies continue to use different terms such as QEP’s “tank-style completions” for what is seen as the same general practice.

“What Are We Draining?”

Success for cube developments depends on heavy-duty geoscience work that has changed the way petroleum engineers view how shale rocks and fluids interact. By maintaining pressure conditions, these efforts help some practitioners justify tight well spacing from 300 ft to 600 ft.

But in a stacked formation, explorers also want to take into account how far fractures may grow vertically to further ensure they are not drilling too many wells. Historically, such stacked pay zones within shale formations have been framed as relatively isolated layers of rock, or stratigraphic units. But years of analysis has shown wells drilled in a vertical orientation may see their producing areas connected by fractures.

Thinking of these layers as potentially interactive offers producers a new 3D-perspective of the target zone, representing a “geomechanical flow unit,” said Thaimar Ramirez, who leads a multidisciplinary team of geoscientists and engineers as the development director of Oxy’s New Mexico operations.

“When we have to go and stimulate this rock, then we go beyond the stratigraphic units in many cases,” she said. As a result, her team is now more concerned with “trying to understand what is that geomechanical flow unit, and what are we draining?”

Solving this question involves a database of geologic information that Oxy has obtained through years of exploration in the Permian—where it has long been the top oil producer thanks to its legacy conventional fields. The information drawn out of rock cores, well logs, seismic data, and fluid analysis helps the firm’s engineers build models that go through several iterations to define specific flow units.

Where two wells might have been placed close together in an older development scheme, the new workflow may show that it is more economic to drill one well in a certain zone. Or it could reveal a pair of flow units that are separated by a thin layer of a more resistant rock known as a “frac barrier,” and therefore two wells landed at different depths are necessary to capture more reserves (Fig. 1).

The typical cube scenario moves directionally, and for some operators may ultimately result in more than a dozen new wells.

Oxy says that each of its sequenced cube projects begin with an untapped reservoir unit, whereas others may be forced to involve a parent well. Two wells are drilled here and then zipper fractured. While the left-most well is brought on line after the zipper job is complete, the other well is kept shut in (Fig. 2).

By suppressing flow, this second well in the process becomes what Oxy calls a “completed barrier,” or what others refer to as a “pressure wall.” Its purpose at this stage is to protect the next set of wells from frac hits, and in some cases, companies will complete and shut in two of these wells to add more protection.

As the pressure wall is established, wells further to the right can continue to be zipper fractured, a process in which at least two wells undergo hydraulic fracturing in tandem. Zipper wells are needed in cube approaches for two key reasons: they generate temporary but beneficial stresses that are believed to better distribute new fractures; they also create meaningful cost efficiencies by using completions crews more effectively than in a single-well job.

To the far right of the assembly line, maybe a mile away, is a drilled-but-uncompleted well (DUC), renamed here a “buffer well.” Oxy and others report that these DUC wells are kept un-stimulated for a period to mitigate fracture interference between the wells being zipper fractured and the wells being drilled on the other side of the DUC.

Within each of these categories, well counts can be different depending on the size and characteristics of the target area.

Once all the heavy lifting is done, the last trick is to manage the production. In Oxy’s case, newly completed wells are brought on sequentially to accelerate and manage production peaks that could otherwise overextend its processing infrastructure on surface.

Not Perfect, But Worth It

Ultimately, the driver of change here is the need to protect the ­profitability of the shale sector’s large inventory of tens of thousands of undrilled wells. There are few public data points covering the financial toll suffered from frac hits, but among them is a technical paper (SPE 189853) presented earlier this year at the SPE Hydraulic Fracturing Technology Conference by a former completions engineer from Apache.

And last year, an executive with Range Resources was even more exacting when he told analysts that underperforming wells in the company’s Louisiana shale asset and “corresponding frac hits to offset production” amounted to a financial loss of $75 million per day.

While some experts see cube developments as one of the best ways to relieve these pains, they caution against seeing the simultaneous operations as a panacea.

Mohamed Soliman is the chair of the University of Houston’s petroleum engineering department and holds a patent for two of the earliest versions of zipper fracturing. He said the cube concept makes sense, in that avoiding the downsides of reservoir depletion moves the shale sector closer to its goal of production optimization.

“But there’s a catch,” he points out. “If you drill and complete all your wells, and you then produce them at one time, you may pay a massive price if the wells are not as productive as you think they will be.” In other words, these large-scale projects make it harder to run individual tests on new well designs to determine which are the best.

There is one more dose of reality to pour on: such massive onshore projects have been reported to cost from $120 million to $250 million, a price tag that for many smaller shale producers is simply out of reach.

In the Battle Against Frac Hits, Shale Producers Go to New Extremes