Drilling for Miles in the Marcellus: Laterals Reach New Lengths 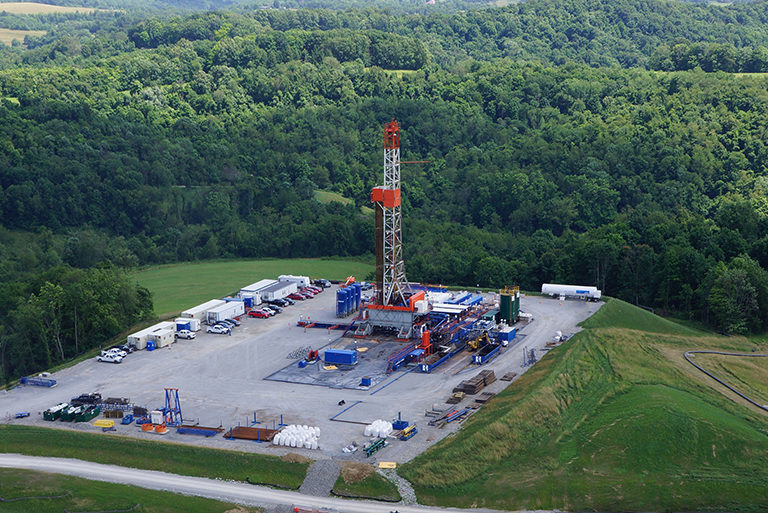 In early 2018, with the drilling of two lateral wells that hit lengths of 17,875 ft and 18,129 ft, respectively, Range Resources once again broke the record for longest laterals drilled in the Marcellus play—an area that includes Ohio, West Virginia, and Pennsylvania. It was an important new milestone for the company, but not because they broke a record.

“We only held that record for about 3 weeks, but lateral length records will continue to be broken,” said Range’s Vice President of Drilling Don Robinson.

In fact, in early 2017 when Range drilled its first well that exceeded 15,000 lateral ft, the team didn’t realize it had set a record-setting length until 2 months afterward. “It’s exciting when something like that happens, but our true objective is to continue lowering our cost per lateral ft (CPLF).”

As Robinson explains it, natural gas drillers have traditionally used cost per ft (CPF) as their most important Key Performance Indicator (KPI). “It’s a number that is simply derived by dividing the total drilling cost by the measured depth of the well, and it’s been the standard by which drillers have measured their efficiency and productivity.”

A drilling team is tasked with providing lateral footage that is then handed over to a completions group to be hydraulically fractured (fracked.) “Drilling’s objective is to provide each lateral ft at the lowest possible cost; while utilizing precise targeting and steering to keep the wellbore in the sweet spot of the formation. After that, a properly cemented production string is required to maximize the effectiveness of the hydraulic fracturing. With that in mind, all operators must now focus on minimizing their cost per lateral ft (CPLF), the new drilling KPI,” said Robinson.

For the past 6 years, the drilling team at Range has steadily increased lateral lengths, leading to significant decreases in cost per lateral ft. The performance has also included improvements to rate of penetration (ROP) and reduced flat time, together with reductions in connection time and trip time. Avoiding the loss of directional assemblies has also been key, along with carefully managing the impacts of fluctuating service costs. 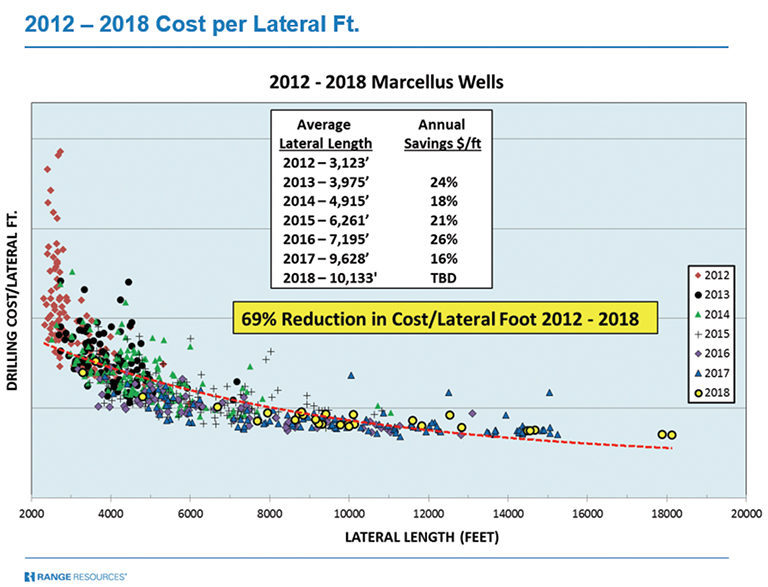 The effort to reduce the cost per lateral ft has been consistent. “Five years ago, when we were first plotting comparisons of lateral lengths drilled in 2012 versus 2013 and evaluating drilling cost per lateral ft, we immediately realized the true value of longer laterals,” said Robinson. “By spending another day or two we could essentially double the lateral footage, which was the equivalent of drilling a second well in two days. In 2013, a 27% increase in average lateral length reduced our costs per lateral ft by 24%.”

Today, Range and other operators are continuing to push their laterals out to nearly 3.5 miles, a trend Robinson points to as an indicator of the increased value in longer horizontal wells. Range also has an advantage with regard to the company’s “blocked-up” acreage position in southwestern Pennsylvania—a circumstance that can more freely allow for the drilling of wells at or in excess of 18,000 ft. However, while Robinson makes it clear he believes there is a limit to lateral lengths, he also says they haven’t hit it so far.

“The curve is definitely flattening out. We saw our annual reduction in cost per ft peak at 26% in 2016, it dropped to 16% last year, and it’s expected to be in single digits this year. But by all appearances, lateral lengths will continue to increase until there is no further CPLF reduction. And once that happens, drillers will likely seek new and better technology to solve that issue. In the meantime, the logic behind drilling an 18,000 ft or longer lateral length well is simple math. When you consider that back in 2012 the drilling of a 3,000 ft lateral length well was costing nearly $2 million per well, and in 2018 you can drill an 18,000 ft lateral length for well under $3 million, then it becomes obvious that you’ve experienced a major game changer.”

Last year, the number of horizontal rigs Range had working was down 5% from 5 years prior, while the number of wells the company drilled was down 9%. However, even with those slight decreases, the number of lateral feet drilled jumped from less than 400,000 in 2012, to over 1.1 million in 2017—an increase of 280%.

Longer laterals also have major surface footprint benefits; as drilling companies can now significantly reduce the number of drill sites needed to produce the same volumes that would have previously required additional wells. In a state like Pennsylvania, where hilly terrain often requires sophisticated and costly site preparation, the cost savings and reduced impact on the environment and local communities that come with drilling fewer sites is a significant value add for numerous stakeholders.

As longer laterals have become the norm, adaptations continue to be made industrywide.

“Operators continually seeking improvements have created some challenges for the industry’s drilling contractors,” said Robinson. “As the play has evolved, rig requirements have continued to change. Over time, modifications have included walking packages, more powerful pumps, stronger top drives, and more rack back capacity. Now, most operators require 7500 psi rated pumps and an increasing number of operators also require a third pump along with an additional generator.”

Range is among the operators that have increased the pump pressure rating from 5000 psi working systems to 7500 psi due to longer laterals. The 1600 horsepower (hp) pumps had been the norm for the Marcellus wells but two of the rigs working for Range now utilize 2,000 hp pumps. That allows for a needed increase in maximum pressure from 5,000 psi (which was sufficient for laterals up to 12,000 ft) to the 6,000 to 7,000 psi working pressure that is required for extending the laterals. Robinson explained that added pressure is needed to clean the hole by increasing annular velocities and provide the additional power required for rotary steerable tools.

“Major efficiency gains have slashed the number of rigs required and consistent gains continue to be made by the rigs that are still drilling in the play. When you look at the annual progress being made with the amount of horizontal footage drilled per rig, it’s truly impressive. Companies are achieving their objectives with far fewer rigs, which means rig counts and/or well counts no longer have the relevance they once did. The annual lateral footage being drilled is what’s important,” said Robinson.

Longer lateral lengths are also leading to changes in how conventional drilling equipment is being utilized; with most drillers now relegating its use solely to nudges, shorter laterals or building curves. While directional drillers are still advising the driller on the Range rigs, a current trend is to remove the directional drillers from the rig and instead have them provide assistance remotely. The move away from conventional directional assemblies to rotary steerable equipment, along with improved communications, has provided opportunities for a directional driller to oversee more than one rig—another efficiency that has the potential to reduce drilling costs. 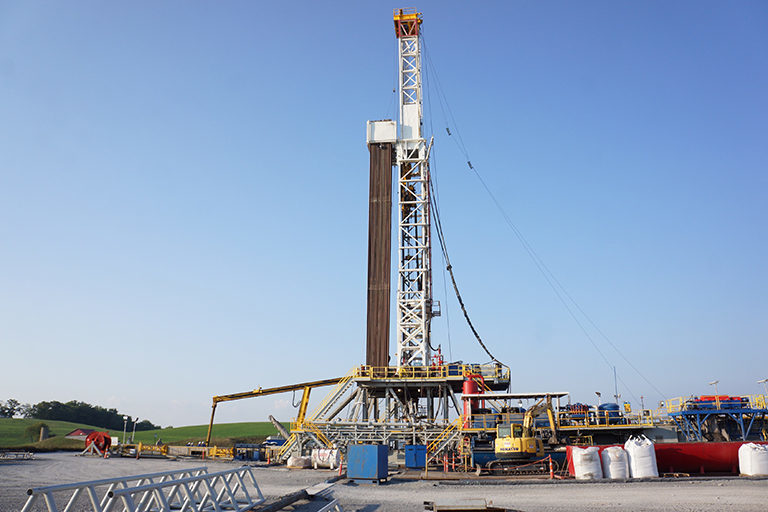 As drillers have encountered added friction in wells with laterals that stretch out more than three miles, they’ve had to make some changes with regard to drilling fluids. In the Marcellus, the vast majority of operators are utilizing oil-based muds that provide superior lubrication and improved inhibition for wellbore stability, compared to water-based muds that were the previous standard.

“When we first started drilling lateral lengths over 10,000 ft, we quickly recognized that we were going to have to bite the bullet and make some changes,” said Robinson. “We could no longer run lower cost water-based mud, we had to switch to more costly oil-based mud.”

Once the company made the switch, they began using oil-based mud on all their laterals, longer and shorter, finding that route to be more practical than changing the type of mud from well to well. As a result, incremental costs were increased by an amount approximately equivalent to adding two days to the cost of the well. However, the decrease in both risk and potentially expensive consequences has been considered an appropriate offset to any of the additional drilling fluid expenditures.

According to Robinson, the most likely cause for dramatically overspending a Drilling AFE (Authority for Expenditures) is the loss of a costly directional drilling assembly in the hole, whether by twisting off, or getting stuck and becoming irretrievable.

“In 2013 we lost a number of directional assemblies. It’s very expensive, the cost for losing just the tools was typically somewhere between $600,000 to $1 million per incident, and then you have the added amount of the hole you lost on top. It’s the type of loss that makes you feel like you’ve had a bad month, and it only takes a couple of ‘train wrecks’ to negatively impact your cost per lateral ft.”

After those directional assembly losses in 2013, Range took what some might consider drastic action—idling rigs and putting a stop to drilling for nearly a week as the company investigated what went wrong. Afterward, measures were put in place that have since sharply reduced the number of similar incidents. “We actually expected to experience a greater frequency of lost directional assemblies as we’ve continued drilling longer laterals, but that hasn’t happened. We do take extra precautions to avoid problems as we extend our laterals. Trust me, you don’t want to lose 18,000 ft of lateral hole along with the directional tools if there was something you could have done to prevent it,” Robinson added.

In 2017 the team experienced a stuck tool on one of Range’s first 15,000 ft laterals; which led to additional efforts to make sure the hole is clean, and to ensure the rig crew “is never in too big of a hurry after we’ve received some obvious warning signs,” said Robinson. “If you cannot get the casing to the bottom and perform an adequate cement job, you really haven’t accomplished anything.”

Today, wellbore stability remains a primary objective, with the team focused on maintaining sufficient mud weight, monitoring pump pressure and torque, and constantly monitoring the cuttings coming across the shaker to head off any potential problems.

“Rubble is your enemy when you are trying to drill a lateral hole,” said Robinson. “When we see large, baseball-sized chunks of shale coming across the shaker or a massive amount of cuttings piling up on the shakers, we know we have to get things settled down prior to resuming drilling.”

As he looks toward the future of drilling, Robinson anticipates that lateral lengths for all operators will continue to grow. And while he can’t be sure where the cut-off lies, he emphasizes that no matter how many feet Range and other operators may ultimately hit, the most important question will remain the same, “At what cost per lateral foot?” In the meantime, “We’re excited about the lateral lengths we’re drilling, and we’re constantly testing new ideas and exploring new technology to become even more efficient.”

Range Resources will deliver a technical paper on its drilling advances at the SPE/AAPG Eastern Regional Meeting held 7–11 October in Pittsburgh.

Drilling for Miles in the Marcellus: Laterals Reach New Lengths