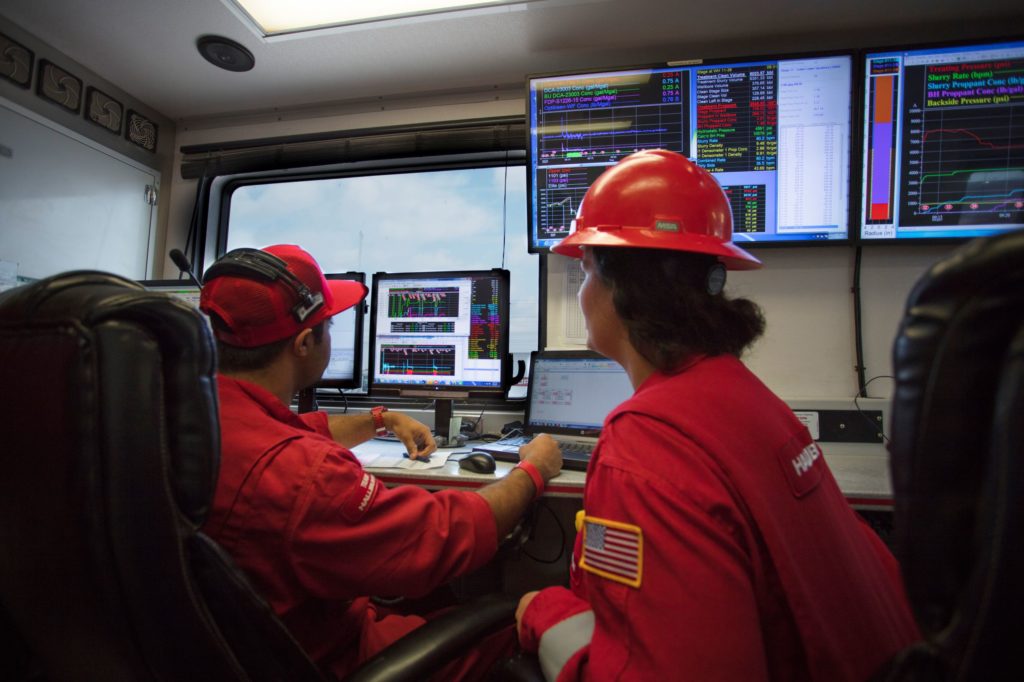 Inside the fracturing van. Source: Halliburton

Drilling technology has been marching steadily along on the path of automation over the past few years and now it is time for hydraulic fracturing technology to take a similar journey.

The latest proof this is happening comes from Halliburton, which announced this week the introduction of an automation software that largely removes the human touch from pressure pumping and puts it into the hands of algorithms.

“The way that the system works is that you push a button and the job starts,” said Scott Gale, a strategic business manager for well productivity at Halliburton. He added that the first users of this system have reported, “It’s like using cruise control for the first time on your car.”

The service is called Prodigi AB, and Halliburton says it will help improve reservoir stimulation while mitigating the frustrating problem of screen outs. But if there is one overarching goal behind the new technology it is—in a word—consistency.

Each individual in charge of ramping up pressures on a stimulation job tends to do it a bit differently, which means certain quality-defining parameters might be impacted. These individual particulars also bring on data quality challenges that then impact advanced analytics initiatives meant to identify what factors really drive optimization.

Gale said the way to overcome these issues is through the automation of the system that controls treatment pressures. “By eliminating some of that variability, and doing this part of the job more consistently, it allows for a faster learning curve,” he said.

As part of the service, Halliburton will use location-specific parameters that could include rock quality data to shape customized approaches to fracturing each well. This involves using real-time measurements to feed algorithms that control and adjust the pump rates. The company notes that this “adaptive rate control” ultimately enables better fracture conductivity.

The automated pumping technology has so far been used to treat more than 250 fracturing stages in wells located all over the world, including some in China and Saudi Arabia. Halliburton is not sharing how many pumping trucks or fleets are running on the new software, but said it is active on jobs in the shale fields of the US and Argentina.

Notably, Halliburton does not need to add any sensors or other hardware to its pumping units to enable this service. That means that the firm can scale the automated feature to all its pumping fleets with just a software download.

Screening Out the Screen Outs

Screen outs are the fracturing equivalent of a traffic jam and happen whenever sand or proppant get backed up as these solids try to flow into perforations, which can stop the entire job until the sand is cleaned out.

One early metric seen from Halliburton’s trials was a 7% average reduction in treatment pressures, which can be achieved without hurting flow rates. “That combination is what's contributing to reduced screen outs,” said Gale, who also noted that lower treatment pressures represent more operating flexibility with the pumping equipment.

Applying too much pressure too quickly can lead to other problems, including perforation damage that can negatively impact fracture behavior and geometry. Of the most common issues involved here is when an individual perforation within a cluster of several is eroded to a point where it becomes the dominate pathway into the reservoir, leaving the other perforations under-stimulated.

Operators try to work past this with diverter technology that is pumped into these enlarged perforations. But here as well, too much pressure will foil the effectiveness of the diverters as the force overcomes their abilities to form a barrier.

Independent of diverters, Gale said replacing brute force with more of a “finesse approach,” one driven by data and automation, better maintains the integrity of the perforations. Ideally, this should lead to a more even stimulation treatment—seen as the desired outcome for every fracture cluster in a horizontal well.