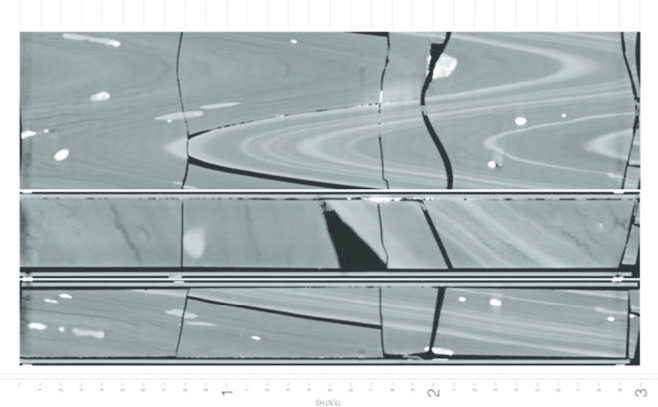 A cross-section of a core with multiple fractures. Source: URTeC 2902624

Editor’s note: This is the second in a series of four reports with highlights from the Hydraulic Fracturing Test Site in the Permian Basin. First in the series can be read here.

Depending on one’s perspective, the 600-ft of core is either a really big sample, or not really significant.

It is huge considering how rarely anyone goes to the expense of mining back fractured rock from a well drilled nearby. It is also the first reported in the Permian Basin. The only technical paper reporting on fractured rock that was mined back in a liquids-rich basin was written by ConocoPhillips in the Eagle Ford in 2014 (URTeC 2670034).

But that 4-in diameter angled well in the middle of an 11-well pad amounted to a pin prick in a formation prone to abrupt, unexpected changes that affect fracturing. Jordan Ciezobka, manager of research and development at the Gas Technology Institute, pointed out the formation is “under-sampled.” The institute managed the federal grant supporting test site 1 and is planning Hydraulic Fracturing Test Site 2 (URTeC 2937168).

For those doing modeling, the data presents a quandary. It offers physical evidence of what fracturing looks like in the ground. But the range of observations in the upper and middle Wolfcamp suggest the same fracturing design will perform differently in a zone 325 ft deeper.

Instead, Laredo Petroleum used the test results to identify what widely available formation evaluation methods can be used to reliably predict critical variables, such as the presence of natural factures.

That information “is essential for understanding the economic impact that complex fracture networks have on well performance,” according to a paper on using fracturing data for better modeling presented by Whitney Campbell, a geologist at Laredo Petroleum (URTeC 2934611).

Analysis of hundreds of fractures was used to narrow down a long list of test methods to the ones most likely to accurately predict changes in fracture density.

Armed with real-world data on the number of fractures per foot and more than 30 inputs on the reservoir rock, Campbell said the company created a “facture intensity log” to reliably answer the question “do we see a fracture at this interval or not?”

The paper described a two-stage project. First it narrowed the list of markers for predicting natural fracture intensity to the ones most likely to get it right. Then they used that result as an input along with the best set of markers to predict hydraulic fracturing results.

While natural fracture data from seismic testing is often used, the paper questions the “over-reliance on seismic attributes that are commonly influenced by noise.”

At the top of the list of the best predictors of natural fractures are gamma ray logs, shallow resistivity, and bulk density measures, plus a measure of brittleness, which Campbell said was based on an output from their logging software.

Most significant on the hydraulic fracture inputs list was the gamma ray log, followed by Young’s modulus, shallow resistivity, and a model used to identify weak interfaces between rock layers with differing properties. They help “identify the rock type, brittleness, stress, and the presence of weak interfaces.”

The paper said the “results imply that hydraulic fractures have increased intensity in organic-rich shale sequences.”

The work described in the paper is now being used to create what Campbell described as a “high confidence variable” for reservoir modeling for other Laredo developments in the Permian. When asked if this has improved production, she said the company is “working closely with some of our engineering groups to get a handle on that.”