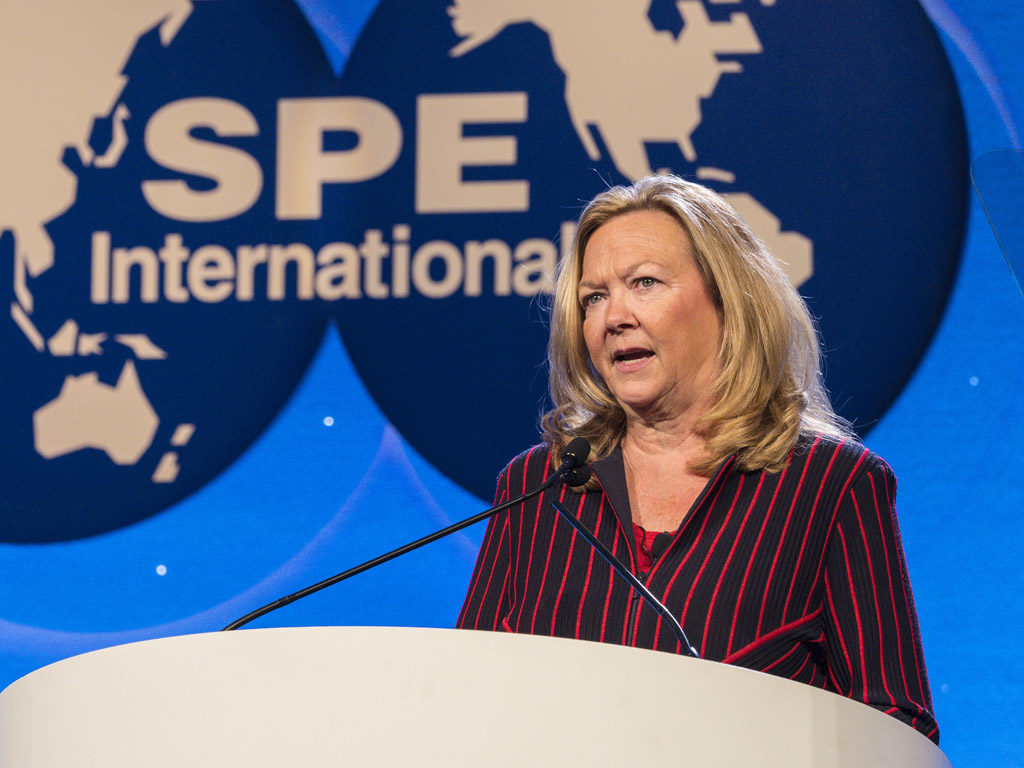 2018 SPE ATCE Chairperson Sara Ortwein, seen here speaking at the Opening General Session, addressed the acceleration of value capture from the digital transformation during the chairperson’s luncheon on the opening day of ATCE.

The digital transformation in upstream oil and gas is already under way, as operators seek to identify the technologies that will bring added value to their enterprises. Speaking at the SPE Annual Technical Conference and Exhibition (ATCE) chairperson’s luncheon, 2018 ATCE Chair Sara Ortwein said the industry has shown “pockets of innovation” that are demonstrating digital value in real-world applications. However, accelerating this value capture will require a greater understanding of the people behind the technologies. The industry, she said, will have to adapt to a new cultural focus, emphasizing new skill sets and mindsets, if it wants to create a new digital reality.

The Keys to Transformation

Ortwein, president of ExxonMobil subsidiary XTO Energy, said that the digital transformation of upstream businesses is centered on four elements: the proliferation of low-cost sensors, robotic technologies, computing power, and other applications and tools; the ability to process, analyze, and draw insights and actions from large datasets; the ability to leverage machine learning or deep learning to rapidly learn from collected data; and combining the first three elements to drive automation.

“We are most interested in digital technologies that give us the ability to collect, sort, and share massive amounts of relevant information, the information that drives our very data-intensive business,” Ortwein said. “We want to be able to glean actual insights and intelligence from that data as rapidly as possible, and we want to use our expanding digital backbone to automate or simplify the widest possible range of processes and tasks. Taken together, that’s a compelling value proposition.”

Ortwein said the potential savings in capital expenditures make the digital transformation worthwhile, but still the industry faces major hurdles in making it a reality. Are companies able to design and implement existing and emerging technologies to maximize their benefits and extend their capabilities? Also, can they identify, recruit, and develop employees that are capable of working in a seamless fashion with that technology?

While she said it is unlikely that anyone can answer them right now, Ortwein speculated that those questions go hand in hand with one another. Technology relies on people, and people with digital expertise are in the work force. However, Ortwein said those people do not consider oil and gas as their first choice when exploring possible career paths. To get them on board and begin accelerating the digital transformation, she said industry must undergo a cultural transformation.

“For our companies to fully embrace the future and become digital, we must develop, recruit, and retain digitally savvy employees who can utilize these technologies in every function of our businesses to create value. It’s not enough to have one or two groups or business units with some digital capability. We must rethink and restructure how we plan, how we work, and how we operate. Without a culture change, digital will remain just a tool in a few hands rather than a strategic approach to our businesses, embedded in everything we do,” Ortwein said.

Regardless of these challenges, industry is already using digital technologies in a number of areas, such as modeling and development planning. Ortwein pointed out the use of proprietary algorithms for subsurface data interpretation, which helps operators complete complex calculations in much shorter timeframes than in the past.  In February 2017, Exxon Mobil Corp. partnered with the National Center for Supercomputing Applications to set an industry record, using the Blue Waters supercomputer to run a reservoir simulation using 716,800 processors. This total was more than four times the number of processors previously used for such simulations. IBM and Nvidia broke that record 2 months later, completing a one-billion-cell Echelon reservoir simulation.

Ortwein also pointed out digital’s impact on remote operations, which she said will enable a step change in staffing levels and associated costs while eliminating safety risks, as well as supplement the automation of manual tasks that previously required hours of staff time. To that end, ExxonMobil’s downstream business is engaged in Open Process Automation (OPA), an initiative launched to create standards-based, open, interoperable, and secure process automation architecture that will be commercially available to all companies as an alternative to the closed proprietary systems available in the marketplace today. This could support the reuse of control system applications among end users and reduce the total cost of ownership.

The OPA Forum comprises more than 134 companies from a variety of industries, including energy companies such as Chevron, Devon, Equinor, and ConocoPhillips. Proof-of-concept prototype work for OPA, performed under contract with Lockheed Martin, became operational this past September and entered the final testing stage in the beginning of 2018. Ortwein said OPA could benefit a broad spectrum of continuous energy industry segments.

“Companies are investing significantly to design and build out digital platforms that link technologies, people, and data together, wherever they happen to be,” Ortwein said. “The days of disparate IT systems that may not talk to one another may not be history just yet, but it’s a matter of time.”