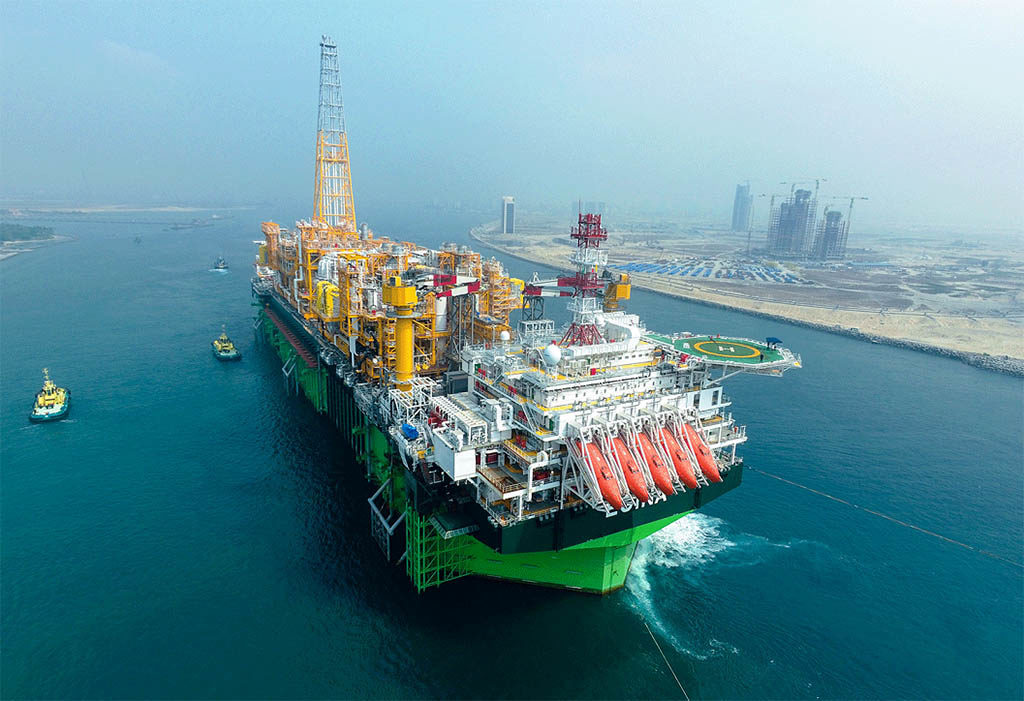 The 200,000-B/D Egina FPSO is now on location off Nigeria and is preparing for startup by yearend. Source: Total.

Despite a trend toward renewables and low-carbon energy production among European majors, Total remains wholeheartedly committed to deepwater production.

The French company expects its deepwater output to reach 500,000 BOE/D by 2020 on the back of its operations in Africa, Brazil, and the US Gulf of Mexico. This will generate cash flow from operations of more than $30/BOE at oil prices of $60/bbl, said Arnaud Breuillac, Total president of exploration and production, during an investor presentation this week.

From Africa alone, Total expects to produce 200,000 BOE/D by 2020 and 400,000 BOE/D within the next 5 years, bolstered by three projects: Moho Nord off Congo, Kaombo off Angola, and Egina off Nigeria. The company now operates 10 floating production, storage, and offloading (FPSO) units off West Africa and some 600 deepwater wells.

The company recently started production from Kaombo, where the Kaombo Norte FPSO is ramping up to 115,000 B/D of oil as the project’s second FPSO, Kaombo Sul, prepares to come online in the middle of next year. Combined, output will peak at 230,000 B/D.

“The Egina FPSO is already on location, has been anchored successfully, and now is in commissioning preparing for startup before the end of the year,” said Breuillac. Oil production there will peak at 200,000 B/D.

“Cash flow from operations at $60[/bbl] from those three projects will go from $1 billion to $4 billion by 2020,” he said. Total is boasting major improvements in operational efficiencies in Africa, with lower development costs. It reduced the numbers of days required to drill and complete a deepwater well there by 35% between 2015 and 2017 as a result of optimized and standardized well designs, lower nonproductive time, and 24/7 remote monitoring.

Breuillac added that optimized design and more favorable markets will facilitate the launch of several “short-cycle development opportunities”—mostly infill wells tied back to existing infrastructure—that were put on the backburner in 2015 when the company froze spending.

In Brazil, Total’s production is expected to reach 100,000 BOE/D by 2022. “The Brazil presalt deepwater domain benefits from fantastic geology, providing low development costs,” he said. “Reserves per well are five to eight times higher than most other deepwater basins.”

The company and operator Petrobras are planning to deploy five FPSOs at the Libra project and four from the Iara project. Phase 3 of Total’s operated Lapa Field is expected to launch by 2019. The Sururu well on the Iara concessions recently revealed 530 m net oil pay.

Total projects its gulf output to eventually add another 100,000 BOE/D. The company says it’s “maturing” its operated North Platte and nonoperated Anchor discoveries to reach a final investment decision (FID). It acquired interests in the projects earlier this year as part of its effort to increase its footprint in the region. The company is also appraising the nonoperated Ballymore discovery made earlier this year.

The Ballymore consortium envisions an early production scheme and has identified several other prospects that could possibly be tied back to the project. The North Platte development will utilize a 75,000-B/D newbuild semisubmersible facility tied back to nearby export systems. “We are in the process now of optimizing the well and topside design with the objective to take FID in 2020,” Breuillac said.

Total also has seven licenses in the Mexican gulf and imminent drilling prospects in now prolific Guyana, Mauritania and Senegal, and Namibia and South Africa. However, it was announced this week by operator Tullow Oil that the Cormorant-1 exploration well off Namibia encountered noncommercial hydrocarbons and is being plugged and abandoned.