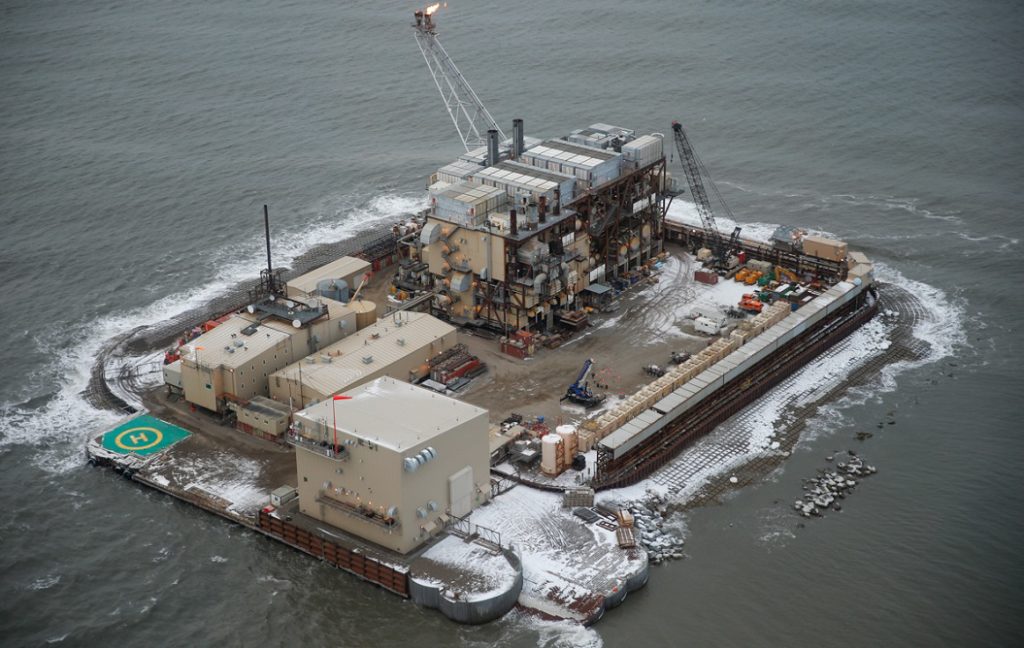 Hilcorp has received long-awaited federal approval for its plan to build a 9-acre gravel island for drilling and production in the shallow waters of the Beaufort Sea.

Liberty Island, to be located 5 miles offshore in 19 ft of water, would be the first oil and gas production facility in federal waters off Alaska. The industry has explored building a site there for more than 3 decades.

It would be the fifth artificial island to operate off Alaska, with Hilcorp’s Northstar and Endicott Islands, Eni’s Spy Island, and Caelus Energy’s Oooguruk Island sitting in state waters. Joe Balash, assistant secretary for land and minerals management at the US Department of the Interior, said the agency considers the Hilcorp plan to be “a relatively conservative, time-tested approach toward offshore oil and gas development.”

The US Bureau of Ocean Energy Management (BOEM), a unit within the Interior, greenlighted the project with conditions after consulting with communities and tribal organizations on the North Slope. Hilcorp is still in the process of obtaining the rest of the 60 federal, state, and local permits and authorizations it needs to fully implement the project.

The conditions set out by BOEM allow Hilcorp to drill only when ice at least 18-in.-thick covers a 500-ft perimeter around the island. Vessel traffic is seasonally restricted to reduce potential disturbance to Cross Island subsistence whaling activity, which begins 1 August and proceeds until quotas are met.

Should a well blowout and oil spill occur, BOEM said, the presence of solid ice while drilling ensures better accessibility to the site and better facilitates oil removal techniques such as in-situ burning, which Hilcorp intends to employ.

The Liberty facility would resemble the Northstar facility, located 31 miles to the northwest, which has been operating since 2001. The island would be built from the bottom up with gravel poured to the sea floor. Linked concrete mat armor and steel-reinforced walls would fortify the structure against ocean currents, waves, and ice.

Eighteen artificial islands have been built for exploration and development in Alaska’s shallow waters since the early 1970s.

The project has an estimated 80–150 million bbl of recoverable oil. A land rig would drill 16 wells from the island, and peak output is expected to reach 60,000–70,000 B/D within 2 years of production launch. Field life is expected to last 15–20 years. Oil would be transported through a pipe-in-pipe subsea line with 12-inch and 16-inch diameters linked to the TransAlaska system.

BOEM's approval comes almost 4 years after Hilcorp filed its development and production plan. The filing almost immediately followed the company's purchase of operated interest in Liberty, Northstar, and Endicott from BP as part of a $1.5-billion deal. BP is still a partner in the Liberty project along with ASRC Exploration. Shell discovered the Liberty field in the 1980s, and BP’s Liberty No. 1 well confirmed the discovery in the late 1990s.

Houston-based Hilcorp is one of the largest privately-held US independents. In May, the company produced 22,000 BOE/D from Alaska’s North Slope and another 35,000 BOE/D from the Cook Inlet. It had two rigs working in the state.