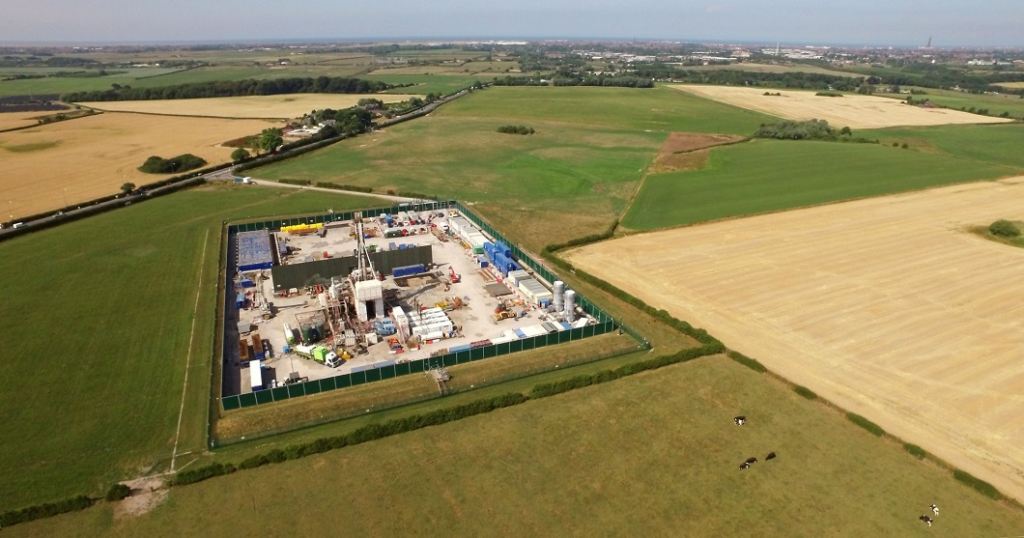 Cuadrilla’s Preston New Road site in Lancashire, where the firm hopes to have an initial assessment of recoverable gas in next year’s first quarter. Source: Cuadrilla.

The latest and largest came 29 October at 1.1 magnitude about 2 km below the surface. This was just 3 days after the operator first stopped injection activity because of a 0.76 magnitude tremor, which was proceeded by a second at 0.78 magnitude. Other, smaller quakes have also been detected since fracturing operations began on the site about 2 weeks ago.

“Early indications are that these seismic events have been induced by hydraulic fracturing operations at the site,” the UK Oil and Gas Authority (OGA) said in a statement.

Quakes that register at 0.5 or higher are considered “red events” under the OGA’s traffic light monitoring system and therefore require the operator to stop injection for at least 18 hours, reduce pressure, and observe seismicity and ground motion should further tremors take place.

“Microseismic events such as these result in tiny movements that are way below anything that would be felt at surface, much less cause any harm or damage,” Cuadrilla said in a statement after the first event. “All the relevant regulators were informed without delay and we have verified that the well integrity is intact.”

Tremors of around 2.0 magnitude and below, often called microearthquakes, are not usually felt by people.

The well is the first horizontally drilled shale well to be fractured in the UK. Cuadrilla plans to subsequently fracture a second horizontal well at the site. Tapping into the Bowland Shale, the company intends to assess how much gas it can recover from the wells and determine their commercial viability.

Work began after years of legal battles and delays, including a last-minute injunction brought forth by a Lancashire resident that was thrown out by a judge. The resident questioned whether there are adequate emergency plans in place should an incident such as a well blowout or gas leak occur.

Cuadrilla told the court that it costs the company £94,000/day to keep its fracturing equipment on site.

The company in 2011 had to stop fracturing its vertical Preese Hall-1 well at Weeton in Lancashire after causing “a number of minor seismic events,” according to a subsequent report that it commissioned. The episode resulted in a more than year-long moratorium on fracturing imposed by the UK government.