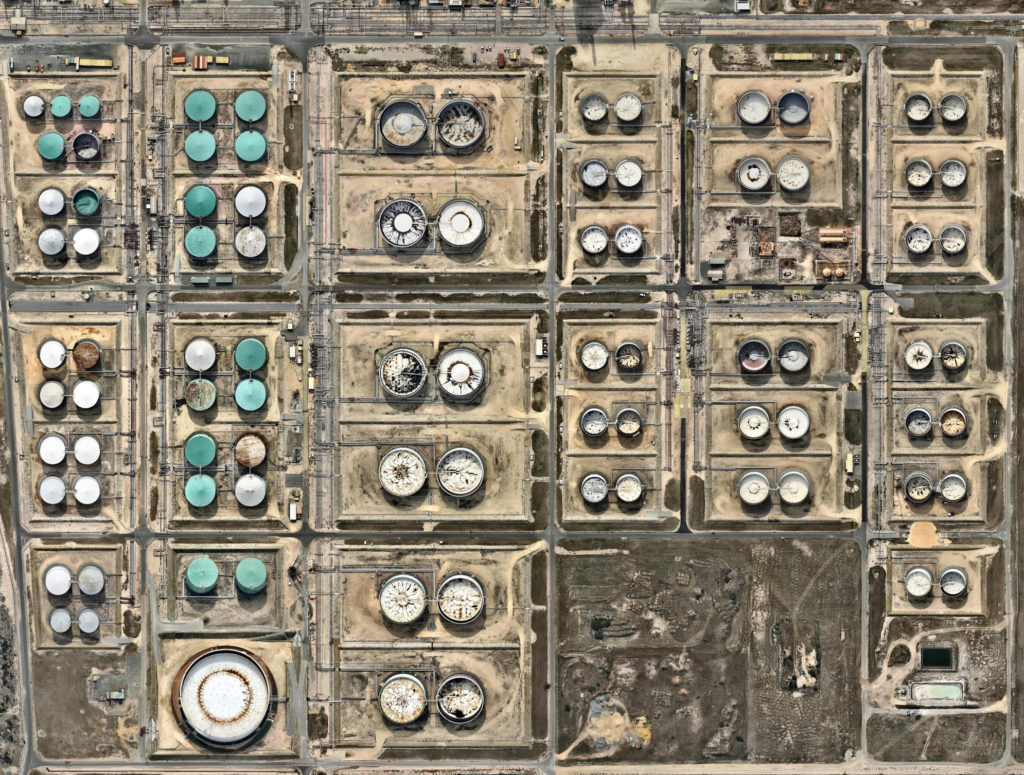 Global petroleum liquids production topped 100 million BPD in October, which was more than 2.5 million bbl higher than a year before, according to the International Energy Agency (IEA).

The group has noted that while supply is falling in Iran and Venezuela, the rest of OPEC along with Russia and the US are more than making up for it. And as has been the case for decades, a number of factors will dictate the outcome of where new output growth will come from over the next few years.

In the US, greater scrutiny is being placed on just how many horizontal wells in a given section the shale sector can economically develop going forward. In South America, analysts are watching to see what becomes of Argentina’s budding shale sector, which appears on pace for solid production growth over the next few years.

And the world will continue to keep its eyes on the Middle East too, as projections show the region will remain the largest source of conventionally extracted crude.

US Well Density May Shift Toward Less

This month, the US Energy Information Agency (EIA) announced that the US is on track to exceed more than 12 million B/D by mid-2019. The figure is based on a projected year-over-year increase of 1.16 million B/D, and would come mostly from the country’s still-booming shale fields. In August of this year, the US topped 11 million B/D for the first time.

Despite the record output, there are signs that the shale sector will face headwinds as it continues the upward climb. One involves increasingly common occurrences of well-interference, including frac hits, which have become a defining factor for some US infill drilling programs.

The issue has been cited by a number of operators who have recently retreated from previous predictions of how close together they would drill wells. While the wider implications of this remain unclear, the challenge facing these operators is to show that they can still achieve estimated ultimate recoveries in key oil-rich shale plays with fewer wells.

In Oklahoma, RS Energy Group analyzed several of the largest operators of the state’s prolific STACK play that initially tested development strategies of eight to 14 wells per section. “However, child wells in many of these pilots exhibited greater-than-expected degradation in production due to well interference,” the Calgary-based research firm said in a report it issued this week.

RS Energy says Devon Energy is looking at similar well densities of four to eight wells in an area of the STACK it first tested for nine to 12 wells. In its revisions, Devon noted that geological heterogeneity, interference with vertical wells, and flowback issues were all factors in the lower-than-expected productivity results seen during its pilot phase.

“Despite the turbulence, these spacing pilots bring us one step closer to understanding optimal spacing in the STACK and suggest that wider spacing assumptions may be necessary to maximize acreage values,” the report concluded.

Outside of Oklahoma, operators in the Permian Basin and Eagle Ford Shale of Texas have also made recent statements on the need to consider lower-density developments.

Oslo-based Rystad Energy issued a new report this month that said Argentina’s Vaca Muerta shale basin has the potential to become the “next Permian” and noted that it is three times larger in geographical size than the Texas basin to which it is commonly compared with.

The report from Rystad predicts that operators in the Vaca Muerta will have added between 140-150 hydraulically fractured wells to the country’s inventory by year’s end—with only three being vertical wells. The horizontal figure is up from almost 50 drilled in 2015.

This puts the country on track to see a 20% growth in fracturing activity to at least 2021, at which point it may reach an annual tally of almost 250 newly completed horizontal wells. For context, the US shale sector has drilled about 127,000 horizontal wells, the overwhelming majority of which came on since 2000 according to data from the EIA.

The modest rise of Argentina’s shale sector should however result in a significant uptick in production, rising from the 60,000 B/D that it managed this year to 160,000-200,000 B/D by 2021. But along the way, operators must overcome a long list of growing pains that come with geographically expansive and capital intensive shale developments.

“There are several major bottlenecks that are currently affecting Vaca Muerta—proppant, infrastructure, labor, pressure pumping and the macro economic situation in Argentina. In addition, investments need to be made in water transportation infrastructure as drilling and completions increase within the region,” wrote Ryan Carbrey, the senior vice president of shale research at Rystad.

The report noted that the country has six service companies providing pressure pumping services but that achieving “acceptable margins” has been difficult thus far. Solving this issue will be critical to drawing in the investments needed to fuel the future of the Vaca Muerta.

But the biggest near-term constraint facing the region involves the supply of proppant, or sand. Rystad expects sand demand to grow 34% by 2021. This will require expanding existing mines and establishing in-basin mine; the latter will help alleviate long trucking distances of around 600 miles. “This will bring total sand supply from 870,000 tons in 2018 to 2.5 million tons in 2021,” said Thomas Jacob, the lead proppant market analyst at Rystad. 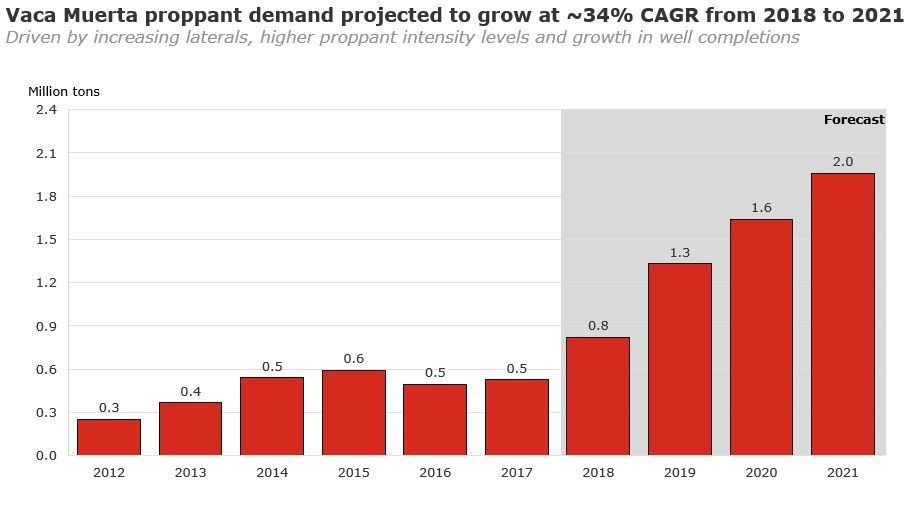 A separate report from Rystad has highlighted that Middle East producers will grow their conventional oil output by 2.7 million B/D by 2025. The research firm credited much of the figure to Iraq’s projected growth of 1.5 million B/D, which would mean the country is set to surpass 6 million BPD in total production.

An additional 1.2 million B/D of supply is expected to come from Iran, the United Arab Emirates (UAE), and a reactivation of the Neutral Zone (shared by Saudi Arabia and Kuwait).

Rystad’s research shows that Iraq is ramping up production from well-established oilfields, especially in its largest in the south, but that new expansion projects elsewhere hold potential to add 550,000 B/D over the next several years.

In Iran, economic and trade sanctions imposed by the US have led the analyst to project a year-over-year production decline of 700,000 B/D, an estimate that Rystad described as “conservative” since waivers to the sanctions have been tentatively approved for several importing nations. If sanctions were lifted by 2021, the country would be expected to reach a 90% pre-sanction output in short time. By 2025, the renewal of stalled projects could combine for 375,000 B/D of additional supply.

Thanks to a series of newly sanctioned projects, Rystad sees the UAE growing from about 3 million B/D today to 3.7 million B/D in 2025. Meanwhile, Saudi and Kuwait are in negotiations to resume production from their shared oilfields in the Neutral Zone, which have been shut-in since 2015. A restart of these fields, per Rystad, would add as much as half-a-million B/D to global markets in the medium term. 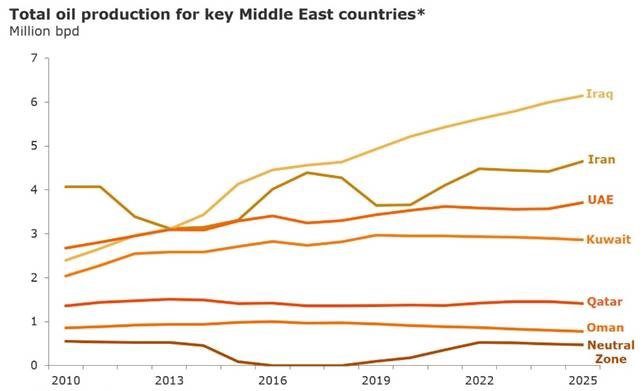