Within just a few hours of testing, this microfluidic chip can tell an oil and gas company whether its chemical selection will increase yield, or damage the reservoir. Image sources: Interface Fluidics.

With its ability to replicate little slivers of reservoir rocks, microfluidics is giving the oil and gas industry a new way to capture images of interactions between chemicals and hydrocarbons. The biggest advantage this emerging technology holds over more established research tools is that it can capture the images at all.

“You actually see what it looks like when the oil, water, and chemistry all interact, and that means we are making direct measurements of the performance characteristics,” explained ­Stuart Kinnear, the chief executive officer of Interface Fluidics.

The Edmonton, Alberta-based startup of just 3 years is generating increasing interest among operators and suppliers that want independent reviews of whether particular production-­enhancing chemicals will work inside a reservoir as advertised. The work places it amid a small group of firms trying to take microfluidics from its native home in the biomedical sector and into the oil field.

Interface Fluidics’ innovation is a type of microfluidic chip that is etched from a postage-stamp-sized strip of silicon and glass to form what it calls a “reservoir analogue.” Depending on the inputs, such as data obtained from rock samples or even industry literature, a blank chip can in a matter of a few hours be turned into a tiny duplicate of a porous sandstone from Alberta or the nanodarcy pathways of the Permian Basin’s Wolfcamp Shale.

“We can also copy-and-paste to make a hundred or a thousand copies if you wanted to,” added Kinnear, highlighting another advantage that microfluidics offers over relying solely on analysis of real rock samples: repeatability. Thanks to the chip-making process, “you know the only thing you are changing run to run is the chemistry.”

To simulate reservoir-like conditions, the chips are heated, pressurized, and loaded with samples of the crude and water from the look-alike’s actual field. Videos taken as chemicals are introduced reveal how the medley of fluids mobilize around the artificial pore structures and get oil flowing, or not. Kinnear described this element as the technology’s “killer app.”

Because each chip is transparent on one side, a microscope-mounted camera can be used to document experiments with high resolution. Prized by first-adopters, the recordings explain what drives flow behavior, e.g., phase trapping, wettability modification, solids deposition, or emulsion. 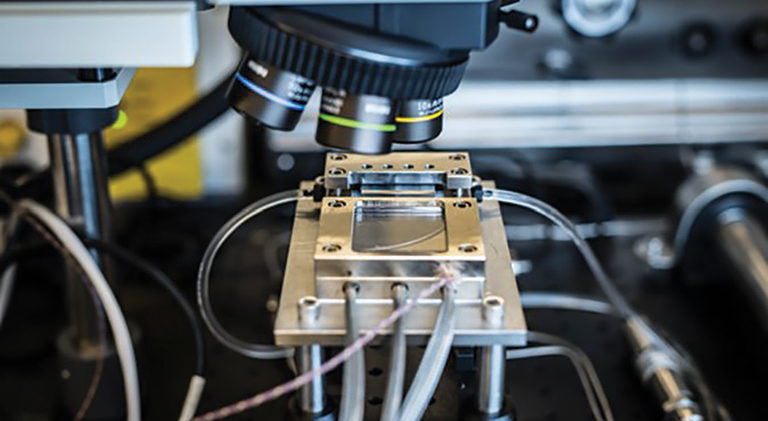 About the size of a postage stamp, each microfluidic chip is transparent on one side. This allows them to be connected to a test manifold and placed under the watchful eye of a microscope-mounted camera to record the fluid-to-fluid interactions.

For at least one chemical maker, that window into porosity has become a critical tool for validating its own emerging technology, a new line of nano-surfactants tailored for shale reservoirs.

“The visual aspect is something we’ve never had before, and that really helps us understand what’s going on,” said Bill O’Neil, the research director at Chem­Terra Innovation, the chemical subsidiary of Calgary-based service provider Trican Well Service. Its pilot with Interface Fluidics, details of which were published in March (SPE 189780), resulted in the company moving forward with a significantly larger study that is still underway.

Norway’s Equinor has also formed a commercial partnership with the startup after selecting it this past summer for a mentoring program it runs with a technology accelerator called Techstars. Upcoming pilot projects will touch the operator’s assets in the North Sea and in the US where it operates hundreds of shale wells.

Nikolai Lyngø, the senior vice president of corporate strategy and innovation at Equinor, said engineers are assessing the microfluidics platform to see how it could be used throughout the life cycle of some of the company’s biggest assets.

“If this can continue to be developed, then it has a huge potential,” he remarked, adding that successful trials could lead the technology to “a broad implementation” across the operator’s portfolio.

Scaling up new technologies is never straightforward, but helping Interface Fluidics’ chances is that its approach is being regarded as very affordable. The firm credits the low cost of its devices with enabling tests to be done for less than half the price of complex corefloods that cost as much as $12,000.

Outside of the economics, one of the other things Lyngø appreciates most about the technology is its focus on addressing the fundamentals of reservoir performance vis-à-vis fluid interactions. “The idea that they’re working on is so close to our core,” he said. “To look at an oil and gas company and where its value is really created, you need to understand the reservoir—that’s where it starts.”

Extreme close-ups of a microfluidic chip designed to replicate a hydraulically fractured tight-rock matrix. The images highlight the details afforded by a microfabrication process known as ion etching.

Most of the exposure the oil business has seen so far with microfluidics has come from the experimentation taking place in research labs at petroleum engineering schools. The short list of companies known to be testing the upstream market includes Schlumberger and another startup called RAB Microfluidics.

The absence of more players is largely because for the better part of this century the technology has been the near-sole domain of the biomedical sector where it became popularly known as a “lab on a chip.” In the hands of that community, microfluidics became a hotbed for innovation in areas around DNA and cell-level cancer analysis, along with an extensive number of developments for diabetes.

In October, BP issued a top prize £60,000 to RAB Microfluidics through an accelerator program it sponsors in Aberdeen called the Oil & Gas Technology Centre. The startup’s “sensor-on-a-chip” is designed to monitor lubricant oil for quality and contaminants.

The first prototypes are being deployed to offshore companies to provide real-time data that can be used to give advanced warnings of when to maintain their mission-critical machinery: compressors, turbines, cranes, and topdrives.

“Think of it as a health-status check, like when you want to do a blood sample for a human being to find out what is wrong,” said Roy Bitrus, the director of RAB Microfluidics. “It’s the same concept with what we’re trying to do—the only difference is that we’re using the microfluidic technology to detect the changes in the chemical composition in the oil.”

Being based in Edmonton, and having a co-founder with experience within Canada’s heavy oil sector, led Interface Fluidics to begin its track record working on SAGD projects, or steam-assisted gravity drainage. One of them involved a bitumen producer that spent more than a year and a million dollars testing several foaming agents before selecting one to deploy. In the end, the winning candidate was never used.

Completed within a few hours, a microfluidic test of the foam demonstrated that the original analysis fell victim to a false positive. “What they thought was the performance of the foam was it actually precipitating out of solids,” said Kirstie Boyle, the director of market development for Interface Fluidics. “Had they put that down hole, it would have damaged the reservoir.”

In unconventional settings, a key driver of uptake has centered more on how different mixes of chemicals work together, “and in some cases, we find surprising incompatibilities,” said Kinnear. He pointed out how modern hydraulic fracturing fluids involve a complex suite of products that comprise friction reducers, flowback aids, biocides, and probably a few other additives.

Comingling a polymer with the wrong set of chemicals might create unexpected reactions that end up clogging pore throats. The type of salts within the produced water pumped out of one formation could also result in scaling if reused for hydraulic fracturing in a different area.

One Emerging Technology Helps Validate Another

One of the newest trends in fracturing mixes is the inclusion of nano-­surfactants that shale explorers are using to promote early-time production from their horizontal wells. But one lingering issue with these new chemistries is that it has been difficult for companies—both consumers and makers—to prove exactly how they work.

“The traditional lab techniques are not useful,” said O’Neil from Chem­Terra, pointing out that specialized imaging technology such as X-rays and computer tomography (CT) work best with cores from conventional reservoirs. “But when you’re getting into microdarcy to nanodarcy, it’s really hard to see anything with a CT or even a micro-CT.”

Acquiring enough quality rock samples to run large numbers of tests is also difficult, he said, as is dealing with the variance between those samples. Additionally, coreflooding analysis can take months to complete for unconventional rocks. While ChemTerra still uses cores to confirm what it is seeing in the chips, it no longer relies on fuzzy inferences or theoretical ideas about what is happening inside them.

Interface Fluidics has recently hired reservoir engineers to better define all the fluid-to-fluid reactions it is seeing. Some of the reactions bear such a strong resemblance to how celestial bodies move around the solar system that the firm also brought on an astrophysicist. The new hires are helping create computer vision algorithms that will automate the analysis.

Even without that digital component, ChemTerra says the videos have been compelling enough to quash speculation around what mechanisms enable its nano-surfactants to promote production. “It’s really shown us that this is an interfacial tension reduction phenomenon, and if you’re more efficient at reducing interfacial tension, then you get a better sweeping efficiency,” O’Neil said.

Jens Festervoll, a senior advisor of corporate innovation at Equinor and the corporate liaison with Techstars, has reviewed a number of use cases for Interface Fluidics’ technology. Similar to how ChemTerra is using the technology, he shared that the operator is also focused on its ability to steer selections of chemical packages that will maximize early shale production.

In explaining the urgency behind this driver, he said despite shale wells having “very long tails, you want to get as much out of them in the beginning because that’s when you have the most pressure and productivity from the rock.”

Learn more about the latest developments in oilfield chemistry at the SPE International Conference on Oilfield Chemistry, 8-9 April 2019 in Galveston, TX.