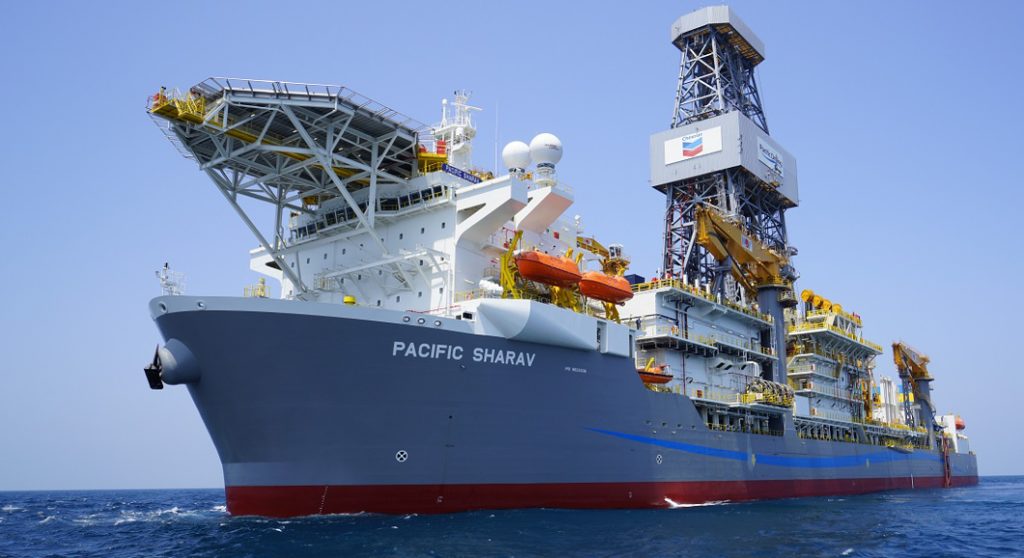 Exploration in 2018 got off to a strong start when the Chevron-operated Ballymore well encountered 205 m of net oil pay in the US Gulf of Mexico. Drilled by Pacific Drilling’s Sharav deepwater drillship, the well reached a total depth of 8,898 m. Source: Chevron.

Global discovered oil and gas resources and big project sanctions are expected to remain on the upswing through next year, according to separate industry outlooks from Rystad Energy and Wood Mackenzie.

Internalizing lessons from a difficult last few years, operators are choosing investments more wisely and now better prepared to deal with volatile oil markets, the consultancies concluded. “Oil and gas companies can cope with whatever is thrown at them in 2019," said Tom Ellacott, Wood Mackenzie senior vice president. "Portfolios are set to weather low prices, and the recent slide in prices justifies the sector’s conservative mindset."

While exploration spending rose in 2018, the figure was down 61% compared with 2014, aided by a decrease in exploration costs, Rystad data indicate. And, importantly, companies are reporting a better success ratio on new prospects. Rystad expects operators to again increase exploration investment in 2019, possibly resulting in an even higher volume of oil and gas being found.

“This not only proves that [exploration and production] companies are once again willing to invest in exploration but also highlights their idea of smart investments to derisk expenditures as much as possible,” said Palzor Shenga, senior analyst on Rystad’s upstream team.

Rystad projects global discovered oil and gas resources for 2018 to total 9.4 billion BOE, bolstered by major offshore finds in Guyana, Russia, and the US. The global reserve replacement ratio is slated to increase to 15% in 2018 from 11% a year earlier.

During the year, ExxonMobil’s 10th discovery off Guyana boosted its estimated recoverable resources from the Stabroek block to 5 billion BOE. Novatek’s first exploratory well in the shallow-water North Obskoye block off Russia marked the year’s biggest find with estimated recoverable resources of 960 million BOE. In the US Gulf of Mexico, Chevron and Shell respectively uncovered some 728 million BOE from the Ballymore and Dover discoveries, Rystad estimates.

Offshore areas near Cyprus and Russia also moved the needle, adding cumulative recoverable resources of 1.6 billion BOE, Rystad estimates. Eni said its Calypso discovery confirmed the extension of a “Zohr-like” play in the Cyprus Exclusive Economic Zone, referring to its giant Zohr gas discovery off Egypt that started production in late 2017. Quadrant Energy’s offshore Dorado oil discovery on Australia’s North West Shelf is said to be one of the country’s biggest ever.

Deepwater oil discoveries off Guyana and Brazil from recent years are advancing toward the development phase and expected to contribute to increased project sanctions in 2019. Wood Mackenzie forecasts 45–50 final investment decisions (FIDs) to be made on projects it considers large, or those with more than 50 million BOE of commercial reserves, compared with 40 FIDs in 2018.

As for US tight oil, investment will continue to flow into the Permian Basin of West Texas and southeastern New Mexico, where majors and big independents have expanded their acreage positions and operations to accommodate "full-scale industrialization,” Wood Mackenzie said. More mergers and acquisitions among large Permian operators are expected in 2019.

However, given continued takeaway capacity constraints during first-half 2019, Wood Mackenzie believes Permian producers will not be able to duplicate the 1 million B/D of tight oil growth achieved in the basin during 2018. But it forecasts still-sizeable growth of 650,000 B/D next year.