Shale’s Big Sand Switch Is Delivering Dollars, but Not Eroding All Concerns 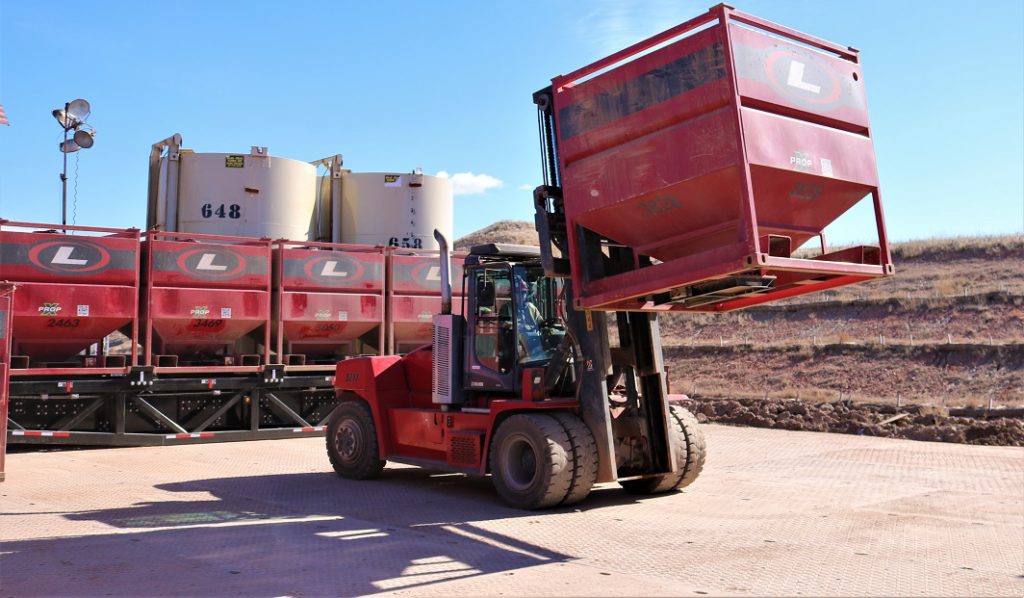 Shifting Sands: Enabling the shale sector’s move toward a wider variety of proppants are new logistics technologies that include silos and sand containers that offer quicker offloading and storage for large hydraulic fracturing jobs. Source: JPT

Where shale producers in Texas are getting their proppant has turned out to be one of the sector’s most significant market transformations since the onset of the oil industry’s downturn.

The 4-year movement toward using regional sands from within the state has been a major economic win for the operators leading it. The production results are encouraging. Supply chains are more efficient. Yet, there remain long-term concerns.

Distinguished by their roundness and high-crush strengths, northern white sands from the US Midwest had served as the ubiquitous proppant of choice for much of the unconventional revolution—supplying 75% of the sector’s frac sand in 2014. Then crude prices collapsed.

Northern white sand accounts for just over 40% of today’s market. Nearly a quarter of the supply now comes from within the Permian Basin thanks to more than a dozen new in-basin sand mines that opened within the past year.

The additional supplies have forced the premium northern white sand suppliers in the US Midwest into price parity with the regional sands in Texas. However, without the need for cross-country rail shipments from Wisconsin or other northern states, the all-in cost of the Texas alternatives is actually about 60% less—amounting to a reduction of $40-$50 per ton.

Previously, operators avoided the use of these regionals sands due to their lower quality. The fear was that their more brittle grains tend to compact quicker, cutting off hydrocarbon flow from within the fractured reservoir. But for the most intense horizontal well designs that use 40 to 50 million lbs of sand, the arbitrage can amount to more than $1 million of freed up capital per well.

“The way I look at it is, if you can save that much money, then it doesn’t take very long until you’ve already funded a new well,” said Scott Forbes, a proppant expert with the consultancy Wood Mackenzie.

Forbes has been visiting the in-basin mines in Texas and speaking with buyers for the past year. In terms of production issues, he has heard of isolated cases where improper sand cleaning operations at some of the new mines may have contributed to poor well completions.

Overall though, the sentiment Forbes has picked up on from the shale patch is that the gains outweigh any minimal losses seen so far. Companies that were the first to switch to regional sands “are pretty well sold on it,” he shared, adding that their gains are creating pressure on the holdouts to follow suit.

The big sand shift started early on in the downturn as producers in Texas sought economic refuge by “debundling” their reliance on service companies and sourced brown sands (i.e., Brady or Hickory Sands) directly from mines in the central part of the state. The second act—the arrival of the in-basin operations—is solidifying the transition sooner than many anticipated.

Kent Syverson, chair of the department of geology at the University of Wisconsin, has been tracking the proppant sector for several years and said the development represents the biggest shakeup in the US sand market since its inception.

He explained that the ongoing demand destruction of northern white sand is being exacerbated by a recent confluence of factors in the Permian: producers exhausting annual budgets, limited pipeline capacity slowing down drilling, and the arrival of the new mines—some of which operators have taken full or partial ownership of.

“All of those things kind of came together in August and started to dramatically reduce the demand for northern white sand—and its price,” he said. “It’s amazing how fast it has set in.”

Rystad Energy issued a market analysis in December that concluded that “the adoption of in-basin sand in the Permian has evolved at a faster rate than we initially expected.” The report cited a “long list” of more in-basin mines still under construction that may yield an annual increase of 25% in US sand supply by the end of 2019.

Forbes also forecasts that uptake of regional sands in Texas will continue and is seeing the increased competition pushing suppliers to offer incentives such as first-time customer discounts. He also expects in-basin mines to become a sectorwide norm. Oklahoma and the DJ Basin in Colorado and Wyoming are seen as the up-and-comers in the sand play.

“Anywhere that has activity today, if there’s not already local sand presence, there are companies looking to find local sources,” he said. “Eventually, I think there will not be a play out there that doesn’t have local sand capabilities.”

Outside of the savings, a main pillar of the shale sector’s confidence with in-basin and brown sands is that they are almost as durable as the northern white sands.

This is a measure of crush strength, which for the northern white sands (depending on mesh size) can exceed 10,000 psi; viewed as strong enough to withstand the forces of fracture closure stress in most US shale plays. A number of the in-basin and brown sands top 8,000 psi ratings; viewed as good enough to cover all but the deepest and highest pressure formations.

However, comparable crush strengths have not fully eroded the original concerns for all the experts.

Jennifer Miskimins, an associate department head of petroleum engineering at Colorado School of Mines, warned against overweighting crush strengths since the shape of the sand grains is known to be an undermining factor.

She explained that northern white sands have earned their premium status thanks to being blown back and forth over long geologic stretches, giving them their robust, spherical shape. In-basin and brown sands have not benefited from nature in the same way, and generally have crystal structures with sharper corners.

“With that angularity, the sand inherently packs tighter and maybe has a little less crush strength, so it tends to have lower conductivity right off the bat,” Miskimins said, adding that this degradation, or compaction, grows worse over time as the angles of the crystals “cut into each other and break pieces apart.”

Looking for these effects within the data can be a difficult task since shale producers often need a year or more of production to establish key factors such as drainage areas or estimated ultimate recoveries. Equally challenging is the ability to isolate performance drivers when horizontal well designs pre-shift used sand volumes that were several times smaller than what is used today.

“So things can look really good early on,” Miskimins points out. “The question is, did you over-capitalize because you put in 100 [fracture] stages?”

What The Testing Says

Core Labs’ Stim Lab Division is one of the companies that shale producers are asking to help assess the quality of in-basin sands. Robert Duenckel, vice president of Stim Lab, has published extensive research on proppants and said the firm’s analysis shows that in-basin sands skew toward a lesser quality but are often comparable to Brady (or brown) sands—but none proved to be as good as white sands.

“It’s quite a range of performance,” he said of the in-basin sands. “But we haven’t seen any that perform better than what we typically see for the Brady sands.”

Most of the analysis on in-basin sands is based on physical property testing, which Duenckel said offers a “snapshot” of a sand’s physical characteristics such as roundness and crush strength. To get a more complete understanding, he emphasized that conductivity tests are essential.

A conductivity test would reveal how a sand holds up under formation stresses and temperatures. However, these tests are more expensive than the property tests and thus fewer are run.

This has left Stim Lab with a limited data set to issue nuanced conclusions on in-basin sand conductivity. But an ongoing study will use computer models to shed more light, including the long-term degradation of in-basin sands and potential impacts on well performance.

Despite the current constraints, Duenckel said early results indicate that in-basin sand quality will be a bigger issue for higher-quality reservoirs (i.e., those with the most resource potential), which “should logically require a better proppant with higher conductivity.” In these scenarios, he expects degradation is more likely to “eventually show up in terms of poor performance.”

Though more data is needed to fully assess the performance of in-basin sands, there is enough to scrutinize the surge of brown sand usage.

After combing through public data on more than 20,000 brown sand wells in Texas, researchers with Rystad found no clear correlation to negative production. All of the examined wells were in either the Permian Basin or Eagle Ford Shale and had been producing for at least 12 months.

“If you look at the type curves, they have been going further up in the graph,” said Thomas Jacob, a senior analyst at Rystad. The low-price factor coupled with the lack of negative signals “is the reason why you’re seeing a lot operators switch to in-basin sand or the local sand that’s available.”

What the data points to is that better acreage positions and improved fracture designs are bigger influencers or production than the sand being used. The results of the study were published this year during SPE’s Annual Technical Conference and Exhibition (SPE 191423).

The researchers acknowledged that the public data might not illuminate the entire production picture. But if there is an economic impact on the long-tail of a well’s productive life, the early payout is providing comfort. “Everyone would prefer to have money in hand now, not later,” Jacob said.

Despite its diminishing standing as the pre-eminent frac sand supplier, the US Midwest will still hold plenty of buyers in the major basins that are closer to home: Bakken, Marcellus, and Utica Shales.

But stability is about the best the northern white sand market can hope for, according to most projections that forecast output to maintain current levels for the next few years.

That could change though. Several mines shut down over the summer, while others reduced output—leaving open the option to shutter.

“And we’re probably not done,” Syverson said, noting that some companies may proactively mobilize their equipment to set up new roots in Texas and Oklahoma, or sell it to the new mine operators already there. Whenever the machinery is cannibalized, “at that point, the capacity is never going to come back here in Wisconsin.”

Shale’s Big Sand Switch Is Delivering Dollars, but Not Eroding All Concerns