A key component of sustainability is human lifestyle—meeting not just the basics, but for all people to have the opportunity to grow, develop, and prosper. Unquestionably, access to energy is a key component of achieving this goal. Having an adequate, reliable, affordable, environmentally-cleaner and uninterrupted supply of energy is crucial. Despite the calls to immediately cease using fossil fuels, hydrocarbon resources are essential to support the global economy. We cannot achieve a sustainable world in the long term without access to oil and gas. Currently, more than 50% of world energy demand is met by oil and gas. The difficult and yet-to-be-answered questions in the energy industry are the timing of oil and gas depletion and the energy mix afterward.

Will oil remain as the primary source of energy at the end of this century, especially in the transportation sector which currently consumes from 75 to 80% of the oil produced? Will gas remain as a primary source of energy for power generation and petrochemicals by the end of this century? Even with renewable energy growing by 400% or more, when will there be enough of these sources to replace oil and gas? Will they be practical for transportation? No one disagrees that oil and gas are depletable energy sources, and that we must find other sources of energy to replace them if mankind’s lifestyle on Earth is to be maintained or improved for hundreds, or I may say, thousands of years to come. However, knowing precisely when this will happen is quite challenging.

The oil and gas industry long ago embraced the challenge of finding and producing enough resources to meet growing world demand. Replacing what is produced each year isn’t enough; as demand grows, production capacity must grow, which means discovering more resources. We’ve met that challenge. How? By making enormous investments in research and development (R&D).

There is absolutely no doubt that the last few decades’ R&D efforts have reduced uncertainties on the exploration side and have increased recovery efficiency. Thanks to newly developed technologies, fields that were not economically feasible before are now being developed. We’ve learned how to economically and safely produce tight and unconventional resources, and those in hostile environments. All of this has resulted in significant reserves addition and recovery increases.

Even as production has increased significantly over the past 2 decades, published reports show that global oil and gas reserves have grown. The 2018 BP Statistical Review of World Energy highlights that from 1997 to 2017 global oil reserves increased by 46% (from 1.162 to 1.696 trillion barrels) and gas reserves grew by 51% (from 128 to 193 trillion cubic meters). This increase happened despite increased consumption of oil and gas during those decades. Not only did we replace production, we added 534 billion additional barrels of recoverable reserves, which will help to meet future demand.

It is important to mention that many reserves figures are based on an aggregate recovery factor around 40%. The remainder of the oil left in the ground is a target for enhanced oil recovery projects that can add to recoverable reserves and for other technologies yet to be developed.

Published reserves figures also include shale oil and gas only in the US. The potential of shale oil and gas is still being assessed globally. The US Energy Information Administration (EIA) has estimated global shale oil recoverable reserves at 345 billion barrels (20% of conventional global reserves). The recovery factor of these unconventional shale resources is much less than equivalent conventional resources, leaving more resources for future yet-to-be developed technologies. The EIA estimate is likely to increase as hydraulic fracturing technology continues to advance and as the assessment of unconventional global reserves is completed.

While data to quantify R&D investment across the oil and gas sector are not available, I believe that most of the reserves increase in the past 2 decades can be correlated to the significant R&D investment that has been made by our industry. During this period, most of the large producers and service companies have significantly increased their R&D investment. While the downturn affected things for a couple of years, many companies are increasing spending on R&D to former levels.

Many smaller companies have also focused on R&D within a specific technology area relevant to their business, bringing new, more efficient products to market. Companies have opened several specialized oil and gas R&D centers around the world and partnered to launch global technology hubs with research institutes and universities.

My company, Saudi Aramco, has exponentially increased its R&D spending over the past 20 years and has launched new R&D centers in North America, Europe, and Asia. I know that other companies have made similar investments. As our industry continues to meet the challenges of difficult-to-produce reserves and harsh environments, R&D will lead the way to our success.

In early 2018, DNV GL released an industry outlook called Confidence and Control, based on a survey of energy industry executives. As part of that survey, they asked about the top priorities for R&D and innovation in 2018. Results are shown in the table below.

Digitalization is an area where we are seeing benefits across the industry. Most of the other items identified as priorities are needed to move us forward in terms of efficiency in finding, developing, producing, and transporting oil and gas. 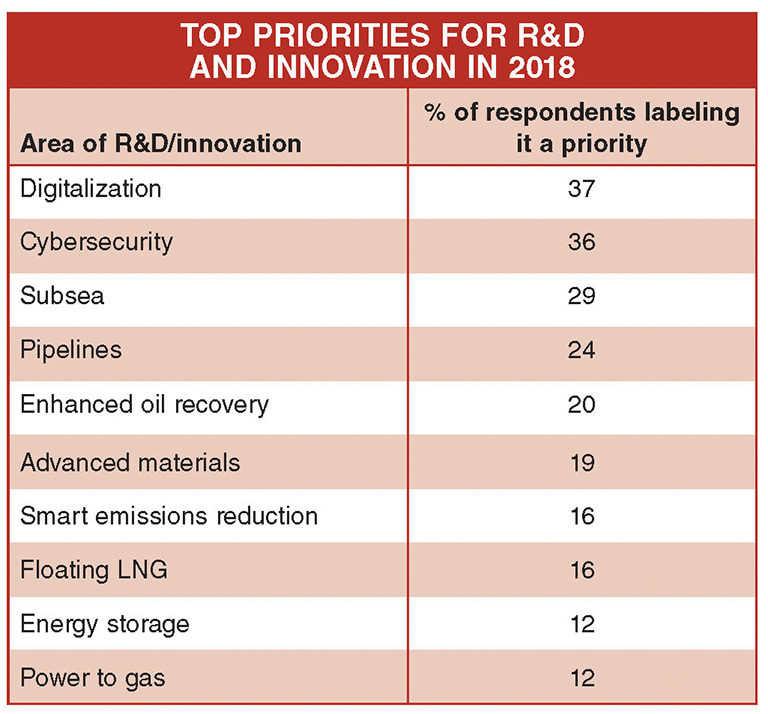 The noticeable increase in R&D investment has generated numerous advanced technologies in the past few decades that have helped the oil industry discover more oil and gas fields and increase the recovery factor from existing and newly discovered fields to reach a level that was never thought of in the past. While our industry has a reputation for being slow to adopt new technologies, the financial challenges of the past few years have seen us embrace technologies that allow us to operate more efficiently and cost effectively fairly quickly. That is likely to continue.

SPE currently has an R&D Technical Section with more than 5,300 members. Over time, this group has published series in JPT on “Technology Tomorrow” and “Spotlight on R&D.” The E&P industry faces numerous challenges as it addresses growing energy demand, the need for sustainable operations, declining production from older reservoirs, and new resources in harder-to-reach and harsher environments. This led the group to identify the “Grand Challenges” facing the upstream industry: higher-resolution subsurface imaging, challenges in reusing produced water, in-situ molecular manipulation, increasing hydrocarbon recovery factors, and carbon capture and sequestration. Improvements in these five areas have the potential for significant impact across our industry. You can read more about these at https://www.spe.org/industry/globalchallenges.php.

I have no doubt that alternative and renewable sources of energy will grow in the future energy mix. Nonetheless, oil and gas will continue to be a key part of the energy map in the long term, especially for transportation and petrochemicals. Ongoing R&D activities and investments around crude-to-chemicals by the oil industry can potentially create new noncombustion uses for oil. R&D efforts by our industry, including academia, will generate technologies that will continue to open new opportunities to produce every drop of oil and molecule of gas, leaving nothing behind in the ground. These contributions are important to support global energy sustainability from the supply side. Our industry has been recognized as the most reliable source of energy and will continue to be as such. We should be proud to be part of an industry that measurably improves human life.