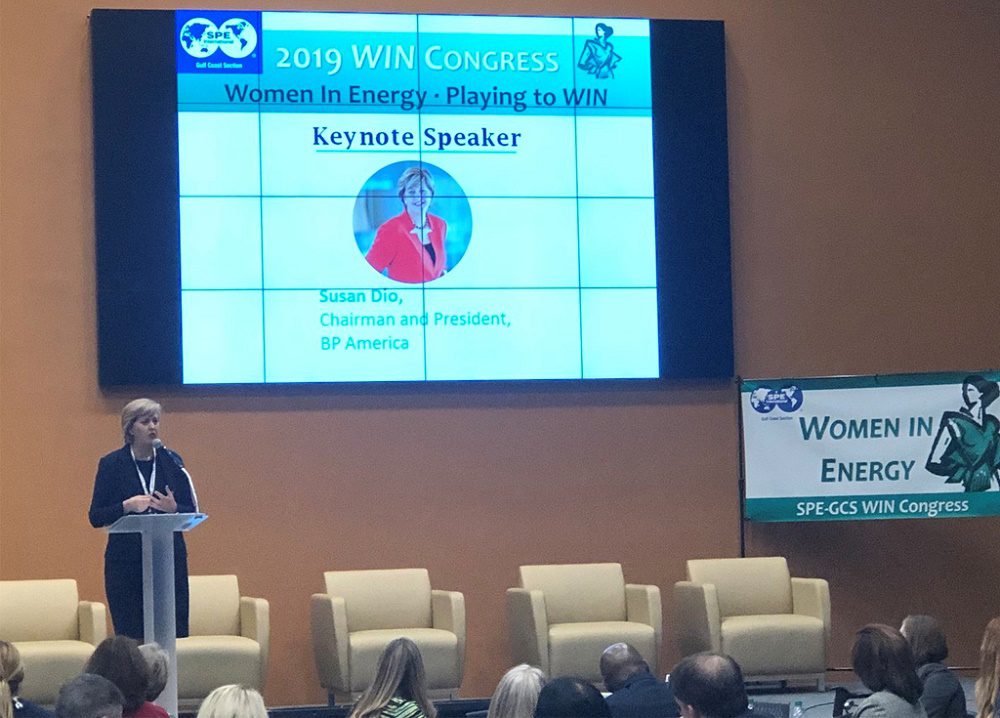 The inaugural SPE Gulf Coast Section Women in Energy Congress featured a variety of perspectives on the gender-gap issues challenging the oil and gas industry today. Women and men from different industry sectors spoke about the need for greater diversity in leadership roles, various best practices for encouraging that diversity, and the steps needed to overcome possible gender biases in the workplace.

The speakers at the event also shared their stories on how they achieved success in the industry, and a common theme among them was the hard decisions they made to get where they are. Susan Dio, BP America chairman and president, discussed this in her keynote address. Dio’s address focused on the role women and minorities will play in helping the industry produce energy for a growing world while advancing the lower-carbon transition. She also talked about the role leadership plays in building more inclusive cultures within companies. Dio said “the research is clear” that companies that embrace diversity and inclusion perform better, but there is “not a magic answer” for achieving those goals.

To that end, Dio said some sacrifice may be necessary. She pointed to her own trajectory as an example: Early in her career, Dio said she took manufacturing-based field jobs, but her willingness to travel diminished by the time she had children.

“I’m a big believer that you’ve got to have enough balance, that you’re re-energizing yourself, so one of the sacrifices I made when the kids were young was not taking on roles that would just take 110% out of me. After the kids were grown—and it happened so fast—I was able to do some international assignments. So, some of the sacrifices may have been work/family balance, or definitely being the only one in terms of gender,” Dio said.

The balance between career and family came up often during the congress. Christina Jackson, director of engineering at Honeywell UOP, said she has made specific decisions in her career to stay in her home city of Tulsa because of the familial support network. That did not prevent her from advancing her career, however. Jackson said she has managed teams based in China and India remotely, and she has been flexible in taking on responsibilities.

“I’m willing to travel as long as my home base is in Tulsa,” Jackson said. “I’ve taken remote leadership responsibilities where I have a team that is located nowhere near anyone else, so I could continue to grow. And, when I took a role that required weekly travel, I traveled for part of the week every single week, and that’s a decision you have to make with your spouse.”

Jackson spoke at a panel discussion on traditional vs. nontraditional career paths, and in her career she has weaved in and out of various management roles. She recently left a senior engineering manager position to become the program manager of the integration of a $1.5-billion business Honeywell had acquired, a role in which she was responsible for integrating all parts of that business into Honeywell. While it was not an engineering position, she said understanding of oil and gas operations helped her approach the challenges of the role.

Another speaker at the career path panel, Biota technology director Liz Percak-Dennett, said she found a lot of “personal growth in diversity” and in talking to people outside of her comfort zone. Ellen Vernotzy, general manager of frontier exploration and appraisal for Africa and Latin America at Chevron, echoed similar sentiments at an earlier address. She said it is essential to challenge oneself and challenge the status quo in order to progress in the industry: If a person is not “a little afraid or uncomfortable” about taking on a new challenge, that person is not doing enough.

Vernotzy pointed to an example from her own career to illustrate this point, when she moved from 2 decades of technical roles to become planning manager for Chevron North America Exploration and Production Company.

“I walked into that job and I fully admitted to everyone in that room that I don’t know what I’m doing, and you’re going to teach me. Because, at the end of the day, the reason that I’m there is because they’re going to teach me what they know, and I’m going to bring to the table what I know, and then you synergize it and make it better. The second year is even better. Now I know what I’m doing here, I know what I’ve learned in the past, and now I can be creative and get to something new,” Vernotzy said.