Imaging Shows What is at Fault in Fracturing Job

An operator decided to fracture three wells near an old one, but there was a fault in the vicinity crossing the path of the three laterals. The company decided to go ahead with the fracture anyway to see what would happen.

It got an unusually detailed look. The fluid injected during a zipper fracture of three Anadarko Basin wells that flanked an older parent well was monitored with an electromagnetic imaging system developed by Deep Imaging.

A technical paper presented Tuesday at the SPE Hydraulic Fracturing Technology Conference (SPE 194313) described how the fluid was illuminated by an electromagnetic signal from two transmitter lines placed on the surface parallel to the laterals. The signal picked up by 350 receivers on the ground nearby showed fluid movement and suggested fracture development from 27 stages. 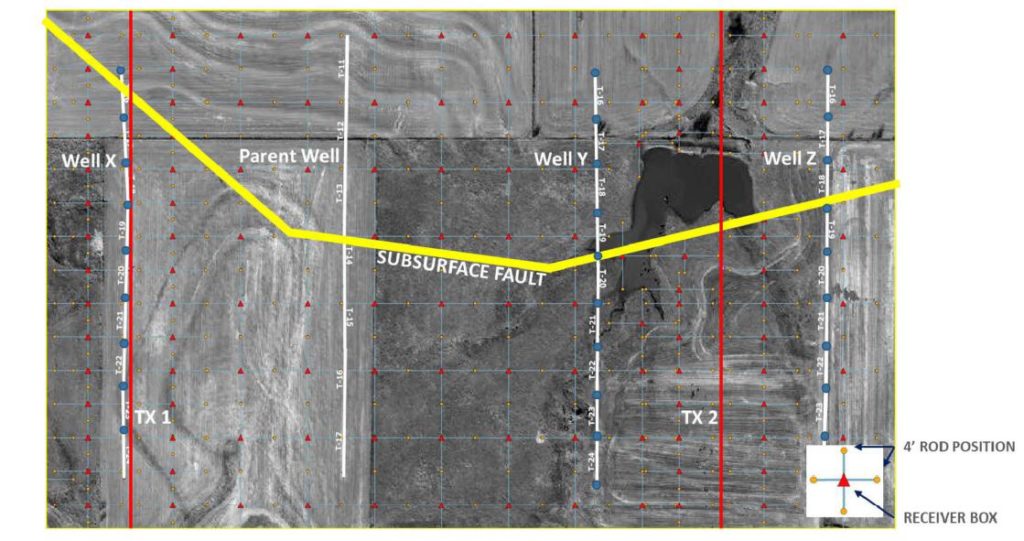 Oscar Vasquez, a geophysicist at Deep Imaging who presented the paper, described how the fault was at the center of the action early on. “A snapshot of the end of the frac shows the direction of a stage in relation to the fault zone,” he said. “The signal is migrating toward the fault zone and, at its maximum extent, it approaches the parent well. The fault zone acted as a conduit for it to migrate through to the pressure depleted zone where it eventually caused a frac hit on the parent well.”

Subsequent stages were drawn in the same direction, repeatedly fracturing the same rock. On one, he said, “The end of the fracture did not travel past the fault zone.”

On a third, Vasquez said a faint electromagnetic signal just beyond the fault suggested a small amount of fluid had moved past the fault. Later stages to the south of the the fault grew according to the plan, along the east-west axis of the dominant regional stress.

Those images, confirmed by microseismic, led to a new drilling plan by the unnamed operator. With visual evidence that the fault was serving as both “a barrier and the thief zone,” the operator “decided to avoid future fracturing near this fault zone,” Vasquez said.

For Deep Imaging, the paper was a chance to show how its system can directly image multiwell fracturing. Inter-well interactions were a major theme of this year’s conference.

That issue is shaping development of the company’s electromagnetic imaging system. For one, it is working to extract quantitative measures of the volume of injected water underground. That will require extracting more information about the strength of the signal now used to locate where the injected water has flowing, said Mark Hickey, principal geoscientist for Deep Imaging.

To be specific, Deep Imaging used controlled-source electromagnetic imaging. It first created a picture of the formations before fracturing began. Then it took minute-by-minute images as the injected fluid moved underground. It isolated the fluid trends by subtracting the details in the baseline image to highlight the fluid.

The company is now working to improve the resolution, where the locations are plus-or-minus-50 ft. from the map of the image. In the case study, it appeared that water from two fractured wells overlapped, but that probably was not the case, Hickey said. The two wells were at different levels in the “wine rack” parent, and the injected water was likely at a separate level.

Within the past year, clients have begun pushing to get results in real time, while they are fracturing. Hickey said the company is moving in that direction, with image processing down to as little as 4 hours.

Imaging Shows What is at Fault in Fracturing Job