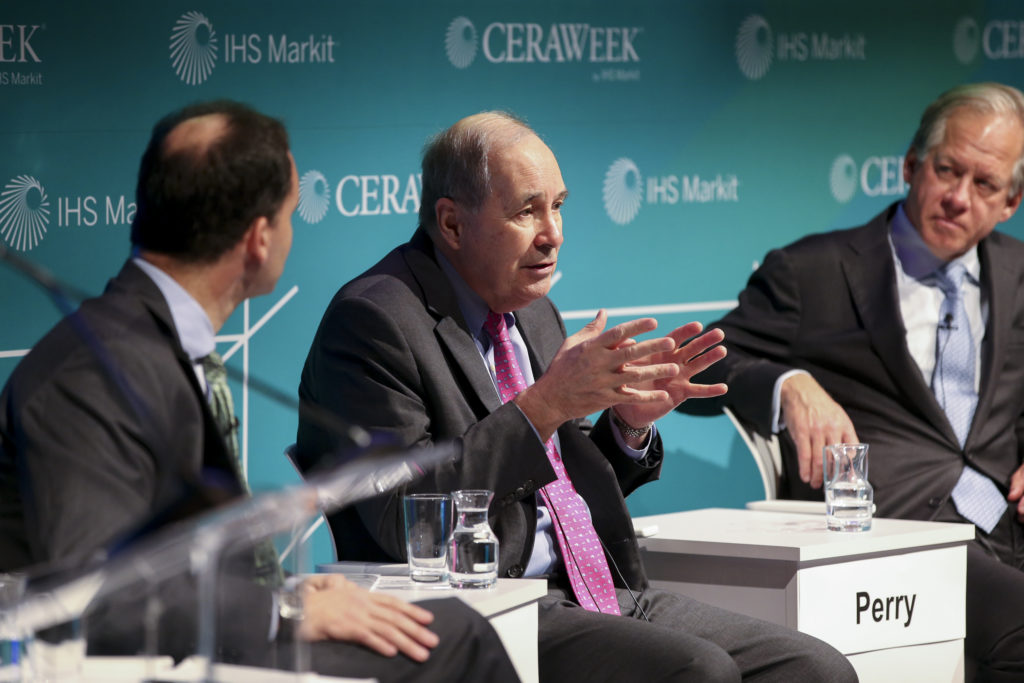 The central debate today in the US shale business is how long productivity growth will continue. According to one of the most influential voices in the sector, the answer is not much longer.

“I am not particularly optimistic that, over the next 5 years, the industry is going to be able to show the year-over-year improvements in well recoveries that we’ve seen over the past 10 years,” said Mark Papa, chief executive officer of private-equity-backed shale producer Centennial Development Resources.

Papa said the two biggest factors at play are frac hits, or parent-child well interference, and a shrinking inventory of high-quality drilling locations.

Known for founding the large independent producer EOG Resources, Papa shared his prognostications during a panel discussion at IHS Markit’s CERAWeek conference in Houston. The annual conference brings together policymakers, executives, and large investors. At last year’s CERAWeek, Papa made headlines for similar, but less nuanced, comments around the ability of US shale production to continue its upward climb.

Short cycle times and presumed repeatability were hallmark features of the shale revolution’s rise at the start of the century. That second pillar though is crumbling away as newer, child wells consistently underperform their older, parent wells. Papa said the typical outcome he sees in the Permian Basin of west Texas is that child wells bring in about 85% of the resource of their offsetting parents.

Prompted to give a prediction on what US production will look like in 5 years, Papa said it could rise to 16.5 million B/D, which assumes a price of about $70/bbl and will include support from the Gulf of Mexico. After that point, Papa sees the shale revolution losing its ability to push output higher because of the increasing influence of spacing and frac hits.

“If you listen to the earnings calls of a lot of these other companies, they’re saying they’re changing their spacing, particularly in the Permian, to wider spacing,” Papa told reporters after his panel talk. He pointed out that wider spacing has become “a euphemism for having parent-child issues.”

“This is not new news,” he continued. “I’m not proclaiming this to be the end of the shale revolution. It’s just that we will have to expect that by 2025 the impact of shale oil from the US will be less powerful than it is today.”

The sector’s technical community has been publishing research on the parent-child well issue in earnest since 2016. But Papa said shale executives are reluctant to speak with investors about the issue “because they’ve advertised to Wall Street that they have so many reserves, so many locations,” both of which might have to be lowered as more information comes to light. In summing it up, he added: “They want to talk about upside, not downside.”

The picture painted by Papa was simple: negative well interference issues and wider spacing (i.e., fewer wells) means shale producers must learn to live with less. This scenario will have the effect of redefining the value of not just an individual well, but an entire field.

Investors have grown concerned over the issue and are asking more questions about it every quarter. In response, executives are opening up with more details. But with investor sentiment trending toward impatience—particularly over the sector’s ability to achieve sustainable returns—fresh infusions of capital are now harder to come by.

On the same panel with Papa, Brian Falik, chief investment officer at Mercuria Energy Trading, said the phase of venture-like funding and “quick flips” by shale producers has drawn to a close. The future will be about staying profitable while also growing production. For smaller producers who are overly leveraged with debt, this change in the cycle could be their last.

Falik said companies in such a position have two options: “One, spend enough money now to have that escape velocity to get to a point where they have that free cash flow generation; or two, they’re really just trying to do anything they can to keep their company alive, to extend the runway, and mostly, pray for higher [oil] prices.”

Can Technology Save The Day?

Many experts believe today’s tool set only allows for frac hit events to be mitigated, not prevented. But this has done little to dissuade the industry’s technology developers that are introducing new and different ways to deal with the issue.

This has reignited an age-old question in the oil and gas industry: Can technology overcome the constraints of the reservoir?

Expressing the contrarian argument, Papa said that outside of wider spacing for wells there are few levers for the shale business to pull. While noting that the industry will not relent in its drive to solve the problem, he does not see operators being able to get around rock quality and frac hits. “I would submit to you that those factors are going to likely outweigh technology improvements over time,” he said.

Greg Powers, vice president of innovation at Halliburton, also sat on the panel and expressed confidence that technology will make a difference in the parent-child issue. “It think it’s being solved slowly but surely by trial and error,” he said.

As a leading technologist at the world’s second-largest service company, Powers admitted that he has to be an optimist on this topic. At the same time, he acknowledged the daunting scope of the challenge, adding that while trial and error is helping it has yet to deliver the answer on what to do.

“You want to get (fractures) as close as you can without any communication, and that’s a very tricky area right now,” said Powers. He said hydraulic fracturing operations cannot be optimized much further without a deeper understanding of the formations and rock dynamics. Combined with the right diagnostics, ones that can work in-situ and at scale, it is plausible that some degree of fracturing control could be achieved.

Two technologies that he said can aid the cause are fiber optics and tracers, but neither are likely to become the silver-bullet solution. The problem with fiber optics sensing is its expense, which limits its deployment potential. Tracers are less expensive but are generally most useful in assessing production results in the weeks and months after a fracturing fleet has left the pad site.