Chevron announced Friday that it will acquire Anadarko for $33 billion in a cash-and-stock transaction with an enterprise value of $50 billion. The acquisition, which is expected to close in the second half of this year, will catapult Chevron from the fourth-largest-producing major to the second largest and place it in the ranks of the ultra-majors, according to consultancy Wood Mackenzie.

“This transaction builds strength on strength for Chevron,” said Chevron Chairman and CEO Michael Wirth. “The combination of Anadarko’s premier, high-quality assets with our advantaged portfolio strengthens our leading position in the Permian, builds on our deepwater Gulf of Mexico capabilities, and will grow our LNG business. It creates attractive growth opportunities in areas that play to Chevron’s operational strengths and underscores our commitment to short-cycle, higher-return investments.”

“The strategic combination of Chevron and Anadarko will form a stronger and better company with world-class assets, people, and opportunities,” said Anadarko Chairman and CEO Al Walker. “I …believe Chevron’s strategy, scale, and operational capabilities will further accelerate the value of Anadarko’s assets.” As of year-end 2018, Anadarko had 1.47 BOE of proved reserves, making it one of the world’s largest independent exploration and production companies.

The company will continue be led by Wirth as chairman and CEO, and will remain headquartered in San Ramon, California. 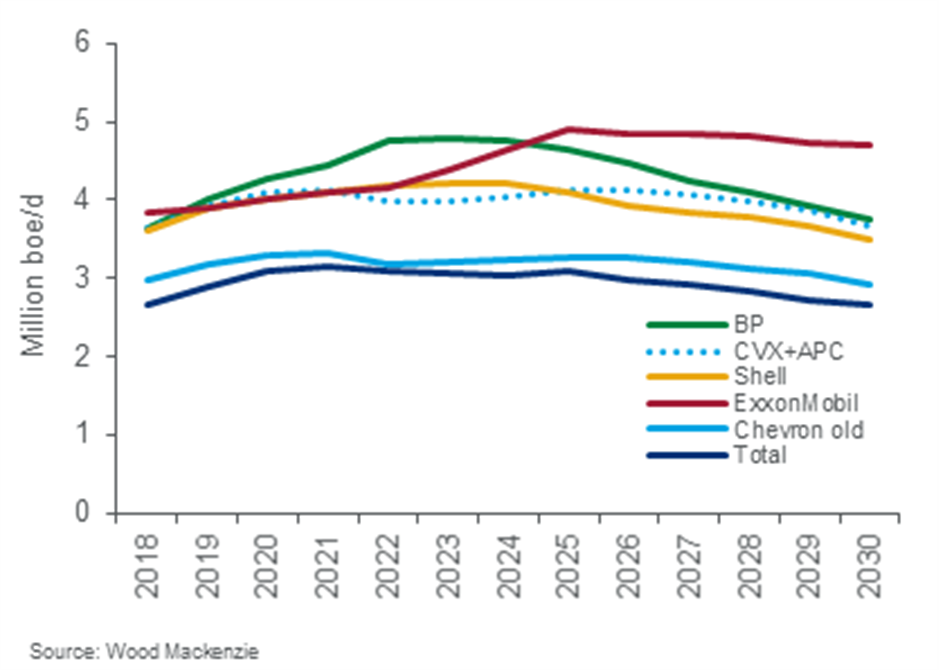 According to Wood Mackenzie, the Chevron purchase of Anadarko is the biggest upstream deal since Shell and BG in 2015. “Chevron now joins the ranks of the ultra-majors, and the big three becomes the big four,” said Roy Martin, the firm’s senior analyst, corporate analysis. “ExxonMobil, Chevron, Shell, and BP are now in a league of their own.”

“The deal will also see Chevron assert itself even more as the leader in low-royalty assets in the US Lower 48,” said Lower 48 research director Robert Clarke. “Chevron should truly outperform on cash flow and payback metrics for tight oil.”

“This acquisition represents a golden opportunity for Chevron to achieve a more leveraged capital structure that is better suited for the lower risk energy projects of the future,” said Jarand Rystad, Rystad Energy founder and chief executive. “Energy giants recognize that they need to invest more in the shale sector and in renewable energy. At the same time, due also to the lower cost of capital prevalent today, it makes sense for modern E&P companies to favor higher leverage and lower equity share, and instead use debt capital to fund investments and operations, while enhancing shareholder value through share buybacks and higher dividends.”

According to Chevron, the Anadarko acquisition will significantly enhance Chevron’s already-advantaged upstream portfolio and further strengthen its leading positions in large shale, deepwater, and natural gas resource basins. Additionally, Western Midstream Partners, of which Chevron will now take a 55% stake, will strengthen the company’s position by building its presence in what Wood Mackenzie refers to as the “midstream rush,’” from which it says Chevron has been noticeably absent.

According to Chevron, Anadarko’s assets will enhance its portfolio across a diverse set of asset classes, including the following.

Additional substantial benefits should accrue from the following, according to Chevron:

The transaction has been approved by the boards of directors of both companies and is expected to close in the second half of this year. The acquisition is subject to Anadarko shareholder approval. It is also subject to regulatory approvals and other customary closing conditions.