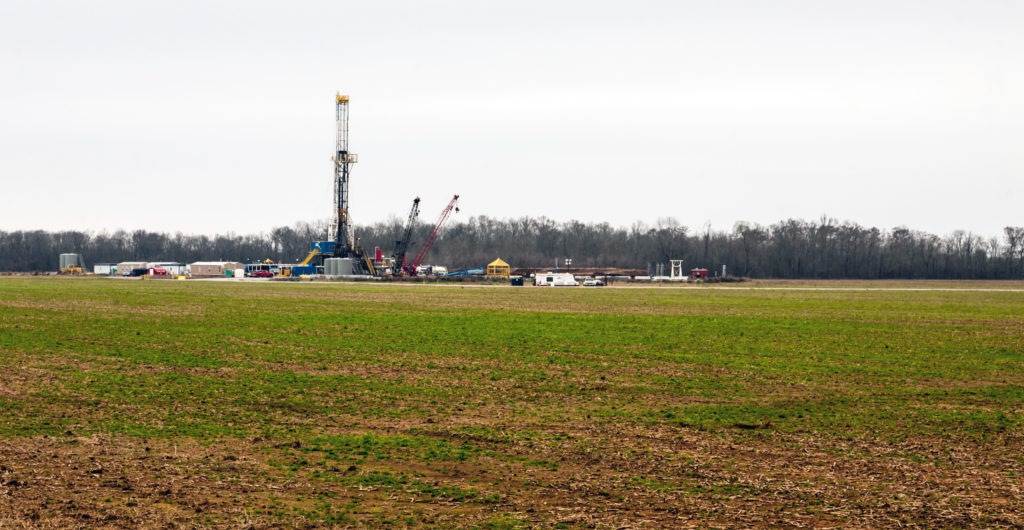 The Haynesville Shale might be the greatest comeback story of the US shale revolution.

At one point in 2016, there were just 13 active rigs in the dry-gas play that stretches between Louisiana and Texas. That figure has increased fourfold to today and, in April, the Haynesville set a new production record of 10.5 Bcf/D— the strongest output since 2011, per the US Department of Energy (DOE).

The resurgence has been led not by the large operators who initially put the Haynesville on the map, but by a group of private equity-backed operators that entered the play within the last few years. Their momentum has been driven by liquefied natural gas (LNG) facilities that began exporting the product from the US Gulf Coast in 2016.

Petroleum engineers have also moved the needle by creating a class of horizontal wells that look nothing like what the region has seen before in terms of productivity.

“I think that over the past 3 or 4 years, the understanding of optimal frac design and the selection of the targets has evolved quite dramatically,” said Artem Abramov, the head of shale research for Rystad Energy in Oslo.

The nearly 300 wells that were brought online in the Haynesville during 2017 have produced a cumulative average of 3.6 Bcf. They continue to generate an average of 8.5 MMcf/D, according to public data compiled by ShaleProfile.

This is a marked improvement over 2015 vintage wells that managed only 1.5 MMcf/D after reaching the same cumulative production point. In terms of long-tail production, this is an increase of more than 450%.

One of the most critical factors behind the improved recovery is the increased use of proppant in horizontal wells. Thanks to lower prices made possible by the in-basin mine trend taking hold across the US shale sector, operators can afford to place two or three times the amount of sand into Haynesville’s tight-rock system than they were prior to 2016.

Abramov remarked that this development has effectively “re-established it as a completely new play.” 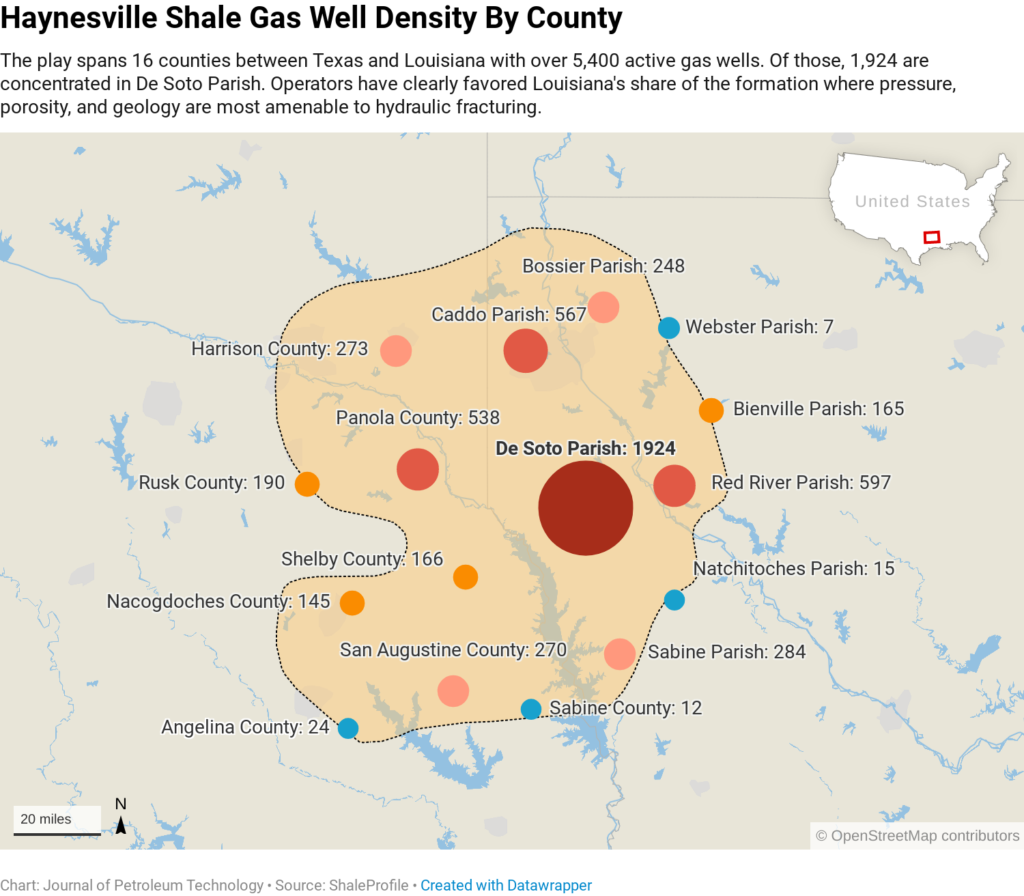 Too Much of a Good Thing

Rig counts have remained steady at around an average of 55 since the start of the year but the region is seeing more completion activity and has become one of the fastest-growing demand centers for hydraulic fracturing crews in the US. As the race to reawaken the sleeping giant continues on, there are concerns that too much production could harm the play’s economic standing.

Calgary-based RS Energy Group (RSEG) recently looked at the issue and found that takeaway capacity may hit a wall as early as this summer, possibly curtailing drilling plans for the rest of the year.

“It’s not a Haynesville constraint in isolation,” explained Trevor Sloan, an executive director and co-head of research at RSEG. “Rather, Haynesville producers share common routes to coastal demand centers—including LNG facilities—with northeast producers, and the midcontinent for that matter. Potential from all those basins could cause some congestion on routes south.”

RSEG does not forecast a severe oversupply, but points out that a majority of Haynesville sales gas, which faced a typical discount of $0.10 per million BTU, could see that expand to $0.50 by year’s end.

Even though new LNG trains are expected to be completed in the next year and raise the ceiling on demand, Rystad sees the same short-term risk facing the region. “The incremental capacity to absorb all of this gas is not sufficient,” said Abramov, adding that this will make 2020 margins “very tight.”

Between 2009 and 2012, the Haynesville was labeled as the highest-producing tight-gas play in the US. But the good times came to an end as the play became a casualty of surging US gas production, which sent prices tumbling. The Haynesville’s relatively deep horizons (10,000-13,000 ft) also worked against its economics.

As a result, many of the original operators in the area divested and turned their attention to the oil-rich shale plays in Texas and elsewhere.

When 2011 began, the rig count in the Haynesville peaked at just over 170 and by November production would also peak at 10.4 Bcf/D—the previous record. From 2012 onward, the Appalachian gas region that includes the Marcellus and Utica shales would reign as the nation’s top gas producer.

While activity did not grind to a complete halt, by the time the global downturn hit the industry in 2014, the Haynesville would enter into a comparative state of suspended animation. Over the next year, Henry Hub gas prices fell to $2.61 per million BTU—the lowest annual average since 1999, according to the DOE.

As bad as it seemed, this cooling off period proved to be pivotal for the big rebound.

In the summer of 2014, Shell sold off all of its Haynesville assets to private equity-backed Vine Oil & Gas. A year later, Encana—the company that drilled the play’s first exploratory well in 2006—sold its entire stake to a newly formed operator, GEP Haynesville, for $850 million.

Then in 2016, Chesapeake unloaded separate tranches of land for a combined price of more than $1 billion to two other private equity-backed firms, Indigo Minerals and Covey Park Energy. That same year, Aethon Energy—another private operator—entered the Haynesville through its own acquisition. One more critical development took place in 2016: the first cargo of US-produced LNG was exported from Louisiana.

These newcomers now represent five of the top six gas producers in the Haynesville. Compared with the legacy producers, Sloan said these private equity firms are “very much holding their own, in terms of both well performance and economics.”

Outside of the LNG export driver, a few other factors had to align to get the Haynesville where it is now. The top of the list looks like this: longer wells, adoption of slickwater fluids for fracturing, and higher-proppant intensities.

ShaleProfile data shows that in 2013, average well lengths were about 5,250 ft compared with almost 7,500 ft in 2018. The next step operators took was to inject more fluids and proppant into the Haynesville. The average proppant loading 6 years ago was about 7.2 million lb per well. Last year, the average was nearly 25 million lb—a roughly 250% increase.

Reflecting a sector-wide trend, Haynesville producers have moved away from crosslink gels and are using more slickwater fluids with concentrated friction reducer to move these heavy loads. The added sand has propelled well productivity to new heights and appears to have helped cure one of the play’s historical problems: fracture closure caused by the formation’s high clay content.

Haynesville operators can afford the new prescriptions thanks to the advent of in-basin mines that compete with traditional supplies coming from the US Midwest. The local sources remove much of the cost required to transport the sand, allowing operators to double or triple the tonnage that is sent down each well without drastically altering well economics.