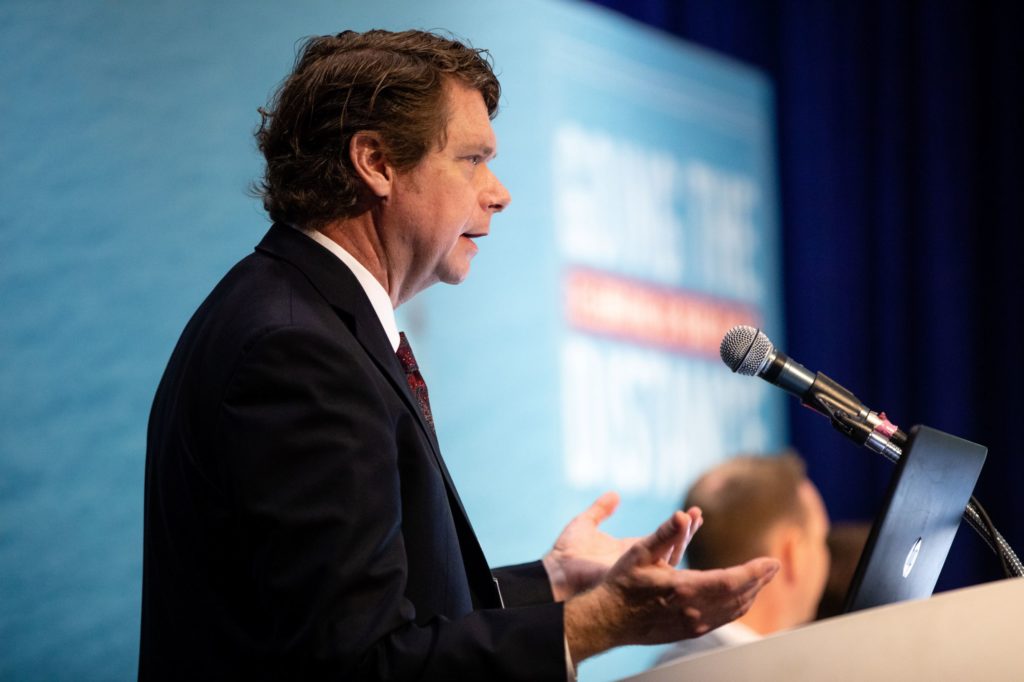 Anthony Beebe, senior vice president of project management and engineering at Northern Offshore, describes to conference attendees what it takes to keep a drilling rig from turning to the right. Source: OTC.

It turns out that owning an out-of-work drilling rig is actually a lot of work.

A pair of presentations from offshore rig contractors shared at this week’s Offshore Technology Conference (OTC) in Houston offered an unvarnished look at the pains involved. The discussion was a reminder that though the offshore drilling market is making a comeback after years of sluggish activity, the wounds have not fully healed.

This is especially true for companies that have found themselves taking on brand new assets in what is still an oversupplied market.

One of those firms is Houston-based Northern Offshore, whose rig fleet mostly consists of shallow-water  jackups that are currently stacked in Chinese shipyards. As the company continues to build new ones, it faces a risk of bringing them into this world without a contract. Such was the fate for a newbuild that has sat idle for the past 16 months.

“Stacking a rig after delivery is terrible—no one ever wants to do that,” said Anthony Beebe, the senior vice president of project management and engineering at Northern Offshore. Speaking from experience, he said worse yet is that, “Nobody wants to hire a stacked rig, there’s never enough money budgeted, you’re always stacked too long.”

Beebe’s presentation included a recent industry survey that showed that 86% of oil companies prefer not to hire a stacked rig after it has sat idle for a year. “That’s the most depressing slide in the whole deck,” he quipped.

But there are ways to become competitive in a saturated market. As painful as it is for the rig contractor, it requires spending millions of dollars more on the laid up asset. “Every penny spent is worthwhile,” advised Beebe.

Dubai-based Borr Drilling formed just 2 years ago as a pure-play jack-up contractor and has faced many of the same issues as its rival. The big difference between the two is that by virtue of being a new firm, Borr Drilling has had less experience in the tedious process of keeping idle rigs in a state of readiness in case a contract does come through.

“If there’s one key takeaway, it’s that it takes longer than we all think,” said Doug McEwan, the director of new builds and reactivations at Borr Drilling.

He noted that the company currently has 16 new jackups sitting idle in Singapore, with just 3 reactivations in the last 6 months. To deal with this glum reality, leadership's goal is to be “happy stackers” and not cut corners on the rig preservation process.

When a contract does finally come, the reactivation period for Borr Drilling is hoped to only take 90 days. Its fastest turnaround was 45 days, an experience McEwan described as “a real struggle.” Northern Offshore takes a slower approach and promises operators rig deliver in 6 months to account for long supply chains. 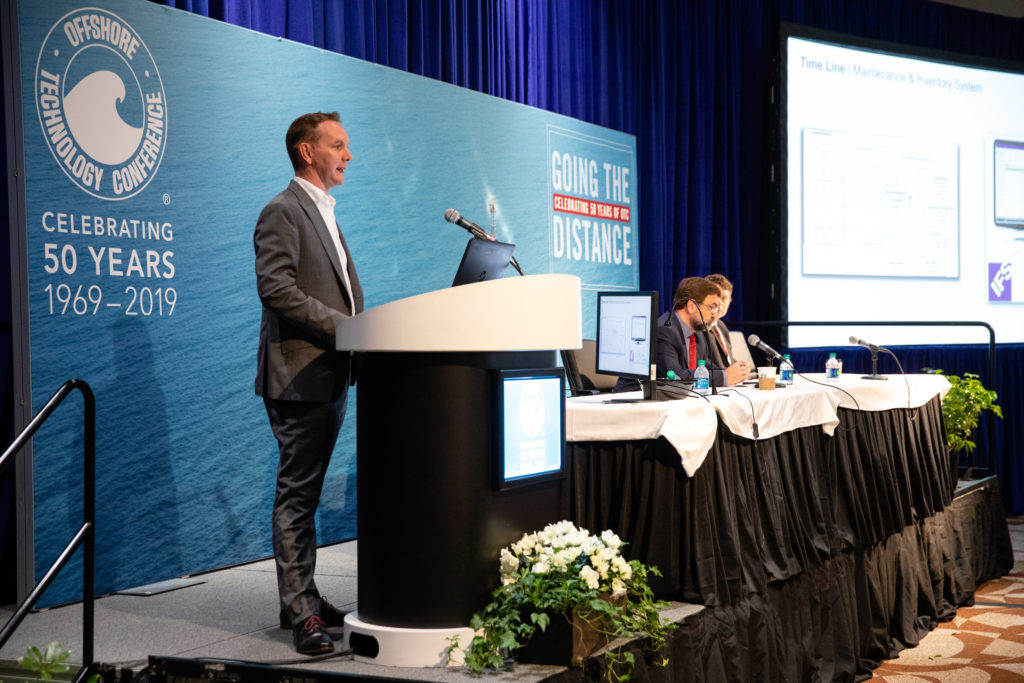 Doug McEwan of Borr Drilling relates how communication is as important as good maintenance procedures when it comes to bringing an idle rig back to lift. Source: OTC.

But for a rig to be reactivated, it must first be prepared with meticulous and costly attention to detail.

On a newbuild, the process of getting ready to do nothing months on end begins with a drilling systems test. If the topdrive works as it should, a loan is then taken out to buy the rig. The rig contractor then must hire a crew of up to 20 people to help bring onboard several million dollars of tools and spare parts.

After all that, the real work to preserve the brand new asset is launched. Beebe said “priority number one” is to protect the rig’s electrical systems. His advice is to start with installing dehumidifiers and heaters while ensuring there is good ventilation. “Then add more dehumidifiers,” he said, highlighting that his company has used more than 1 metric ton of desiccant bags to keep every room and cabin in its rig fleet dry.

Both companies also rely heavily on companies such as NOV and Cameron who make the mission-critical mud pumps and blowout preventers. These companies are hired to help strip down, grease up, and then wrap in plastic the equipment they have just sold to the rig contractors. If done right, Beebe said you can open the bags months later and see the components are “in fabulous shape.”

When this process runs smoothly, weekly maintenance reports should also be scant. Sharing the most recent report issued just before the conference, Beebe said the biggest problems on one of the firm’s stacked rigs were worn out wiper blades on outboard cameras and dead radio batteries.

When rigs do not get as much attention, the problems add up quickly. Beebe showed pictures of another contractor’s stacked rig in China that forwent the preservation of drilling systems, allowing corrosion to spread unabated. Left vulnerable and exposed to climate conditions, he said key pieces of the rig are likely to fail safety tests when they finally head back out to sea.

McEwan said the one guarantee rig contractors have here is that “no matter how vigilantly you maintain it, something will surprise you, and usually it’s not positive.” One example involved a component of a rig’s draw works that had severe rust and needed replacing. When the issue was discovered, the company looked at the six other jackups it owns with the same design and found the same component was rusted out on all of them.

Other challenges have nothing to do with rusted out iron. McEwan related that early on, Borr Drilling “wholly underestimated” how much time its crews needed to get the rigs prepared to go back to work.

In some cases, the confusion over roles and responsibilities meant certain tasks did not get done on schedule. “There was a lot of finger pointing,” as a result, McEwan said.

The solution, he emphasized more than once during his remarks, was to improve the company’s lines of communication. This goes for the operations team within the company, and all the external engagements with vendors.

Another learning moment here came when an email server was not installed before the crew assembled on a rig about to undergo reactivation. A complete breakdown ensued.

“It was amazing how, as a group and collection of individuals, we couldn’t communicate,” McEwan said, adding that the company has since decided to get email servers onboard “as quick as possible.”