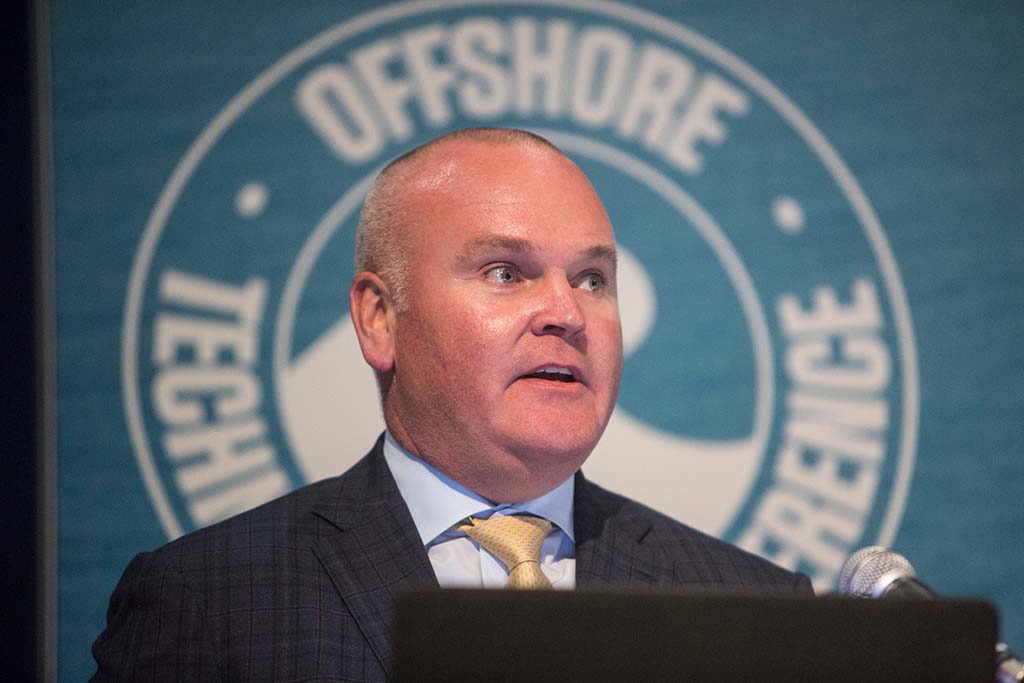 Transocean Chief Executive Officer Jeremy Thigpen offered a rare look at promising new technology that is being tested by the biggest offshore drilling company during a speech at the Offshore Technology Conference. Source: OTC.

Transocean this week revealed a number of projects it is working on for its rig of the not-so-distant future.

The promising technologies range from a shearing ram able to cut tough components, such as connectors, powered by solid propellant the same as airbags and rockets, to a hybrid power unit that stores the power generated by dynamic positioning systems, like a hybrid car.

Jeremy Thigpen, president and chief executive officer for Transocean, offered a list of new technologies that have survived through the development stage to have at least a reasonable chance of becoming tools for offshore drilling.

A common positive for the company is “there is real customer interest, which is often the case when it is new,” Thigpen said.

The new shearing device created by a startup called Kinetic Pressure Control weighs less and has far fewer parts than traditional hydraulically powered shearing devices. By using an electrically activated propellant, it can eliminate hydraulic lines running to the topsides and the heavy rows of large actuator bottles on the BOP stack to provide a surge of power in an emergency.

“This is a blowout stopper, not just a preventer,” Thigpen said, adding that the device can easily be incorporated in existing BOP stacks.

A hybrid system has been installed on the dynamic positioning system is being tested off Norway on the Transocean Spitsbergen, which is under contract for Equinor.

“It provides “a battery reserve on each thruster to better manage power more efficiently and reliably,” Thigpen said. In addition to reducing the load on the engine and reducing fuel consumption, the batteries could offer backup power in an emergency. Lower fuel use reduces the cost of carbon emissions, which can be a significant cost in Norway.

One of the biggest, and most likely to be used, innovation is a drillship equipped to drill into high-pressure, high-temperature reservoirs. A 5-year contract with Chevron, announced late last year, will give $830 million to Transocean to equip a drillship that can handle drilling in wells with pressures up to 20,000 psi.

Blowout preventers have been ordered for the vessel, which is being modified now to drill HP/HT wells. The plan is to have it completed in 2021, said Roddie Mackenzie, senior vice president of marketing, innovation, and industry relations for Transocean.

A second project with Equinor is testing a system providing early warnings of kicks. It does so using software that precisely measures fluid flowing into the riser using pressure sensors on top of the other data gathered to measure well conditions.

“It detects kicks and losses much sooner,” allowing drillers to identify and react using conventional methods to small inflows of fluid from the formation before they become bigger problems, said Per Christian Stenshorne, product line vice president for enhanced drilling.

“It is less invasive than MPD (managed-pressure drilling),” Thigpen said. While the company does have five rigs equipped to handle MPD, it says this system offers an advantage. “You can use it immediately on your rig,” he said.

Transocean has also been testing a system that uses a large volume of data from downhole sensors that is delivered to the surface using wired drilling pipe to provide a more detailed, accurate view of what is going on at the drill bit to manage drilling settings, such as the weight on bit.

“In some wells, it allows 30% faster drilling,” Thigpen said, adding, “It is an outstanding technology. A technology a customer would be willing to pay for.”

All of the systems provided some element of safety improvement by increasing the reliability of critical systems. Its Halo Guard includes sensors on rig equipment that will first trigger a warning on a small device worn by rig workers and, if the warning continues, the system shuts down the machine.

This paper explores the nature of the vibrational dysfunction known as BHA chatter. A field-proven frequency-domain model illustrates the cause of the dysfunction, its rotary-speed dependence, and mitigation methods and results.