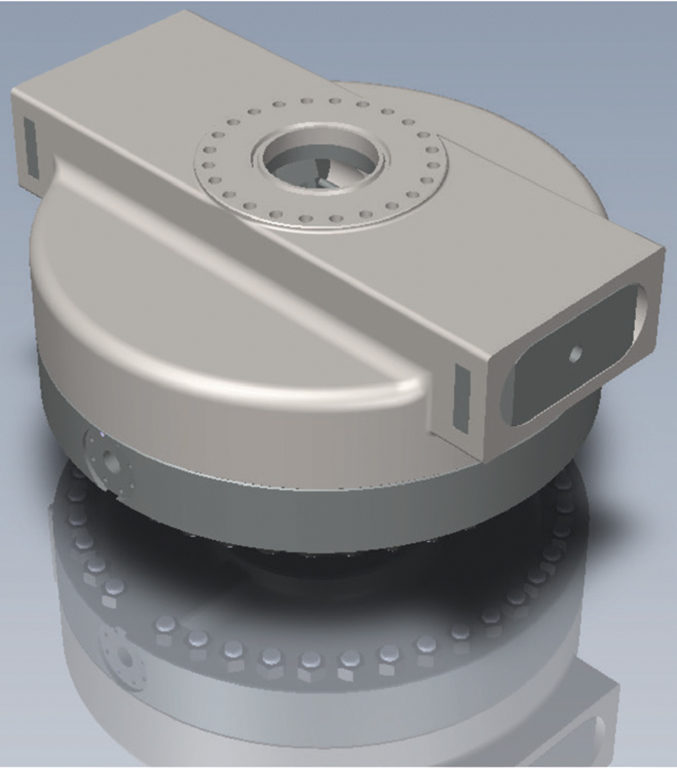 Photo courtesy of BOP Technologies.
The new blowout preventer design does not have arms extending from its body, normally a standard feature for these well control devices.

BOP Technologies has designed a blowout preventer (BOP) that it says is simpler, more efficient, and, most importantly, can deliver enough power to shear anything that goes into a well.

After 3 years of work, the small Houston company is showing off models and pictures of a new compact, cylindrical design that it says can drive a shearing ram with 5 million pounds of force—more than 60% greater than what is now available—and that will be able to cut through drill collars that cannot be cut by currently available BOPs.

“It delivers the power. That is where they come up short,” said Jay Read, the inventor of the device and founder of BOP Technologies.

The big problem now facing BOP Technologies is “we have got to prove it,” Read said. The company needs to raise millions of dollars to build a BOP big enough to show what it can do to actual steel tubing. But based on his long experience building BOPs for the biggest makers in the industry, he said he is looking forward to it, adding, “I can’t wait.”

While BOP Technologies is talking about its ideas as it seeks backers, Shell and Transocean have quietly been working over the past 3 years on a new-generation BOP control system, said Jose Gutierrez, director, technology and innovation for Transocean.

“This is an opportunity to attack the status quo,” said Gutierrez, adding that the control systems available now are unreliable, resulting in much lost time during drilling. “It removes value from the system,” he said.

The process used by Shell and Transocean relies on methods regularly employed by industries such as aerospace to develop reliability-centered designs, which allow systems to continue working even when parts fail, Gutierrez said, but said he could not provide further details.

In the wake of the blowout of the Macondo field in 2010, which destroyed Transocean’s Deepwater Horizon rig, regulators have focused on reliability and pushed for a BOP able to shear whatever was inside it.

While that remains a goal of the US Bureau of Safety and Environmental Enforcement (BSEE), which is tracking efforts like BOP Technologies, the offshore regulator has not set a deadline to reach that goal. In BSEE’s recently released well control rule, it calls for BOP stacks with two shear rams to ensure that if one cannot sever what is inside, the other will be able to do so.

In the rule-writing process, a time limit was considered for development of a BOP that can sever anything, but it is not in the final rule because such equipment “probably doesn’t exist” now, though BSEE is still seeking a practical way to reach that goal, said Doug ­Morris, chief for the office of offshore regulatory programs for BSEE.

Adding to the difficulty for equipment makers is a market where demand for well control equipment has disappeared with the deep slump in offshore exploration and production.

While Gutierrez acknowledged that in this market, “you see blood on the floor,” he is hopeful because there is also “more focus on inventiveness, efficiency, and cost.”

Mark Alley, chief executive officer of BOP Technologies, said “there is serious interest in” his BOP design but he has yet to secure project financing.

The thinking behind the BOP Technologies design began after Read left Cameron and was working at a small think tank considering inventive oilfield ideas. He said that being away from an established BOP maker for the first time in his career freed him from the limits that come with designing products for a company with a successful product where fundamentally changing things has significant consequences.

The round shape of the intensifier assembly is reflected in the BOP brand name, Cirbop, which was based on the description: circular intensifier ram blowout preventer. When the BOP is fired, that pressure can be used to drive the rams, applying millions of pounds of force without arms the size of oil drums.

This approach requires a hydraulic supply line operating at 4,000 psi, compared with 7,500 psi for other high-capacity deepwater BOPs, reducing the pressure on the line as well as the pressurized fluid stored in accumulator bottles at the wellsite. It also has about a third fewer parts than a conventional design.

Another difference in the design is the lack of nuts and bolts in sight. This makes it easier to service, Read said, and those connectors are not exposed to salt water.

The case for doing something different is persuasive until one considers the obstacles facing a tiny startup competing with the biggest oilfield service companies at a time when the business is in a deep slump. But Read is optimistic, saying, “I have no doubt in my mind that this will eventually be used. When it will is a big question.”