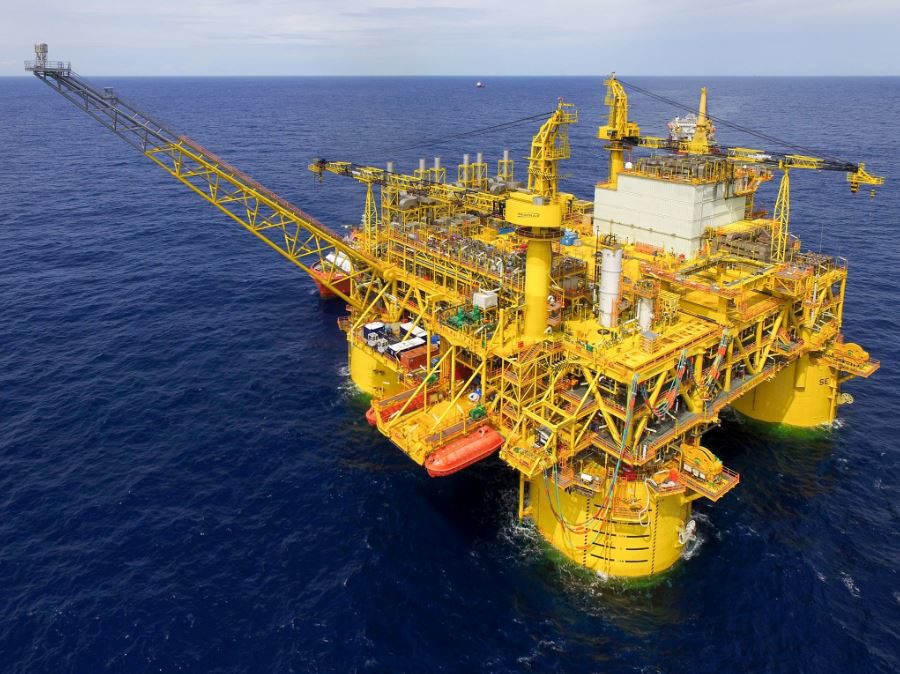 Relatively small fluid samples can drive the design of big facilities such as the Malikai platform offshore Malaysia. Source: Shell.

Wireline formation tests represent an oil and gas company’s first real taste of the reservoir’s prize, but they have a history of capturing nonrepresentative samples. For a solution, Shell is turning to a new software developer called Senslytics to see if it can make wireline formation testing more accurate and predictable.

These tests involve sending a probe downhole to contact the exposed rock along the wellbore, then pumping reservoir fluids into the device to analyze their chemical composition. “The problem with this process is that when you’re engaged at such distance down below, you don’t know how long to sit there,” said Rabi Chakraborty, president of Senslytics.

Founded in 2015 and based near Atlanta, Georgia, Senslytics will try to prove that its software can figure out the right time to pull the test system out of a newly drilled well. To help reach that goal, the firm will receive an undisclosed sum of seed funding from Shell as a part of being selected by its GameChanger program, which was set up in the 1990s to work with startups developing “transformative technologies.”

The deal marks a major milestone for Senslytics, which was voted last year by industry investors and innovation experts one of the 10 “most promising” startups in the oil and gas business at the Offshore Technology Conference in Houston.

Getting a Clean Sample, Faster

Considered an essential test for high-value wells, the results of a formation test are used by engineers to estimate a long list of important reservoir parameters: pore pressure, permeability, stress, and the quality of oil. In the offshore arena, these measurements move up the food chain to influence billion-dollar decisions on how much a well will produce, which in turn is used to decide how big of a production platform to build.

But because formation tests are run under some degree of uncertainty, even when using real-time telemetry, the risk operators face is two-fold: if the tests end too soon, they will bring up a sample contaminated with drilling fluids; if the tests take too long to get a clean sample, then they can also waste money, which in the case for a deepwater test can be on the order of a million dollars per hour.

The challenge is to pump enough fluids through the testing system so that drilling fluids (i.e., oil-based or water-based muds) are flushed out. Ideally, the only fluid that remains in the system comes straight from the reservoir rocks.

Chakraborty said that traditional analysis involves more than three dozen different variables, which makes it a difficult process to predict. “Normal machine learning cannot do that,” he said.

To overcome the complexity, and find the earliest relevant signals in the data, Senslytics' “intuition platform” incorporates contextual, situational information from sensors and other systems relevant to the operation of the wireline test but not always used to monitor a test’s progress. “We are putting the search light in the places that will give you the forewarning,” added Chakraborty.

Senslytics' own test of its approach will involve an upcoming drilling project with Shell where the software will be run in shadow mode during a formation test to see if it can improve the operator’s benchmarks.