Despite weakening growth in GDP and strengthening energy prices in 2018, global energy demand last year rose at its fastest pace since 2010, according to BP’s 2019 Statistical Review of World Energy. China, India, and the US were responsible for two-thirds of the 2.9% increase in consumption, BP Group Chief Economist Spencer Dale said in releasing the report. The widely followed annual statistical review said that demand growth pervaded all fuels, most of which grew more strongly than their historical averages.

Both consumption and production of natural gas grew more than 5%—one of its strongest growth rates in more than 30 years—making up almost 45% of the entire growth in global energy consumption. 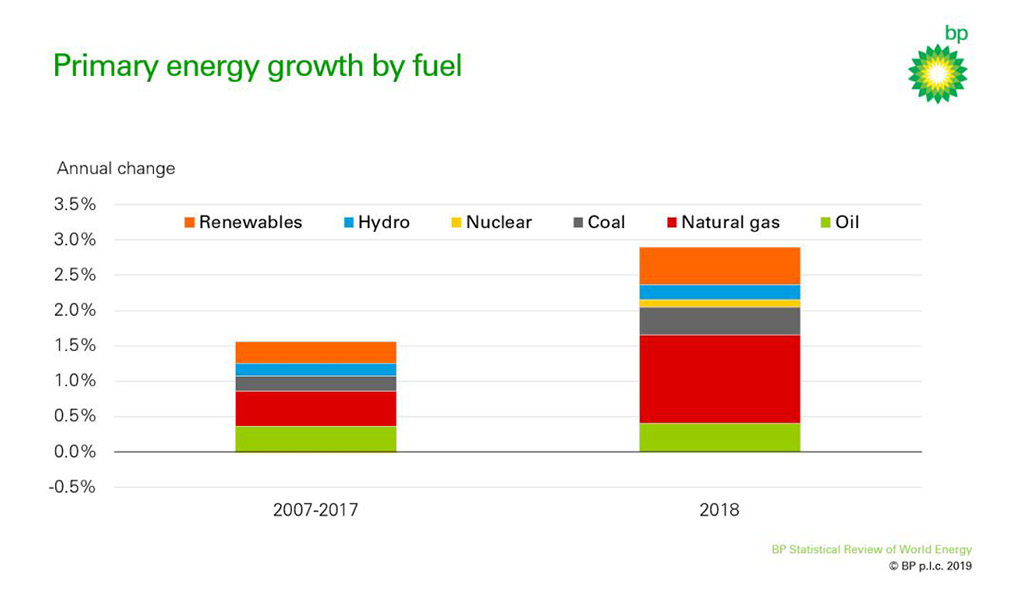 The US accounted for almost 40% of global natural gas demand growth and over 45% of the increase in production. Gas output increased by 86 Bcm—almost 12%—driven by shale plays in the Marcellus, Haynesville, and Permian basins. Although some of the increase was used to feed three new US LNG trains that came on stream last year, Dale said the majority was used to quench the thirst of domestic demand. US gas consumption increased by 78 Bcm—roughly the same growth as the country achieved over the previous six years. Outside the US, gas demand was concentrated primarily across China (43 Bcm), Russia (23 Bcm), and Iran (16 Bcm), which together with the US, accounted for 80% of global growth.

Global LNG supplies continued their rapid expansion last year, increasing by almost 10% as a number of new liquefaction plants in Australia, the US, and Russia were started or ramped up. For much of the year, Asian demand for gas was sufficient to absorb the increasing supplies. But lower Asian demand toward the end of the year and a mini-surge in LNG exports drove prices down. With continued price declines during the first part of this year, rapid increases in supplies could curtail some LNG capacity going forward.

Last year was a rollercoaster for oil markets, with prices starting the year on a steady upward trend and reaching $85/bbl in October before plunging to close to $50/bbl at year end. World demand increased 1.4 million B/D, with growth dominated by the developing world. China and India accounted for almost two-thirds of the global increase. The importance of petrochemicals in driving oil demand increased, as evidenced in the global product breakdown, with products most closely related to petrochemicals (ethane, LPG, and naphtha) accounting for approximately half of the overall growth in demand.

On the supply side, global production growth of 2.2 million B/D more than doubled its historical average. The vast majority of this growth was driven by US production. OPEC production fell in 2018 by 0.3 million B/D, with a marked increase in Saudi Arabian production (0.4 million B/D) offset by falls in Venezuela and Iran.

For the full report, go to  www.bp.com/en/global/corporate/energy-economics/statistical-review-of-world-energy.html