In an all-stock deal, US service companies Keane Energy and C&J Energy Services announced that they are merging. Upon regulatory approval, the development will result in the third-largest service company based on hydraulic fracturing horsepower (HHP).

The deal will further consolidate a market segment that has been under pressure to reduce operating costs since the onset of the oil price downturn almost 5 years ago.

Ownership is to be split evenly between Keane and C&J shareholders, each holding 50% of the new stock. With unanimous approval from the board of directors of both companies, the merger is expected to be completed by the end of the year. The combined entity will be worth $1.8 billion, with an annual revenue of $4.2 billion, 66% of which will come from the pressure pumping service line.

While a new corporate name has not been shared, the newly merged company will own about 50 pressure pumping fleets, representing 2.3 million HHP. The combined outfit will also boast 158 wireline trucks, 28 coiled tubing units, 81 pump down units, 139 cementing units, and 364 workover rigs.

In terms of stimulation capacity, the new company will be behind only Schlumberger with 2.6 million HHP and Halliburton with 4.6 million HHP. Keane and C&J’s current positions in this regard are sixth and tenth, respectively.

In a presentation to investors, the two companies said they share a limited overlap of customers, which include some of the biggest names in the sector, such as BP and Chevron.

The two companies billed the deal as a “merger of equals,” and said that it will generate “cost synergies” of around $100 million in the first 12 months after closing. The cost reductions are expected to come from sales, general and administrative expenses, supply chain management, and operational efficiencies.

In January, ProPetro Holding Corporation completed its acquisition of Pioneer Natural Resources’ eight fracturing fleets for $400 million, giving it a total of 28 fleets. At the start of 2018, Schlumberger bought all of Weatherford’s pressure pumping, pump-down, and perforating assets for $430 million in cash. 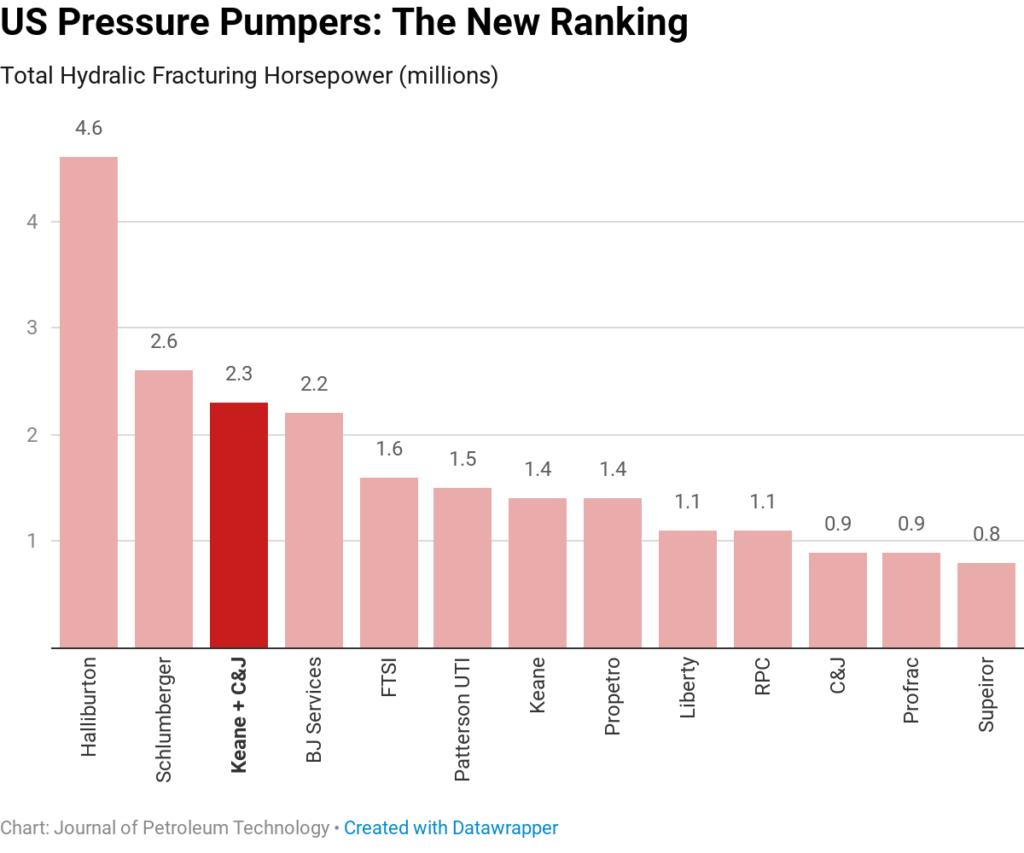