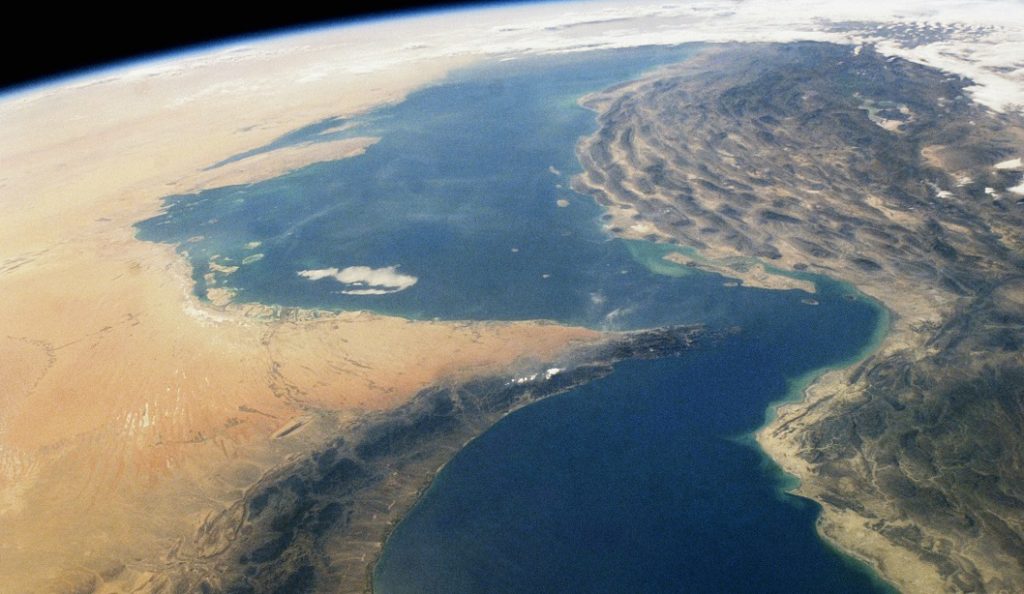 A satellite view of the Strait of Hormuz, which adjoins the Persian Gulf with the Gulf of Oman and lies between Iran and Oman. Source: Getty Images

Reports 20 June that Iran shot down a US Navy drone over the Strait of Hormuz—the global oil market’s most critical transit point—exacerbated tensions in the region following a pair of attacks on oil tankers in the Gulf of Oman just a week earlier.

The US had accused Iran of attacking the Japanese- and Norwegian-owned tankers, releasing a video showing, it says, Iran's Revolutionary Guard removing an unexploded mine from one of the vessels. The traditionally strained relationship between US and Iran became even more turbulent when US President Donald Trump last year withdrew from the 2015 Tehran nuclear deal and reimposed sanctions on the country.

Those sanctions primarily target oil exports in a move meant to cripple the country’s economy just as its oil production rebounded after the 2015 deal. Iranian output fell to 2.37 million B/D in May after averaging 3.81 million B/D in 2017, according data from the Organization of Petroleum Exporting Countries, of which Iran is a founding member. The International Monetary Fund projects Iran’s economy to shrink 6% this year.

If the attacks were indeed carried out by Iran, those actions could be perceived as a way for the country to flex its muscle where some 21 million B/D of oil, or 21% of total global petroleum liquids consumption, passed through last year, data from the US Energy Information Administration (EIA) indicate. Iran makes up the Strait of Hormuz’s entire northern coastline.

“The inability of oil to transit a major chokepoint, even temporarily, can lead to substantial supply delays and higher shipping costs, resulting in higher world energy prices,” EIA said in a daily energy update. “Although most chokepoints can be circumvented by using other routes that add significantly to transit time, some chokepoints have no practical alternatives.”

About one third of total global seaborne traded oil transited the straight in 2018. Its geographical significance is underpinned by the reality that few alternatives exist for moving crude elsewhere in a region consisting of OPEC powerhouses. Saudi Arabia and the United Arab Emirates had a combined 6.5 million B/D in available crude pipeline capacity at the end of 2018, EIA noted. Saudi Arabia, itself an adversary of Iran, moves the most oil through the Strait of Hormuz.

EIA estimates that 76% of the crude and condensate that passed through the strait went to Asian markets in 2018.

While Brent crude prices had dropped more than $12/bbl since late April, reports of the drone strike caused prices to spike on 20 June in a reminder of the oil market’s sensitivity to geopolitical confict originating in the world's largest producing region.