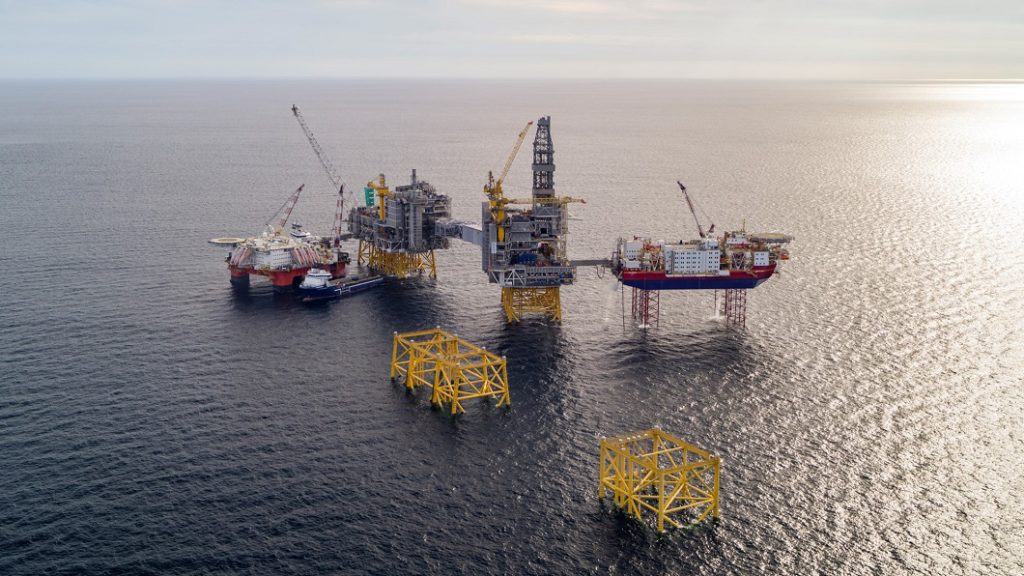 The John Sverdrup facilities in the North Sea. Source: Equinor

Equinor will capitalize a 16% shareholding in Lundin Petroleum and, in exchange, increase its interest by 2.6% in the giant Johan Sverdrup field on the Norwegian Continental Shelf (NCS) and receive $650 million in cash.

Equinor’s purchase of Johan Sverdrup interest is expected to close by the fourth quarter, just ahead of the field’s production launch, which is slated for November.

Located on the Utsira Height in the North Sea, 160 km west of Stavanger, Johan Sverdrup is one of the five largest oil fields on the NCS. Production during the project’s first phase will average 440,000 B/D, with peak production rising to 660,000 B/D. The plan for development and operation of the project’s second phase was approved in May.

Equinor became a minority shareholder in Lundin in early 2016 when it acquired a 12% interest in the company. It added another 8% interest that year as it sold its holdings in the Edvard Grieg field to Lundin.

“Since 2016 we have more than doubled the value of our investment in Lundin,” said Eldar Saetre, Equinor president and chief executive officer. “This transaction gives us the opportunity to capitalize on this value creation and at the same time increase our direct ownership in the Johan Sverdrup field.”

The deal includes a contingent payment by Equinor of up to $52 million to Lundin in 2025 if Johan Sverdrup proves to be in the upper end or above its estimated resource range of 2.2–3.2 billion BOE. The move is taking place through a total return swap agreement in which the Lundin shares will be acquired by Norwegian investment bank Sparebank1 Markets and subsequently redeemed.

“The chance to redeem the majority of Equinor’s holding in Lundin Petroleum at a discount to the market and before the pivotal startup of the Johan Sverdrup development project…was an opportunity which rarely comes along,” said Ian H. Lundin, chairman of Lundin.

Equinor separately reported last week that its 30/6-H-9-T4 exploration extension well proved a 112-m oil column as part of the Oseberg Vestflanken Phase 2 project on the NCS. Oil was proven in the Statfjord formation in the southern portion of the Alpha structure at the Oseberg field. The discovery will soon be put on stream via Oseberg’s unmanned, remote-operated H platform.