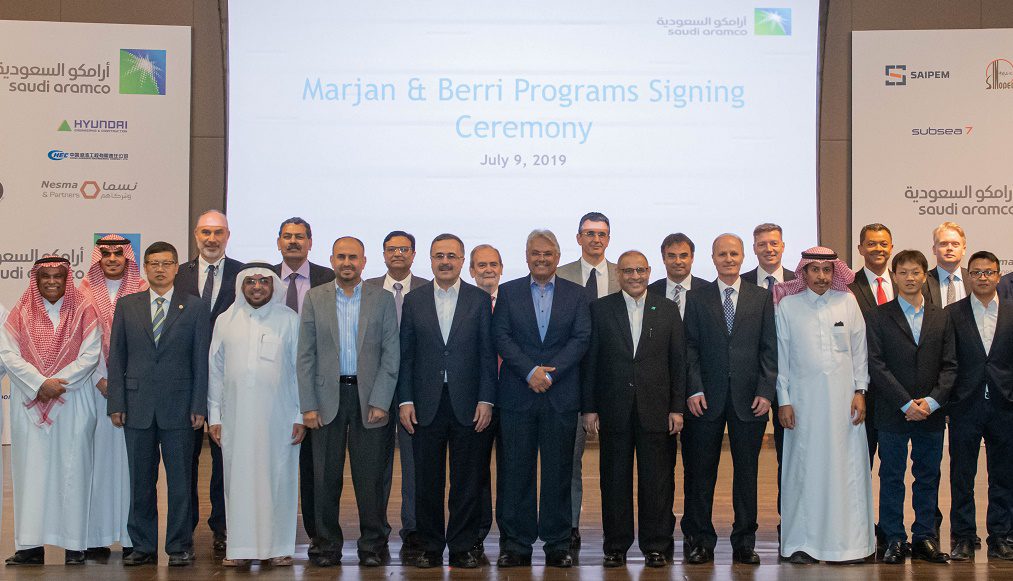 Representatives from Aramco and its Marjan and Berri contractors gathered at a signing ceremony in Dhahran. Source: Aramco

Saudi Aramco has awarded 34 contracts worth a combined $18 billion for engineering, procurement, and construction work on the Marjan and Berri fields offshore Saudi Arabia. The agreements are part of Aramco’s plans to increase production capacity of the two fields by 550,000 B/D of crude oil and 2.5 billion Bscf/D of natural gas.

Saudi-based firms took 16 of the contracts, while the rest of the contracts went to firms including Saipem, McDermott International, Subsea 7, Tecnicas Reunidas, China Petroleum & Chemical, Larsen & Toubro, and Hyundai Engineering & Construction. More than 90 entities were invited to bid on the packages.

The Marjan project will boost the field’s output by 300,000 B/D of Arabian Medium crude and 2.5 Bscf/D of gas with the construction of an offshore gas-oil separation plant and 24 offshore oil, gas, and water injection platforms.

The company plans to expand its Tanajib onshore oil facilities and build a new gas plant to include gas treatment and processing, natural gas liquids recovery and fractionation, and gas compression facilities. A cogeneration facility, water desalination facility, and transfer pipelines also will be built.

Saipem said it was awarded $3.5 billion in contracts covering the Abu Ali oil-gas separation plant for Berri field and, at Marjan field, the gas treatment plant as well as another unit for the recovery of acid gases for sulfur production.

The Marjan and Berri contractors are required to prioritize material and equipment procurement from local suppliers and manufacturers in support of Saudi Aramco’s goal to increase its locally-sourced goods and services to 70% by 2021.