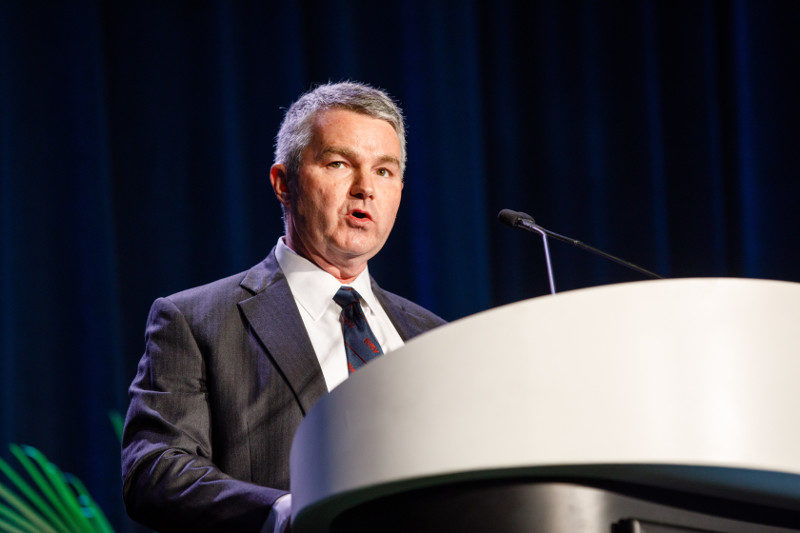 Clay Williams, chairman and CEO of NOV, speaks during the Opening Ceremony at the 2018 Offshore Technology Conference. Source: SPE

When the chief executive officer of a big oilfield service company says it is facing “challenging cross-currents as it navigates a generational oilfield downturn,” it is reasonable to worry.

The description came from Clay Williams, chairman, president, and CEO of NOV in its recent earnings report, which showed the company was navigating those rapids reasonably successfully, but painful cost cutting would be required.

That quarterly earnings report, as well as ones from Schlumberger and Halliburton, reveal the stresses of a shift away from a laser focus on onshore shale plays in North America to a global market, where much of the growth is offshore.

The outlook for the service sector is certainly more promising that when oil prices crashed in 2014, sinking all markets. But as one boom ends and other markets recover, writeoffs and layoffs for some companies continue.

NOV’s earnings discussion mentioned the cost of voluntary early retirements and severance payments related to its drive to cut annual expenses by $160 million, with half the cuts from the administrative side and the other half from operations. NOV’s quarterly earnings report also said the company would take a $5.77 billion one-time charge related to certain operations and assets whose value has been reduced by the dimming outlook in some lines of business, the majority of which are onshore US.

NOV did not offer numbers, nor did Halliburton a week before when it said it would be reducing its North American workforce by 8% as it responds to the slowdown in US fracturing by trimming its fleet.

Schlumberger made no mention of cutting jobs now, but acknowledged that, “North America land remains a challenging environment. Indeed, the E&P operator focus on cash flow has capped activity and continued efficiency improvements have also reduced the number of active rigs and frac fleets,” said Olivier Le Peuch, the Schlumberger executive who will become Schlumberger’s chief executive officer on 1 August. 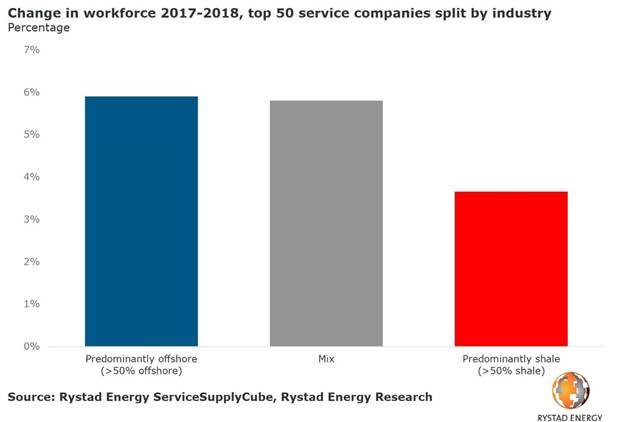 On the upside, all three of these service companies are reporting strong growth offshore and internationally.

“We expect offshore commitments to nearly double from 2018 to 2020, and sustain high levels of spending over the next five years,” said Matthew Fitzsimmons, vice president on Rystad Energy’s oilfield services team.

Offshore spending hit rock-bottom levels during the price downturn but its comeback could last.

The list of growth markets range from emerging ones, such as the Vaca Muerta shale in Argentina, to comebacks, such as the North Sea.

“Our business in the North Sea is extremely busy both in the Norwegian and UK sectors. We have significantly increased our market share there by winning large tenders,” said Jeff Miller, president and CEO of Halliburton, who added: “We're sold out of drilling and wireline tools in the North Sea.”

This transition is most beneficial for Schlumberger, which has always been stronger in global markets. As of the end of the first half of this year, Schlumberger said its international revenue was up 8% while North America land revenue had declined 12% year-over-year.

The onset of what NOV described as “severe capital austerity” in North America is not seen as a passing trend.

“The increased emphasis on capital discipline from our customer base is driving them to do more with less, and it has become clear in the second quarter that this approach is not going away anytime soon,” Williams said.

Capital discipline is infectious. NOV’s earnings conference call included a detailed explanation of how it is working to improve its return on capital invested with another round of cost cuts.

“There are literally hundreds of specific concrete steps that we have compiled that the organization will be executing over the next 18 months or so to put these in place,” Williams said.