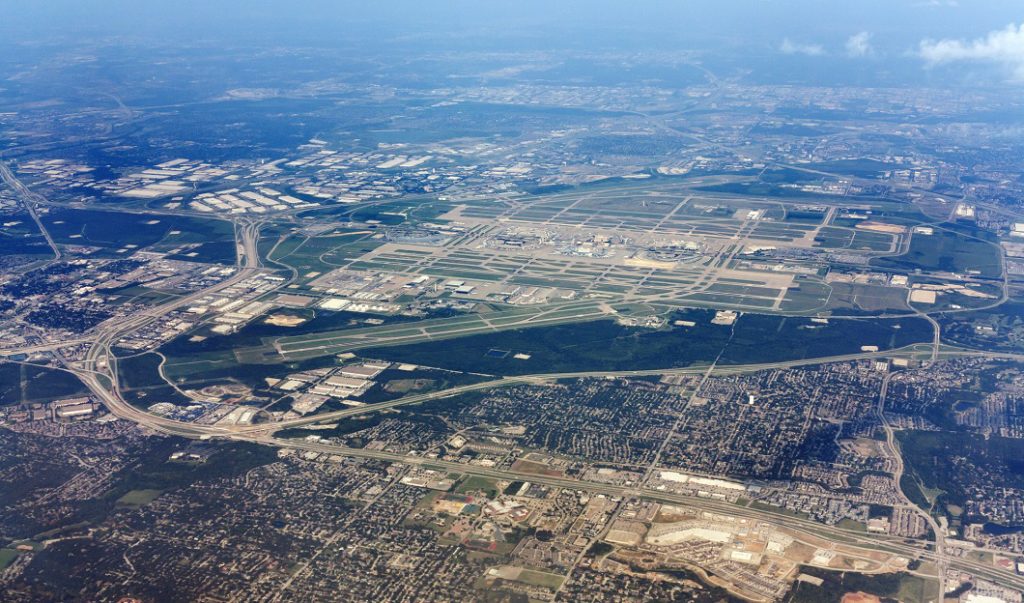 The Fort Worth Basin underlies Dallas-Fort Worth International Airport (pictured), where movement from a 22-mile fault was recorded in 2008 following activity at a nearby disposal well. The seismic events were among the first documented in the basin as wastewater disposal ramped up. Source: Getty Images

The Barnett Shale might be a play of yesteryear for the US onshore industry, but the examination of a decade’s worth of recorded activity from the birthplace of the shale revolution yields new insight on the seismic impact of wastewater injection.

Findings from researchers at the University of Texas (UT), Stanford University, and Southern Methodist University (SMU) reveal that wastewater injection in the Fort Worth Basin (FWB) of North Texas “significantly increases the likelihood for faults to slip” if not managed properly, according to a UT news release.

To improve understanding of fault sensitivity, the team mapped 251 faults totaling more than 1,800 miles in combined length in the FWB. Those faults mostly extend from the crystalline basement into the Paleozoic succession, ranging in trace length from less than two tenths of a mile to 85 miles. Each fault that hosted seismic activity, save for the 22-mile-long DFW Airport fault, is less than 5-miles long.

The researchers noted that faults in the basin were otherwise stable when left undisturbed. The FWB encompasses much of the Dallas-Fort Worth metro area.

The team subsequently built models of faults capable of causing seismic events and the stress field underlying the basin, using those models to build a probabilistic assessment of fault-slip potential, with ExxonMobil supporting development of fault-slip potential software. The goal, in part, was to help industry design mitigation strategies in developing wastewater disposal wells.

“Based on these new data, our probabilistic analysis shows that a majority of the total trace length of the mapped faults have slip potential that is equal to or higher than that of the faults that have already hosted injection-induced earthquake sequences,” the team said in their paper, which was published in July.

Industry Activity Down But Seismicity Continues

Mitchell Energy in the early 2000s pioneered commercial production of shale gas by employing hydraulic fracturing in the Barnett. The play’s rig count was 82 when Baker Hughes started publishing basin-specific rig-count data in February 2011, but, as of the week ending 26 July 2019, there was just one active rig in the play. Between 2008 and 2018, production rose from 4.4 MMcfd to a peak of 5.7 MMcfd in 2012 before declining below 3.2 MMcfd last year, according to Texas Railroad Commission data.

As the shale revolution took off, seismicity in the FWB spiked from dormant levels. Since late 2008, more than 200 seismic events ranging in magnitude from 1.6 to 4.0 have occurred in the region. Before 2008, such events almost never occurred. Like production and injection rates in the Barnett, those events peaked earlier this decade and have since fallen off.

Between 2006 and 2018, meanwhile, more than 2 billion bbl of fluids were injected into the FWB’s Ellenburger formation. Induced seismicity occurs when wastewater injected back into the ground increases the pore pressure within the rocks and affects stress along faults in surrounding rock layers.

The team referenced an expansive catalog of seismic sequences in the basin compiled by SMU researchers and published in June. Work by the SMU team, covering 2008–2018, determined that overall FWB seismicity is strongly correlated in time and space with wastewater injection activities.

While seismicity rates in the basin have decreased during the last few years, new faults have become active over time and seismicity is continuing in greater distances—more than 10 km—from injection wells, according to the SMU study. “One thing we have come to appreciate is how broadly injection in the basin has modified stress within entire basin,” Heather DeShon, SMU associate professor of geophysics and coauthor on both studies, said in a press release describing the SMU findings.

The number of seismic events in the FWB at peak still pales in comparison with the frequency seen in Oklahoma over the past decade, though seismic events have declined there as well. DeShon noted that wastewater injection volumes in Oklahoma have been much higher and faults there tend to be situated closer together.

But the methodology used in the fault study “could be used in other areas where induced seismicity is of concern but development activities are just beginning, making it possible to identify potentially problematic faults before induced seismicity occurs. So it creates a framework for making decisions in the future,” said Mark Zoback, coauthor of the fault study, Benjamin M. Page professor of geophysics at Stanford, and the director of the Stanford Natural Gas Initiative.

The team will build on its work in 2020, Zoback said, by “publishing an updated version of the fault map as well as a comprehensive model that indicates the degree of pressurization that each of the earthquake faults has experienced from wastewater disposal.”