Anadarko’s Digital Legacy Offers a Template for Others 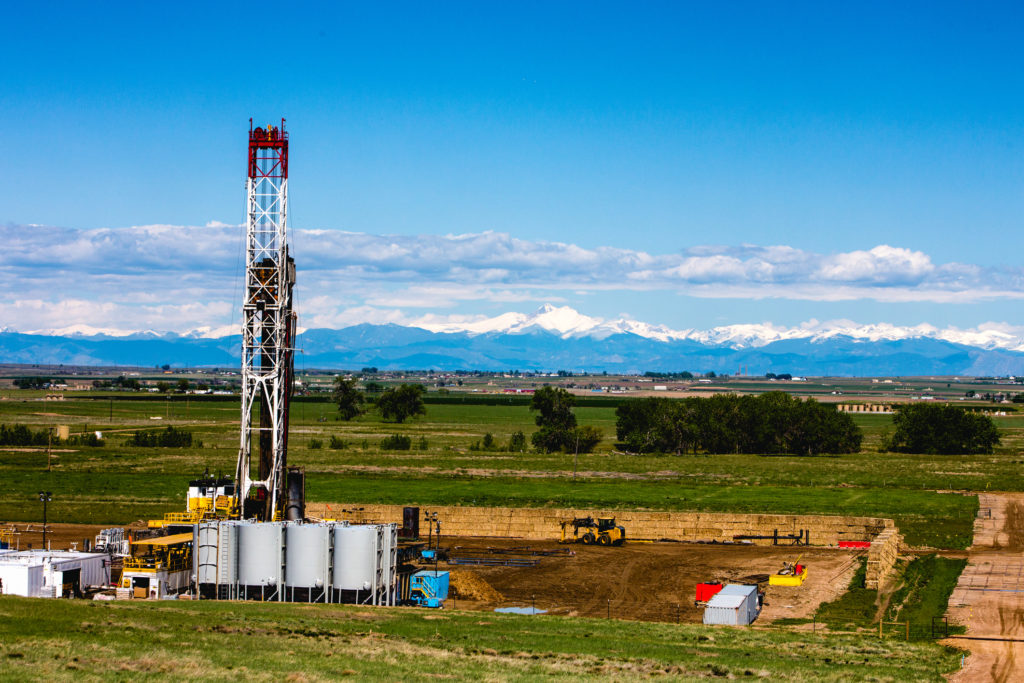 Up to the time of its takeover by Occidental Petroleum, Anadarko was known as one of the biggest cheerleaders of the industry’s so-called digital transformation that is banking on new software technologies to expand tight margins.

Last year, Anadarko opened its doors to share the story of how it put together a new 50-person team of data scientists, software developers, and petrotechnical staff to realize this vision—known as the Advanced Analytics and Emerging Technologies (AAET) group. The group’s mandate boils down to looking for new ways to solve old problems.

Oxy has not shared many details on how it will combine the two companies based in the Houston area, which means it is unclear whether its digital priorities will marry up with the work of its newest addition. And with the integration process now officially under way, Anadarko has offered this final look at what the AAET group has been able to accomplish.

“We think 80% of Anadarko’s capital program is affected in some way, shape, or form by using AAET,” said Sanjay Paranji, the company’s chief technology officer and leader of the digital group. As evidence of the scale of internal adoption, he added that 70% of the company’s petrotechnical staff use at least one of the new data analytics and aggregation platforms that the group built since it was formed in 2016.

Behind these high-level numbers is a layered strategy that Anadarko has used to solve the great “buy vs. build” challenge that all companies diving into the ever-expanding digital landscape have had to struggle with. The overriding philosophy is broken into three parts: 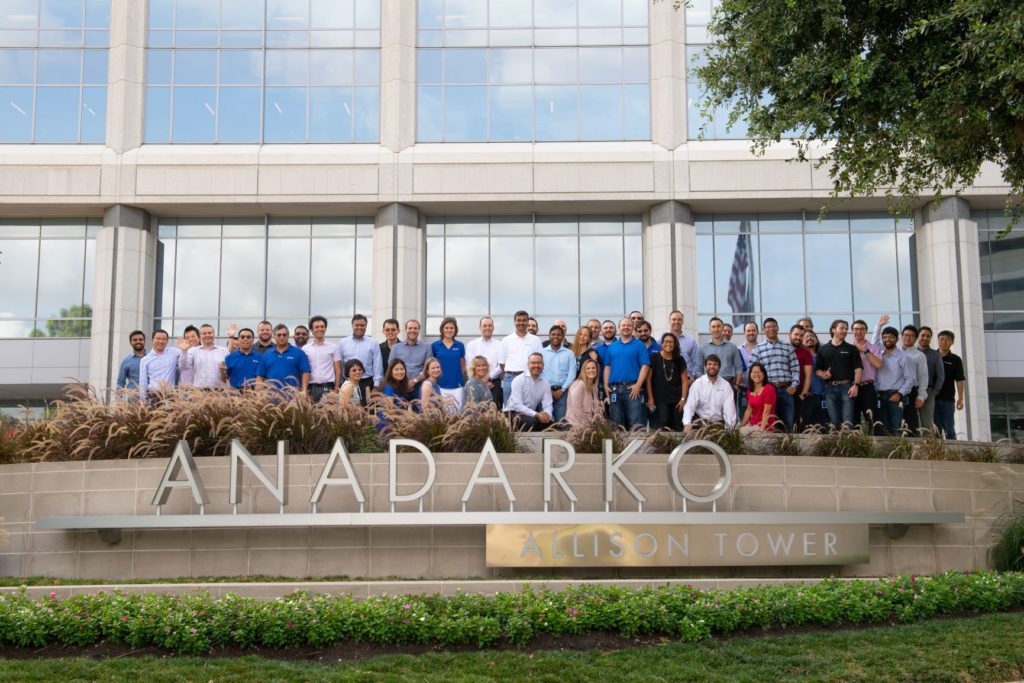 Members of the Advanced Analytics and Emerging Technologies group on their last day as Anadarko Petroleum employees. The group is now a part of Occidental Petroleum. Source: Diandra Chebul.

One of the initiatives that shows how the three planks of Anadarko’s digital strategy came together involves its goal to get a clearer picture of the subsurface. It takes interpreters months, sometimes years, to go through the massive data sets produced through seismic surveys. The company wanted to know if machine learning and artificial intelligence programs could help. They have in a big way.

The work took 2 years, but Anadarko was able to push a model out to its asset teams that can absorb seismic data and make predictions about things like the presence of faults or distinct geologic layers in a matter of a few days.

Cody Comiskey, a geo-deployment supervisor within the AAET group, emphasized that this model can be scaled globally. This means that while the model was first trained on a rich deepwater seismic data set in one specific area, it still works when ingesting data from other geologies, even in lower resolutions.

“This is comprehensive, so it covers the entire data volume,” Comiskey said of the model. He added that programs like this one are not just improving productivity, but enabling work that was simply not feasible before. “A lot of times, an interpreter will come in and focus on an area that is a prospect. To get the entire geological and structural history and context from other areas, that could take many months—and a lot of times, they just don’t have the time.”

This crunch is especially felt by the onshore asset teams where drilling cycles are far shorter than they are in the deepwater arena. The key things the shale units are looking for include faults and existing vertical wellbores—both of which could cause issues for drilling and hydraulic fracturing operations.

The effort to refine seismic data has involved outside help too. In April, Anadarko announced it was working with a startup called Bluware to develop new geophysical workflows that can be done rapidly thanks to cloud-processing.

With crowdsourcing, Anadarko said it was able to test new concepts that eventually inspired the company to develop a new way to segment faults, which goes beyond prediction and involves unearthing nuanced fault planes that reveal the true complexity of the fault regimes inside a formation. The crowd fell short of delivering the final product and instead it was the diversity of the AAET group that made the difference. The breakthrough came from an internal data scientist whose background is in aerospace engineering. Comiskey said the new methodology this person proposed came from reading an obscure journal “that would never have crossed my desk.”

The company has now produced fault maps that a team of experts would never be able to develop. And if they did, the effort would take several years. To look at the visuals side by side is to know that the subsurface is far more complex than most interpretations reveal. The advantage of the newfound granularity is a much better idea of how hydrocarbons can migrate within a reservoir and where best to land wells.

There are instances where an oil and gas company is not well suited for a particular area of innovation. Among them are edge and internet-of-things devices. In recognizing this, Anadarko sought help from a company that specializes in applying artificial intelligence to industrial machines. The startup has since helped automate the set points on every plunger lift system it owns. Anadarko has done the same thing with Ambyint, which focuses on automating rod lift systems, but to a lesser degree since it owns very few of these systems.

This automation work has helped drive small gains in production, but perhaps the bigger benefit is that it has allowed the company to reorganize the way it uses field operators. Instead of making routine visits to check on set points, crews now take a more targeted approach.

Anadarko has also been one of the largest users of a DNA diagnostic service offered by Biota, which traces microbial populations in the subsurface to help operators allocate production to certain horizons of a shale formation. The operator has surveyed the DNA of almost 300 wells in an effort to help confirm the existence of fracture barriers.

On the drilling side, Anadarko tapped a Covar to use computer vision to track crew movements on rigs. This application is being used to look for ways to improve crew reactions and behaviors on the drill floor, hopefully identifying and then addressing the root causes of invisible lost time. The operator has also partnered with Abyss Solutions, which is a startup that has developed computer vision algorithms to detect and predict corrosion on offshore installations.

SFile is another small company that Anadarko turned to for a new digital way of doing business. The Houston-based startup is among those using spider bots, or web crawler technology, to help operators discover important nuances hidden amid mountains of drilling, completions, and production data.

During just a few months last year, the company collected 1.6 million documents related to invoices. But when fed into legacy planning software, some of this giant data set was lopped off because there simply were not fields to enter it into.

“We get aggregated invoices—the detailed invoices are on page five or seven of that same package,” explained Jose Silva, the emerging technologies and strategy manager at Anadarko. Drawing on an analogy, he said that the effect was like going to the grocery store each week and buying a gallon of milk without easily knowing if the price of the milk went up or down since the last trip.

Anadarko’s supply chain staff had tried to determine how prices were changing manually until Sfile was brought in to use programing to extract all the data to easily track how those costs fluctuate.  Silva described the output as “tactical information” that the supply chain unit used to negotiate prices with vendors.

Power to the People

Inspired by innovation leaders at NASA, Anadarko started turning to crowdsourcing platforms about 2 years ago. Millions of coders and software developers offer their services through these online communities. Though others in the industry have pushed the concept of open innovation, Anadarko fully embraced it.

Richard Copsey, the company’s open innovation manager, said the reason for outsourcing dozens of projects this way comes down to this simple realization: “You can’t have all the smart people.”

He noted that the nearly 2,000 people who have done work for the company via crowdsourcing is equal to roughly half of the company’s full-time employees. There were two other reasons to take this route: it is fast and can be very cheap. Many of Anadarko’s crowdsourced projects—done via the TopCoder platform—took a few days to complete, while others a year. They ranged in price from a few thousand dollars up to $90,000.

Copsey was brought into Anadarko over a year ago to become the open innovation manager. Just like its other projects, the company had tested open innovation enough times to know it worked, but it needed someone to design a process that could deliver the benefits at scale. A big part of his job was taking an oil and gas problem and then framing it in a way that people with no exposure to the technical side of the business could understand. This step was critical to finding unique solutions.

An example that NASA has cited to illustrate this point, and eventually Anadarko, involves the simple, unassuming potato chip. When a snack food maker wanted to come up with a way to sell customers a less greasy potato chip-eating experience, it turned to the crowd for ideas.

The company could have asked “how to remove grease from a potato chip,” but experience shows that direct questions too often result in old ideas and no real breakthroughs. So instead, the question was “how to remove a viscous fluid from a delicate wafer?” The best answer came from an unlikely source—a violinist who advised that using acoustic resonance would decouple the fluid and do so without breaking apart the wafer, or potato chip.

Anadarko had a similar experience when it tendered a project to create an automated mug logging analysis program. Mud logs are recorded while drilling a well and contain within them evidence of “gas shows,” which could indicate an overlooked pay zone. Despite the insights contained within, mud logs are often not scrutinized because their unstructured nature means such a task is long and tedious.

In the end, the person who cracked the nut was a Brazilian detective whose specialty is in detecting check fraud. The solution was an algorithm that employs what is known as optical character recognition, or OCR, to build a database that highlights the quality of gas shows. This program was used to run through more than 50,000 of Anadarko’s mud logs.

Anadarko’s Digital Legacy Offers a Template for Others