When Will the Market Stop Punishing Public Shale Operators? 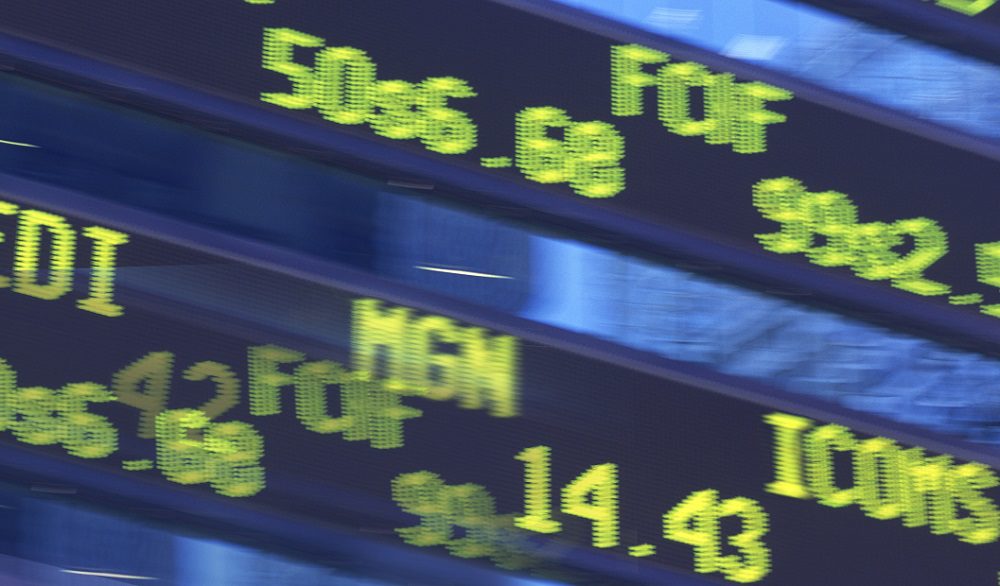 Earnings season gives investors a chance to scrutinize the financial health of public oil and gas independents and then grill them about their performance. This time around, earning calls come amid an intense, 10-month-long slump in share prices for the segment, and it has become evident that executives are feeling the heat.

Over the past couple of years, companies have scrambled under investor pressure to reduce costs, generate free cash flow, and increase shareholder distributions and share repurchases. They’ve made progress: Despite lower oil prices during the first quarter, dividend payments and share repurchases by US operators amounted to more than 33% of their cash from operations, US Energy Information Administration analysis of publicly available data indicates. It was the highest for any quarter since the beginning of 2014.

Some operators are faring better than others in this transition, but nearly all are still being punished by the market. S&P’s index of exploration and production companies has plunged by almost three quarters over the last 5 years, and in less than a year, by around half. Share prices of some of the largest shale independents have taken the biggest hit:

The trying times have weighed on psyche of shale pioneer and Continental Chairman and Chief Executive Officer Harold Hamm, who commented during his firm’s second-quarter earnings call that he does not “see a lot of value” in being a public operator in today’s market. Looking beyond Wall Street, Scott Sheffield, Pioneer president and CEO, offered further pessimism during his firm’s call, questioning future oil-market strength and production growth potential in the Permian Basin of West Texas and southeastern New Mexico.

While other shale operator executives have been slightly less dour in their earnings calls, the overall mood has been one of uncertainty. “We can't control the market,” said Hamm. “We can control what we're dealing with here on a daily basis. And that's what we're doing.”

Continental, which has large acreage positions in the Bakken Shale of North Dakota and SCOOP and STACK plays of Oklahoma, recently announced a dividend payment that adds up to $75 million/year and a $1-billion share-repurchase program. Seen as one of the US independents ahead of the curve when it comes to free cash flow generation, Continental expects to bring in another $600 million in cash flow during the year.

For these reasons, Hamm said, “We do not think our current share price is a fair indicator of the value of our company.”

The company is also touting operational efficiencies that will allow it to reduce its Oklahoma rig count from 19 to 12 by year end without sacrificing expected production targets. Hamm credited a “step change in performance" from its rig fleets targeting the Springer and Woodford reservoirs as part of Continental’s large-scale Project SpringBoard development. Its “completion teams in Oklahoma have completed 22% more lateral feet than budgeted, and they have done so at 17% lower cost per lateral foot,” he said.

Continental is not “changing the well count—it's just the rig count,” explained Hamm, who also noted that he believes there are around 100 more rigs working in the US than actually needed. His sentiments apparently comport with those of other operators, at least to some degree, as rig contractors Helmerich & Payne and Patterson-UTI kicked off earnings season by saying they expect further declines in US drilling.

For Pioneer, the “goal is to get up to the average of the S&P 500 as quickly as possible” while continuing its share buyback program, Sheffield said. Moving to a quarterly distribution, the company also has increased its dividend to $1.76/share from a previous $0.08/share.

Sheffield returned to the CEO role earlier this year as former President and CEO Timothy Dove retired. The change came as the company shifted its strategy from ambitious growth to capital discipline, which has included stepping back from a plan to increase its Permian output to 1 million BOE/D by 2026, a large workforce reduction, and selling off its assets in the Eagle Ford Shale of South Texas.

Numerous public shale operators have descended on the Permian since the downturn and banked their futures on the basin’s potential for big liquids yields and high well productivity. Midland Basin-focused Pioneer has had a presence in the Permian for decades through its predecessor companies.

Traditionally bullish on the Permian, Sheffield during his firm’s earnings call predicted “significant fallback in Permian growth” over the next couple of years, with “the Midland Basin as the only growing basin in the US past 2025.” He also shared pessimistic views on the global oil market, saying he doesn’t see $55/bbl oil in the near term. “You'll probably move toward no growth for most people.”

The slowing of Permian growth, Sheffield explained, will be caused by years of aggressive drilling, frequent downspacing, and Tier 1 acreage “being exhausted at a very quick rate,” namely in the Delaware Basin. As a result, operators “are going to have less cash flow if we stay in the lower oil-price environment. People don't want to build debt in this environment, so there's a lot of reasons why I just don't think we're going to see the long-term growth.”

Sheffield added, however, "The majors are the only ones that are drilling aggressively" at the moment. "I don't see them slowing down.”

Much of the recent market volatility related to Concho has been reaction to disappointing results from its 23-well “Dominator” project in the northern Delaware Basin. “While initial rates were solid, current performance data indicates that we developed the Upper Wolfcamp too densely,” said Tim Leach, Concho chairman and CEO. 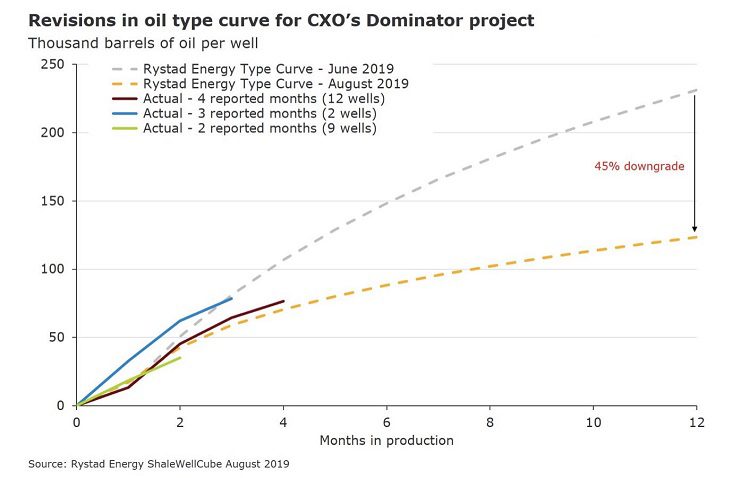 “We're incorporating the data into our development model to adjust spacing on future projects including those projects set to spud in the second half of 2019,” he said. In the Midland Basin, Concho said it has had better luck with its 18-well Marion Benge project targeting the Spraberry and Wolfcamp formations.

A year after its acquisition of fellow Permian pure-play firm RSP Permian, making it one of the basin’s largest independents, Concho reported a second-quarter net loss of $97 million due in large part to lower Permian natural gas and NGL prices.

“Our focus is heightened on landing our budget within our cash flow,” said Leach. “The gas and liquids market has deteriorated, therefore so has our cash flow modestly.” The company is now cutting its production outlook in the second half from its original plan for the year.

At 18 rigs working, Concho is running 6 fewer rigs than originally slated. “We made the decision to adjust our drilling and completion schedule in the second half of the year to slow down and not chase incremental production at the expense of capital discipline,” Leach said.

Few of the large shale independents are in a more difficult position than Chesapeake, which has spent the last several years attempting to overhaul its business.

Earlier this decade, notorious activist investor Carl Icahn, who then held a stake in the company, lamented its “poor governance and unchecked risk taking” under former CEO Aubrey McClendon. Current President and CEO Doug Lawler took over and his firm has since been “through hell and back,” he said in late 2018.

Lawler has worked to reduce the shale gas trailblazer’s massive debt load and focus its portfolio on fewer basins while reducing its exposure to challenging gas markets. But the company still holds more than $10 billion in debt—four times its market capitalization—with its purchase of WildHorse Resource Development, a move to become more liquids-focused, not helping matters on that front.

The good news, however, is that the Wildhorse deal is beginning to pay off from an operational perspective. Chesapeake’s oil production increased to a record 122,000 B/D in the second quarter, representing 25% of its overall output. The growth was driven in large part by its newly integrated Brazos Valley acreage in Texas, part of the Wildhorse deal, and its position in the emerging Powder River Basin of Wyoming. Costs are coming down as well.

“As a result of our capital efficiency, we have lowered the breakeven oil price for a Brazos Valley well to $39/bbl, an approximate 26% improvement,” said Lawler. “Chesapeake continues to deliver progress on the fronts that we can control operationally,” he said.

But accelerating activity—and thus spending—in those assets will have to be balanced with paying down debt, and positive free cash flow still eludes Chesapeake, which makes it a prime example of why many investors do not see a lot of value in public shale operators.

When Will the Market Stop Punishing Public Shale Operators?