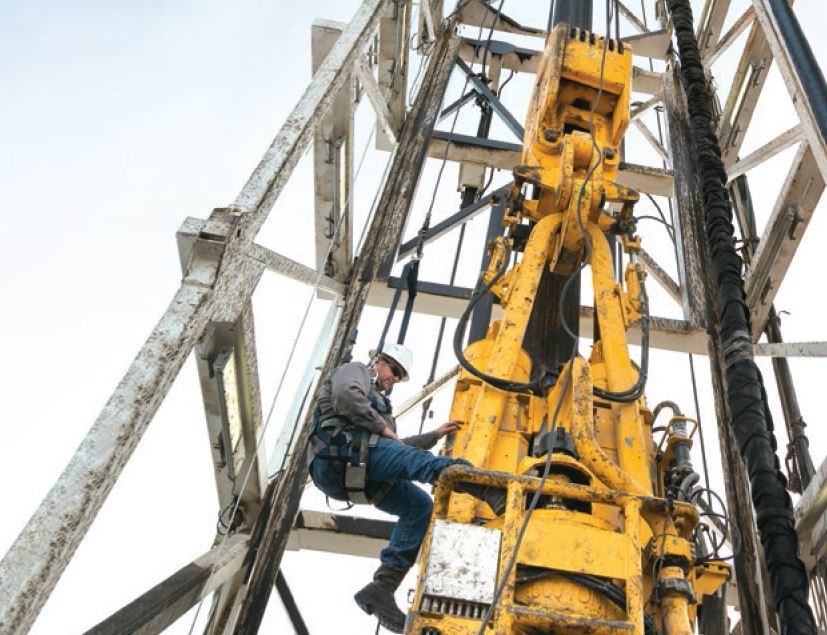 But last year, Concho Resources, the third-largest producer of oil and gas in the Permian Basin, decided to push the envelope. The company assembled seven drilling rigs owned by six different contractors and five fracturing fleets on a mile-long tract of land to build the “Dominator Project.”

The effort took the better part of a year and, in the end, it delivered 23 wells targeting five individual target horizons in the Wolfcamp Shale formation. The location, in the northern Delaware Basin, was carefully selected for sitting atop some of highest-quality geology within one of the highest-producing unconventional plays on the planet.

But when executives revealed the first oil production results in July, new doubts were raised about the success of the experiment. They said the well spacing, which averaged a horizontal distance of 230 ft. compared with the area average of 600 ft., was “too tight” and that future projects would execute wider intervals.

Independently developed type curves show that the Dominator wells are now on pace to fall short of initial estimates, maybe by as much as 45%. The news triggered one of the sharpest selloffs ever seen in the shale business, sending Concho’s share price down 22% for a single-day market value loss of close to $4.4 billion.

The sector is now studying the implications that this project will have on the cube developments that are believed to require at least $150-$200 million to execute for the largest such projects. Only the largest operators can afford to take this route and among those are Concho, Encana, Devon Energy, and QEP. Several others, including Callon Petroleum, Pioneer Natural Resources, and Chevron are in transition, according to various reports.

As the trend moves forward, questions are being raised about the business model that the cube represents, and how big these developments can be before diminishing returns kick in.

Analytics and industry consulting firm Enverus, which just this week changed its name from DrillingInfo, is using a new platform it built for analyzing well spacing scenarios to piece together the lessons learned from the Dominator case study. One obvious takeaway for the firm is that constructing 23 wells in a drilling section is probably too many, at least in the oil window of the northern Delaware.

“You now have the upper range,” said Tyler Krolczyk, a petroleum engineer and analyst at Enverus. He noted that Concho’s program mostly involved eight well pads in this area of the Wolfcamp before it jumped to the 23-well Dominator pad. Other operators have averaged just a couple of more wells per pad.

“There is a big question mark in between the 10 and 23 wells,” said Krolczyk, citing specifically a dearth of pads in the area drilled out to 16 wells. “I think it would be interesting to get into that middle ground and see what the production number is.”

This drone photo of the one-mile long "Dominator Project" in Lea County, New Mexico taken by location planning firm in August shows the scale of the project and its several well pads and production facilities. Source: Ai Prime.

How Do Cubes Make Cash?

The unknowns are a reminder that shale development strategies in the Delaware are still evolving and optimal well spacing remains elusive to many operators. But the goal posts are also moving, which makes it important to correctly interpret the aim of cube developments.

Facing financial headwinds and pressure to generate free cash flow, the shale business is moving away from prioritizing production growth and toward a model that favors improving the value of each well drilled.

The idea is that if operators can spend less capital, or use it more efficiently, to create a large batch of wells all at once—which describes a cube development—then that operational savings offsets the fact that each well may underperform in comparison to the “row” approach where wells are drilled and completed one, two, or four at a time. Fewer barrels of oil may come out of the ground, but each one costs less to produce.

Consultancy Wood Mackenzie issued a new report that said if shale producers save just 10% per well, then a cube development can increase the net present value of each drilling section between 30-70%.

“Cubes were originally described as a way to save [estimated ultimate recoveries (EUR)] and limit child well downgrades, but as recent high-profile cubes have shown, the EUR benefit is far from guaranteed,” wrote Ryan Duman, an analyst at Wood Mackenzie in a research note. “Cost savings and efficiency gains are the key benefits and should be the main drivers for switching from traditional row drilling.”

But How Much is Too Much?

This raises one of the chief concerns about cubes, which is the risk of over-capitalization.

Drilling and completing a large number of wells at once greatly reduces the ability to test spacing and flow-unit theories. Wood Mackenzie notes that in addition to losing this flexibility, the cube approach forces operators to commit large sums. This means “if well spacing is wrong, cash flow can actually be impaired,” said Duman.

One other way to look at this concern is to boil it down to this question: does a high well count maximize recovery, or does it accelerate recovery that could have been achieved with fewer wells?

The Dominator Project may be showing signs of the latter.

According to data compiled by Enverus, the first 11 wells that began flowing in February of this year had an average peak oil rate of 1,049 B/D—slightly higher than Concho’s basin average. The next month, two more wells were brought on stream at an average rate 1,084 B/D.

The signal came in April when six more wells were flowed with a peak rate of just 646 B/D. The roughly 38% drop  between the first wells and those that came on last has put the Dominator Project on track to underperform in terms of cumulative production vs. the rest of Concho’s projects that target the Wolfcamp. It is not known when or if the remaining four wells will be completed and brought on line.

Though it is hard to have a positive outlook on the Dominator based on these figures, Krolczyk cautions against drawing too many conclusions at this early stage. “There is still a little bit unknown here,” he said, noting that the first production results “can be misleading for several different reasons.”

The advisement is to wait until 6 months of production data come in, which should be available soon per New Mexico’s reporting cycle. At that point, Krolczyk said analysts could make more accurate estimates of ultimate recovery figures and see if they are balanced out with the cost savings earned through the high-density logistical operations.

So, We Won’t See Mega-Pads?

The answer to this question, at least in the Delaware, is likely a no.

There is not a set number of wells that defines what a mega-pad or cube development should consist of. But when some large independents shared the first details of the concept, they projected that several dozen wells could be landed less than 400 ft apart into a single drilling section.

“That is definitely not what is being done in reality,” said Krolczyk. “And what that resulted in was very high acreage prices for (proved undeveloped reserves).”

Analysts dubbed this period as “Permania” as publicly traded operators purchased land from smaller private equity-backed companies for $60,000 an acre and upward. As operators evaluated their new investments, assumptions were that the stacked layers of pay zones represented very large well inventories that would take decades to drill out.

The sector has since retreated from its best-case scenarios.

The most scrutinized example played out a couple of years ago with the company that coined the term cube development. At Encana’s RAB Davidson pad, one of the first large cube projects, brought on 33 producing wells, which was less than half of the 70 that the operator initially planned to drill.

In a document that explains the results of the early experiment, Encana highlights that it intentionally used aggressive well spacing of 300-400 ft. and has used the lessons to improve returns elsewhere. The company also indicated that it considers a project to be a cube development with as few as six wells.

If history is a guide, then there are more examples that suggest less is more in the Delaware.

In 2017, Anadarko moved into high-density mode in the Delaware’s Wolfcamp Shale but by the next year it too made an about face. When the operator, now owned by Occidental Petroleum (Oxy), upped its average well count per section from six to 12 it found that oil and gas production dropped close to 30%, based on figures shared by Enverus.

A look at Oxy’s approach in the same area and zone of the Wolfcamp tells a different story about spacing. Since 2014, Oxy has averaged between five to six wells per section and has been rewarded with some of the highest-producing wells in the Delaware. From 2016 to 2018, output per lateral foot averaged between 19 and 20 B/D.