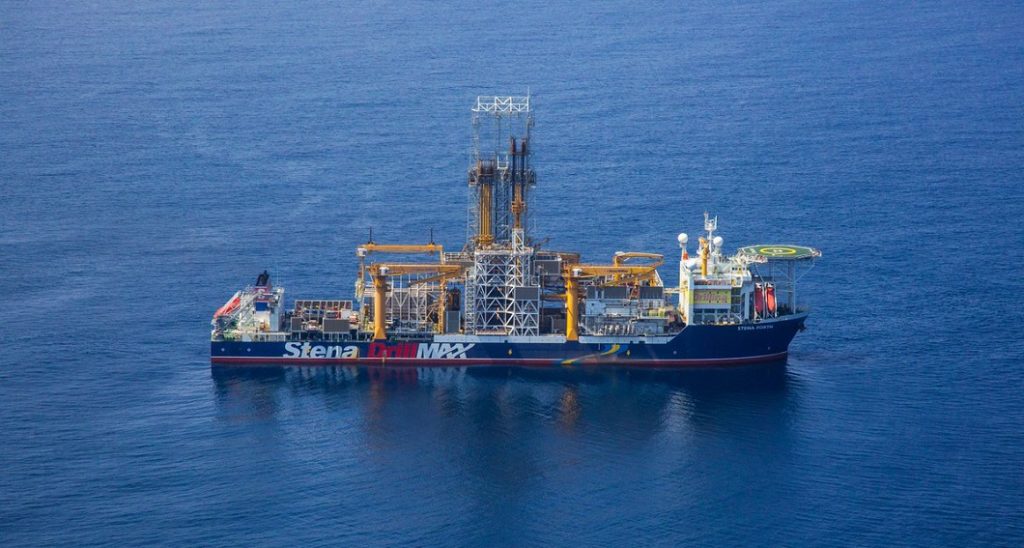 Tullow’s Joe-1 discovery well was drilled by the Stena Forth drillship to a TD of 2175 m in 780 m of water. Source: Stena Drilling.

ExxonMobil and London independent Tullow Oil both announced oil discoveries offshore Guyana on 16 September, bringing their tallies in the basin to 14 and two, respectively.

ExxonMobil’s Tripletail-1 well on the Stabroek block encountered 33 m of high-quality oil-bearing sandstone reservoir, the US major said. Drilled in 2003 m of water, Tripletail-1 is 5 km northeast of ExxonMobil’s Longtail discovery, marking the sixth find in the Turbot area.

Tripletail-1 adds to the previously announced estimated recoverable resource of more than 6 billion BOE on the block. After wrapping up work at Tripletail, the Noble Tom Madden drillship will next drill the Uaru-1 well located 10 km east of ExxonMobil’s Liza field, where production is scheduled to begin next year.

A month after announcing its first discovery off Guyana, Tullow said its Joe-1 well has successfully opened a new Upper Tertiary oil play in the basin and derisked the petroleum system in the west of the Orinduik block. The well, drilled by the Stena Forth drillship to a TD of 2175 m in 780 m of water, encountered 14 m of net oil pay in high-quality oil-bearing sandstone reservoirs of Upper Tertiary age.

Tullow said “a significant number” of Tertiary and Cretaceous prospects have been identified on the Orinduik block, which is west of Liza field.

“The Joe-1 discovery and its surrounding prospects represent another area of significant potential in the Orinduik block, and we are greatly looking forward to the next phase of the program as we continue to unlock the multibillion barrel potential of this acreage,” said Angus McCoss, Tullow exploration director.

Tullow will now evaluate data from the Joe-1 and Jethro-1 discoveries and await the outcome of the Carapa-1 well on the Kanuku license to determine the subsequent exploration and appraisal program. The Rowan EXL II jack up rig is slated to begin drilling Repsol-operated Carapa-1 in late September, testing the Cretaceous oil play with results expected in the fourth quarter.

Elsewhere on the Stabroek block, the Stena Carron drillship is drilling the Ranger-2 well, and upon completion, will conduct a well test at Yellowtail-1, while the Noble Bob Douglas drillship is completing development drilling for the Liza Phase 1 project. ExxonMobil said it will add a fourth drillship, the Noble Don Taylor, in October as it advances drilling plans based on well results and ongoing study of the basin.

The Liza Phase 1 development remains on schedule to start production by early 2020 and will produce up to 120,000 B/D of oil via the Liza Destiny floating production, storage, and offloading (FPSO) vessel, which arrived in Guyana on 29 August. ExxonMobil in May sanctioned Liza Phase 2, which is expected to start up by mid-2022 via the 220,000-B/D Liza Unity FPSO.

A third development, Payara, is pending government approvals and could begin production as early as 2023, ExxonMobil said. It too would produce up to 220,000 B/D of oil.

Tullow Guyana is operator of the Orinduik block with a 60% stake. Total E&P Guyana owns 25% with the remaining 15% held by Eco (Atlantic) Guyana.