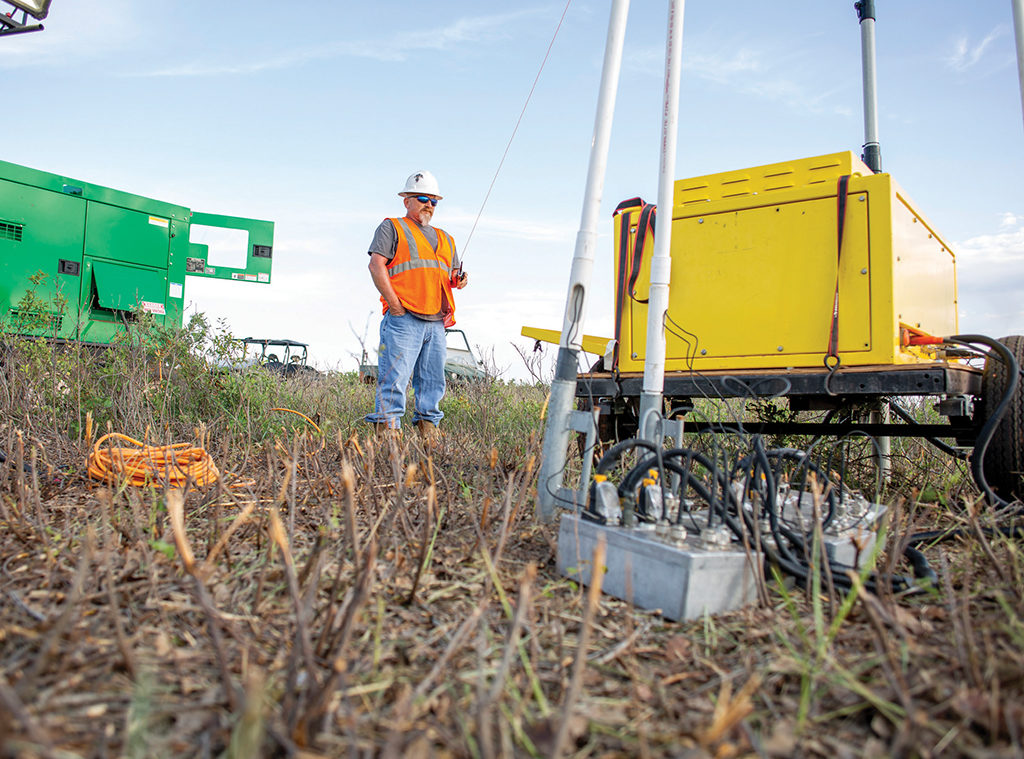 The yellow box and surface systems on the left are being used to generate an electromagnetic field thousands of feet above a horizontal well’s lateral section. When the fluid disturbs this field during a hydraulic fracturing operation, the delta is measured, allowing shale producers to see where the fluid is going. This year, the service did its first real-time trials. Source: Deep Imaging.

While waiting to give a presentation at an industry conference last year, Dale Logan was sitting in his chair listening to one of the speakers lined up ahead of him. The man at the podium was describing an emerging fracture diagnostics system that analyzes the “noise” coming out of a hydraulically stimulated well to measure the size of its fractures.

“I’m just as skeptical as the next guy,” said Logan, a 31-year field operations veteran turned senior vice president of marketing for C&J Energy Services in Houston. “So I said to him, ‘Look, if this stuff is really as good as you guys say it is, then I’m interested.’”

The technology that caught his eye that day comes from an Austin-based startup called Seismos. The chance meeting led to more. Then late last year, the Houston-based pressure pumping company (which will soon become the third largest in the US after its merger with Keane Energy Services) and the startup of fewer than 40 people began working together in the field.

Their experiment was to see if combining C&J’s relatively new drilling data-based completions advisory tool with Seismos’ wellhead-based acoustic analysis proves out the value proposition of both technologies at the same time. Success would be convincing operators that there is a way to predict the relationship between rock properties, fracture half-lengths, and near-wellbore conductivity—opening the door for geologic-based, or “engineered completion” strategies.

The project has borne fruit, but it remains a work in progress as the two companies make sure they know how best to use their data sets together. “It’s not that easy,” said Logan on the pains of the validation process. “You come up with something new, you show people the answer, and then they ask how do you know if it’s right?”

Artificial Intelligence in the E&P Industry: What Have We Learned So Far and Where to Next?

In the spectrum of artificial intelligence (AI) technologies, those adopted to date in the oil and gas industry are task-focused, narrow applications. Taking AI to the next level cannot be done by Silicon Valley alone.