Testing a System Where Machines Decide How Much to Pay a Trucker, and Send a Check 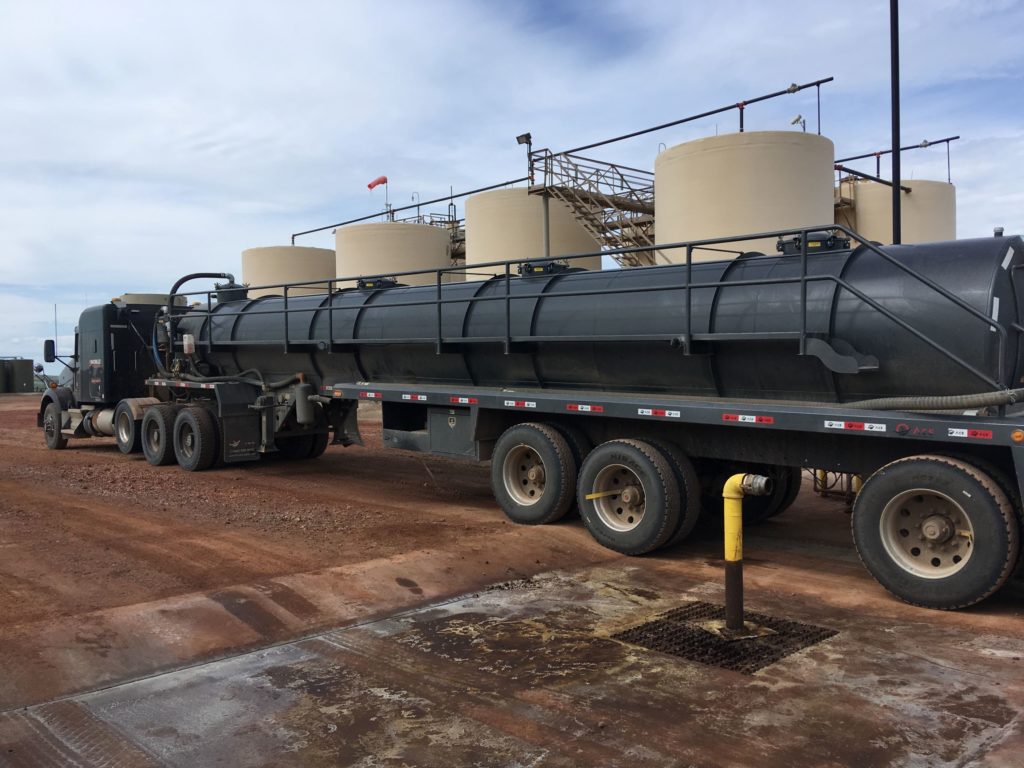 Source: Equinor.
A group of 10 big oil companies is testing whether a system using Blockchain can streamline the job of tracking produced water shipments, like this one at a saltwater disposal well in the Bakken.

About 16 people can end up touching the paperwork required to move a truckload of water from a well in the Bakken to a salt-water disposal site.

Rebecca Hofmann hopes to slash that total to zero as chairman of the Oil and Gas Blockchain Consortium. The 10-member industry group, including her employer Equinor, will be pilot testing a system built to automate tracking, cost accounting, and payments for oilfield shipments.

“I totally think this will be successful,” she said. Her enthusiasm for Blockchain-based tracking was born at a seminar about using Blockchain in business. That feeling was shared by several others and that led her to start holding regular meetings on the subject. Those gatherings grew so large it eventually led to the consortium.

While confident about the digital technology, Hofmann recognizes that the hard part is gathering the critical mass of support needed to make this a commercial reality. Members of the group carry a lot of weight in the industry. They include supermajors—Chevron, ExxonMobil, and Shell—as well as several other large companies, including ConocoPhillips, Hess, Marathon, Noble Energy, Pioneer Natural Resources, and Repsol Natural Resources.

When the Equinor-led pilot project begins, it will need to make a case for change. “There are nine other operators watching our every move,” she said.

The contract to provide a version of Blockchain equipped with the hardware and software needed to bring it all together went to Data Gumbo, which earns a small fraction of the value of transactions tracked. After years of looking for a problem the oil industry would pay it to solve, Data Gumbo recently announced three contracts related to logistics management.

“Water haulage is a prelude to Blockchain for all bulk commodity haulage, including sand, oil, natural gas, and crude,” said Andrew Bruce, chief executive officer of Data Gumbo. This pilot test will expose Data Gumbo to a group of big potential customers.

The consortium is working on a pilot that could help turn budget cost estimates to actual well development cost data, and another that would manage seismic data. For each, Data Gumbo plans to work with companies offering different versions of Blockchain to evaluate strengths and weaknesses.

Blockchain’s ability to record a series of events in a form that can be seen by all involved and changed by no one makes it a logical tool for creating a complete record of a shipment, from the contract through delivery. It is integrated with tools used to reach out for the information needed to measure amounts and make payments.

“It is never just Blockchain anyway,” Hoffman said, because other tools must be integrated with it track information and act on it.

The technology used is generally not new or expensive. What is difficult is building the support required to break entrenched habits, and sell a new “standard way of working,” Hofmann said. Blockchain provides a shared view of the project, but improvements require the parties to identify bottlenecks in the details and work together to resolve them.

The system, installed by Equinor on five Bakken well pads, measures the volume of water in the tank—that can be used to alert truckers to come for a pickup—and a flowmeter to measure how much fluid is loaded into the truck.

Accurate flow measurement represents a significant change for customers who often deal with customers with no meters. Without them, “the operator paid up for whatever that trucker said. That was an accepted financial risk,” Hoffman said. Operators had not installed meters because that would have required adding workers to collect the volume data and match up those amounts with the amounts submitted by the trucking company. Not checking could allow a trucker to report that a truck was full when it was not.

“Because of the accuracy of the flowmeters involved, we can set a matching tolerance of less than 1%,” Bruce said. Time stamps at the well pad and delivery site are used to calculate the time and mileage when calculating the charge.

Will truckers agree to more scrutiny? Hofmann said a handful of them have expressed interest, because the system could allow faster payments and reduce the time and money spent on billing disputes.

Do oil companies really want to find a way to pay bills faster? Possibly, if there is a reward for doing so. There are contracts now giving the shipper a discount for fast payment. Bruce said they are often unable to earn those discounts because they are not “processing the invoices fast enough.”

Both oil companies and their suppliers are expected to save money by slashing the time spent handling, reconciling, and auditing routine transactions. “We estimate that implementing this system can save approximately $0.50/ bbl, or about 10% per barrel of produced water disposed,” Bruce said.

Hofmann puts the potential savings at 25% by changing how payment processing is done now. Replacing a manual system moving through a handful of function areas with an automated one gathering digital data and authorizing payments if the data line up could streamline the process and lower the cost.

There should be some economies of scale if the big operators in the consortium can work out small but critical details, such as the coding used for the tracking programs, for other logistics projects, Bruce said.

“Even if you got 50% flowing through (automatically) that is 50% you do not have to touch that you do touch today,” Hoffman said.

Testing a System Where Machines Decide How Much to Pay a Trucker, and Send a Check