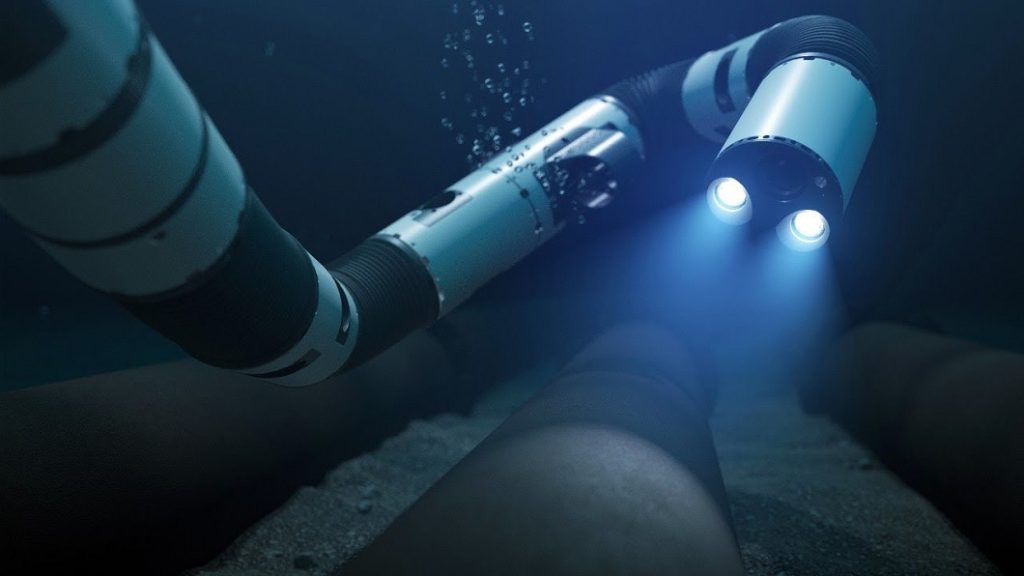 The evolution of subsea equipment includes Equinor’s Eelume underwater drone, which the Norwegian operator is piloting at the Asgard field in the Norwegian Sea. Source: Equinor.

The UK and Norwegian sectors of the North Sea have served as proving grounds for subsea technology. There, operators and service companies have spent decades overcoming a complicated mix of technical hurdles related to depth, pressure, temperature, and lithology to expand the region’s oil and gas bounty.

As with other upstream segments, the financial crunch felt offshore in the region during the oil-price downturn only served to accelerate innovation, but many challenges remain. Offshore exploration activity is lower, field sizes are smaller, the “easy” oil and gas has already been extracted, and oil markets are still in flux.

“It’s amazing how creative and inventive people can become” in difficult circumstances, especially in the technically demanding offshore and subsea segments, said Peter Jones, UK managing director of North Sea independent Neptune Energy. For that reason, he is a big believer in the proverb, “Necessity is the mother of invention.”

Behind much of the new technology adoption in the North Sea is a wave of upstart independents that has scooped up old acreage and new prospects. Among them is Neptune, which was established in 2015 with private equity backing. “Obviously, I'm a bit biased, but I do believe independents have been on the cutting edge of innovation since the first oil in the North Sea was produced,” said Jones.

Making his case, Jones mentioned Neptune’s Fenja project off Norway where the operator is utilizing a tieback to the Njord A platform that will be the world’s longest electrically trace-heated pipe-in-pipe subsea development, stretching 36 km. The technology itself has been used for years onshore, but recently has been deployed offshore, with the first example of a similar technology in use at the Asgard field off Norway.

Tiebacks are an oft-cited example of how offshore operators of all sizes can find more production while saving investment in new facilities. Because of that primary benefit, TechnipFMC estimates that, in the next 4 years, 60–70% of subsea capital expenditure will be invested in tiebacks. “And this has the potential to be even higher,” said Justin Rounce, TechnipFMC executive vice president and chief technology officer, during the same panel. “In fact, when I visit customers, typically one of the first two or three things they ask for from a technology perspective is related to tiebacks.”

Companies such as TechnipFMC are working to fulfill new demand for the technology by finding ways to connect fields and production facilities that are farther apart, in the process overcoming a wider variety of difficult underwater environments. “Some customers say that, if we can cost-effectively extend tiebacks to 30 miles, that opens up a huge amount of opportunity for them. And if we were able to extend that to 60 or 70 miles, then that should be game changing,” Rounce said.

The main challenges to achieving those distances are related to flow assurance, which entails maintaining flow across dozens of kilometers where there are dramatic temperature and pressure changes. While the flowline technology exists today, he said, there needs to be a more affordable way to maintain temperatures within the pipe.

Accompanying advancements are needed in subsea processing, which would benefit from a simplified system that can boost single wells as opposed to multiple wells, particularly when just one or two wells are being tied in to an existing field, Rounce said. “Our vision here is to have a highly efficient multiphase pump that can be integrated into a subsea tree as a module, and we're not there yet,” he said. “But it's certainly a big focus for us.”

Where are the Robotics, Mechatronics?

Once new production is flowing, operators and service companies are keen on reducing human involvement in subsea intervention and maintenance. But the industry has been experimenting with autonomous underwater vehicles (AUVs) through either proofs of concept or pilots for more than decade, and “it's time to move beyond the experiments,” Rounce said.

An experiment moving toward field application is Equinor’s Eelume underwater drone, a hybrid of an AUV and a remotely operated underwater vehicle (ROV) that is being piloted at the Asgard field. The snake-like, self-propelled robotic arm features a slender and flexible body that can move over long distances, allowing for inspection and maintenance work in confined spaces.

The company is working to standardize Eelume’s underwater docking and charging station in an effort to speed up deployment of the technology across the industry. With the docking station design covered, companies can then focus on improving the capabilities of the underwater drone itself.

Another area of promise where there has been little or no adoption, Rounce said, is mechatronics, a field that combines elements of electrical and mechanical engineering, computer science, and control systems, incorporating robotics. There has been broad application of mechatronics in the automotive and nuclear industries, the latter of which, like subsea, is “challenging or prohibitive for humans to interact with,” he noted.

TechnipFMC’s first project incorporating mechatronics involves an in-line compact robotic manifold installed in the subsalt region off Brazil. The four-slot, two-header manifold includes a robotic arm that can actuate 30 valves and is qualified for about 20,000 cycles. Previously, there would have been an actuator for each of the valves.

“The system operated for about 4 or 5 months, and actually we've retrieved the robotic arm in order to measure the impact of long-term deployment in a subsea environment,” Rounce said. The arm will be reinstalled before the end of the year. “I think we're really just scratching the surface in terms of possibilities when it comes to this technology,” he said.

Designing with the Future in Mind

A large barrier to faster and more widespread advancement of new subsea technologies can be boiled down to the industry’s unshakeable habit of over-engineering and designing too many bespoke products, even as the downturn drove a stronger push toward subsea standardization.

“If we look at our frontend business, which engages with customers early in the future field developments, we're starting to see an increase of customers asking for nonstandard products,” Rounce said. “In fact, it's about 40% of all our inbound inquiries that would require us to develop a first-article product.” In the case of subsea trees, he said, the cost and lead time of building a new one is “typically one and a half to two times that of a tree that you made before.”

The issue even spills over to digital technology development, where TechnipFMC’s project load includes involvement in five digital twin projects. Save for one or two those projects, the teams overseeing them on behalf of the owner are “really not spending much time thinking about interoperability and future scalability,” he said. “For the project we're leading, we’re at least trying to develop an open system that can consume data from many different data sources and also further interface with as many open standards as possible.”

Rounce’s concern is that the teams will end up with “fantastic” digital twin technology where every company has its own standard. “I think we need to try and do our best to avoid that,” he said.

Neil Saunders, Baker Hughes president and chief executive officer, oilfield equipment, noted that historically, subsea innovation has come with “a huge amount of customization” where no two systems are the same. “And if our customers were not preferentially engineering us, we were doing it to ourselves,” he said, speaking for contractors.

His firm’s solution leverages a push for equipment standardization by the subsea industry, but does it in a way that makes “four or five different versions that will all work” and fit different operator requirements.  For example, if an operator needs a lighter manifold, it can be reconfigured and composite materials can be reused to reduce system weight.

The Subsea Connect approach, which Baker Hughes announced last year, is a commercial model that involves working alongside operators from design through deployment, integrating modular equipment throughout the subsea system.

The concept of operators partnering on research and development (R&D) to expedite creation and standardization of new technology is nothing new, but the practice has been made a necessity in recent years.

The DeepStar joint industry technology development program has served as a collaborative venture among operators since 1992 but nearly met its demise during the downturn. Recognizing the opportunity ahead, DeepStar reinvented itself after being “too fat and happy,” reflecting a broader industry trend in R&D programs, said John O’Brien, Chevron deepwater focus area manager and contributor to DeepStar.

Part of trimming the bloat meant simplifying processes and projects. The consortium recently came up with a standard contracting scheme in which “any two people can get together and can get something up and running quickly,” O’Brien said. “Sixty days ago [ExxonMobil] sat with me and we decided a project within 2 hours, we executed a contract within 24, and we had a purchase order in the vendor’s arms in 72.”

Now, “Some of our biggest successes at the moment are small data projects that generate an absolute prize back to the business unit,” he said. These projects may involve a mere $25,000 investment, a couple hundred megabytes, and a return of $30 million. “Do that in 2 months, and I guarantee management's going to talk to you the next time about your technology.”

DeepStar’s core project portfolio for 2018 included development of a global standard for subsea docking stations, validation of AUVs for autonomous subsea leak detection, and the study of larger and longer subsea composite flowlines.

DeepStar partners include Chevron, ExxonMobil, Shell, Total, Equinor, Petrobras, Woodside Petroleum, and CNOOC. O’Brien noted that, in the past, independents outfoxed larger companies in technology development and deployment because the independents were nimbler and more open to risk. But the majors have “watched, listened, and learned.”