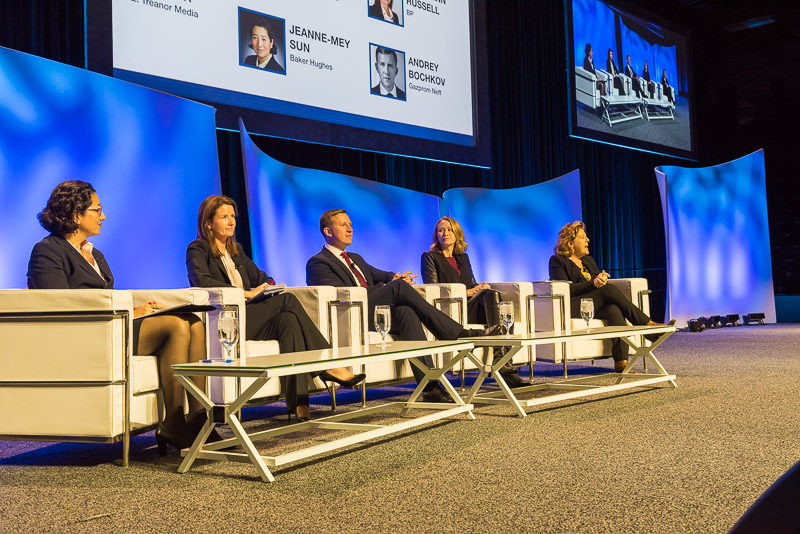 The oil and gas industry must not only adapt to heightened public and government scrutiny on environmental issues but also be a leader in the world’s quest for a lower-carbon energy future, panelists agreed during the opening session at the SPE 2019 Annual Technical Conference and Exhibition.

The panel session, titled “Positively Impacting the World through Responsible Energy Development,” featured participants from BP, Baker Hughes, Gazprom Neft, and ARC Energy Research Institute. It kicked off the 3-day conference, which is being held in Calgary for the first time.

Calgary and cities around the world hosted protest marches last week from people demanding that government and industry take more action on climate change. Meanwhile, investors are pressuring oil and gas companies for healthy returns in a lower-price environment, and world demand for hydrocarbons could grow by a third over the next 2 decades. “That is an amazing challenge for our industry,” said Leigh-Ann Russell, head of Upstream Procurement and Supply Chain Management at BP. “Oil and gas companies not only have a crucial role to play in this challenge, but the most crucial role.”

Participants noted the need for perspective in the current climate change debate, as energy consumption continues to rise, particularly in developing counties. Sami Alnuaim, 2019 SPE President, introduced the panel session by pointing out that there are approximately a billion people on Earth who lack access to basic energy. Even with the growth of renewable forms of energy, oil and gas will provide a major role in meeting demand for decades, he added.

The question of how to reconcile providing more energy while producing less carbon will require “an evolution of our industry” that will require investment in low-carbon ventures and new technologies, Russell said.

Recently, Baker Hughes created a real-time ground- and drone-based system for methane detection and reduction, Sun said, and installed compressors to capture gas that otherwise would have been flared so it could be monetized.

Such efforts are not only good business but increase the competitiveness of oil and gas in the energy space. As the public begins to fully realize that hydrocarbons will be needed to satisfy demand for years to come, it will increasingly view the industry from more of a cost and benefit perspective.

Gazprom Neft is working with the Russian government to reduce flaring and decrease deforestation during seismic activity, said Andrey Bochkov, chief technology officer, Gazprom Neft. Several companies in his region are experimenting with technologies that could help reduce flaring, he said. The Russian government is actively working on reducing gas flaring and venting and has adopted several laws requiring oil companies to cut flaring and seek ways to monetize the wasted gas.

For its part, BP has undertaken a program to “reduce, improve, and create,” said Russell, which involves setting targets to reduce emissions in its operations, improving its products to help customers cut their emissions, and creating and investing in low-carbon businesses. Some examples include using technology to improve pipeline inspections, employing drones to detect emissions in the North Sea, and using special cameras to pinpoint flaring. Improvements will come from making current operations and practices more efficient, such as seeking how to increase auto fuel mileage or decreasing the time it takes to charge an electric vehicle, she said.

“Technology has a vital role to play,” she added.

The oil and gas industry’s most viable technology to offer in the climate change discussion is carbon capture and sequestration, said Jackie Forrest, senior director of research at ARC Energy Research Institute. Currently, there are 18 carbon capture projects in operation, with four of them in Canada, she said.

“It will be hard to get to net zero emissions without a range of carbon sequestration projects,” she said.

Many both inside and outside the industry believe that rapid scale-up of carbon capture, sequestration, and storage is critical for meeting climate and emissions targets while not crippling economic growth. As much as 450 million Mt of CO2 could be captured, used, and stored globally, according to the International Energy Agency, but much of the potential has yet to be realized. Carbon capture and sequestration does not have to be complicated, Forrest added. It could take many forms, such as planting trees, which are effective at absorbing CO2, she said.

About 80% of emissions from oil and gas come from combustion. “Net zero will not happen if we just reduce upstream emissions,” she said. “We have to set our boundaries wider than we have,” including downstream operations. “Our industry has to think much bigger than we are thinking today.”

In addition to proactive technology initiatives, Russell said the industry needs to do more “story telling” so that the public gets a more well-rounded view of the climate change issue. The industry provides light, heat, and mobility throughout the world to millions of people, she said, and has been instrumental in reducing poverty around the globe.