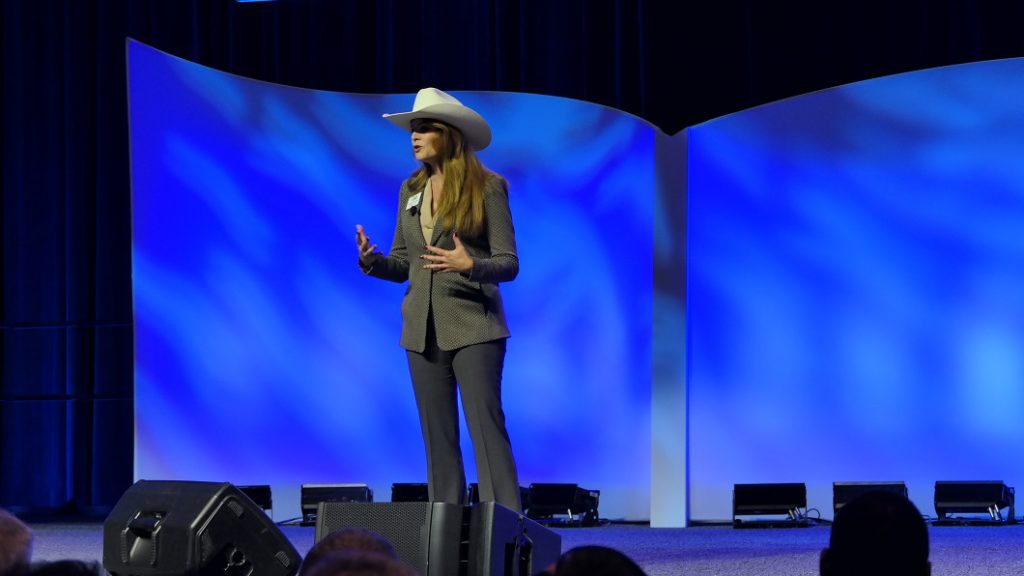 New SPE President Shauna Noonan issues her first address in the organization’s top volunteer positon while donning the “Calgary White Hat,” which is the traditional symbol of the largest city in Alberta, Canada. Source: Jason Notoras/SPE.

This year’s SPE Annual Technical Conference and Exhibition (ATCE) wrapped up with the ceremonial induction of the new 2020 SPE President, Shauna Noonan, who is the director of artificial lift engineering for Occidental Petroleum.

Noonan’s ascendance to the organization’s top volunteer position comes after she served on the SPE’s board of directors and authored and coauthored more than 25 technical publications. An SPE member since her time as an engineering student at the University of Alberta, Noonan said it was “surreal” to be assuming the presidency in her home province. The annual conference was held in Calgary for the first time.

“This is where I was born and most of my family lives here,” she said, adding that “within the outline of this great province of Alberta, there are three significant places that hold special meaning for me as a petroleum engineer.”

The first of those places was the University of Alberta in Edmonton, where she earned her bachelor’s degree in petroleum engineering. At that time, it was the only school in the country where one could obtain such a degree. “We were lumped in with the mining, metallurgy, and mineral processing engineers to form the department of mineral engineering,” recalled Noonan.

After graduation, she moved further north to the Fox Creek oil field as a field engineer. As a young engineer, Noonan used her time in the remote region to absorb learnings on producing complex carbonate and sandstone formations.

“The third place and the most defining for me is right here—Calgary,” she said. “This is the first time ATCE has been held in Canada and it is where I start my journey as your SPE President.”

Noonan’s comments came at the conclusion of ATCE, which drew more than 6,000 oil and gas professionals over three days.

With a new SPE President comes a new vision. Now officially at the helm, Noonan shared that the theme of her presidency is “SPE Strong: Strengthen the Core.” To Noonan, there are several core attributes that represent the backbone of the organization and that reinvesting in those areas will ensure that the society continues to thrive into the future.

Going forward, Noonan will focus her efforts on strengthening these five areas:

Noonan said members should not only be able to receive high-quality content but have ready access to the tools and opportunities to produce their own. “Having high-quality content will continue to strengthen SPE’s technical reputation, which is critical when entering new and emerging markets, attracting new members, maintaining and engaging our current members and corporate sponsors,” she said.

Noonan also highlighted that working cultures have evolved and that knowledge is often consumed on the go. As the industry undergoes its digital transformation, SPE needs to keep pace, she said, including making SPE’s content easily available on mobile and other digital platforms.

One element of transformation is how to balance it with an organization’s true essence. In this case, SPE represents a body dedicated to the science and engineering of hydrocarbon extraction and production management. Noonan noted that while the digital revolution is bringing more automation to the industry, the society must “still deliver quality content and programs for fundamental petroleum engineering and field operations.”

Noonan also used her first speech as president to reaffirm SPE’s central mission to serve as the industry’s ultimate knowledge-sharing platform. She said that this mission is particularly relevant to the unconventional sector, which has spread from North America to places such as Argentina and China.

“The unconventional revolution has recharged our industry, however, the learning curve has been steep,” she said. There are unconventional plays all over the globe that have yet to be fully developed and SPE needs to increase its presence in those regions to facilitate the knowledge transfer of best practices, technology, and cost efficiencies, she said.

Noonan’s other major priority for the next year will involve supporting initiatives that help the industry attract and retain engineering talent. She described the next crop of engineers as one that “must be able to thrive in the high-energy, real-time working environment enabled by the digital oil field.” Noonan said the effort to maintain a robust talent pool extends to helping academia maintain the quality of their faculties.

Reflecting on the Mission

Before Noonan officially became president, Sami Alnuaim of Saudi Aramco issued his final remarks as 2019 SPE President. Alnuaim used part of his speech to briefly update the status of SPE. He stressed that as the industry continues to recover from its downturn, the ripple effects are still being felt by the organization.

These members come from 154 different nations “reflecting the global nature of our industry and who we are as a society,” said Alnuaim who highlighted that the Middle East region had the highest professional membership growth over the last year.

He also recalled a year of traveling around the world to promote the issue of sustainability and explain the oil and gas industry’s role in addressing climate change and environmental stewardship.

“When I first learned I had been selected as SPE President, I had no question that I wanted to focus on sustainability,” shared Alnuaim. “My goal was to strengthen the dialogue on the perception of our industry and the respect our work deserves. I wanted to show the world that oil and gas producers are part of the solution to the world’s environmental and social development challenges.”

He emphasized that pressure on the oil and gas industry and changing public expectations “make it crucially important” that SPE and its members take part in the discussion over the industry’s role in fueling global economic prosperity.

“However, for our contributions to be respected, we must address the public challenges to our license to operate,” said Alnuaim, who went on to speak of his concept for the “citizen engineer.” These are people who manage hydrocarbon resources around the globe, “but also have a strong sense of community and environmental awareness.”

Special recognition was also given during the program to two former SPE Presidents who passed away this year within days of each other: DeAnn Craig, who served as SPE President in 1998 and was SPE’s first female president; and Steve Holditch, who was the 2002 President and the SPE’s first president to be employed by a service company during his term. “DeAnn and Steve both made significant contributions to the society over time, and both will be greatly missed by all who knew them,” said Alnuaim.