Chevron has agreed to sell its 9.57% interest in the Azeri-Chirag-Gunashli (ACG) oil field off Azerbaijan and 8.9% stake in the Baku-Tbilisi-Ceyhan (BTC) pipeline to Hungary’s MOL Group for $1.57 billion.

Excluding the deal, Chevron since early last year has sold or is in the process of selling more than $5 billion in assets, including the pending $2-billion sale of almost all of its UK North Sea holdings to Israel’s Delek Group, announced in May.

Chevron and fellow US major ExxonMobil have recently parted with assets globally while narrowing their focus on regions such as the Permian Basin of West Texas and southeastern New Mexico. In its third-quarter earnings report, Chevron said its Permian production increased 35% during the quarter compared with a year ago.

Chevron has had a stake in the ACG field since it started production in 1997. Operated by BP, the field, which consists of six offshore platforms, produced 584,000 B/D of oil last year and will add around 20,000 B/D net to MOL’s production.

The 1,768-km BTC pipeline serves as the main transport route for ACG crude from Baku, Azerbaijan, through Georgia to deepwater port facilities in Ceyhan, Turkey, on the Mediterranean Sea. It moved 76,000 B/D in 2018. 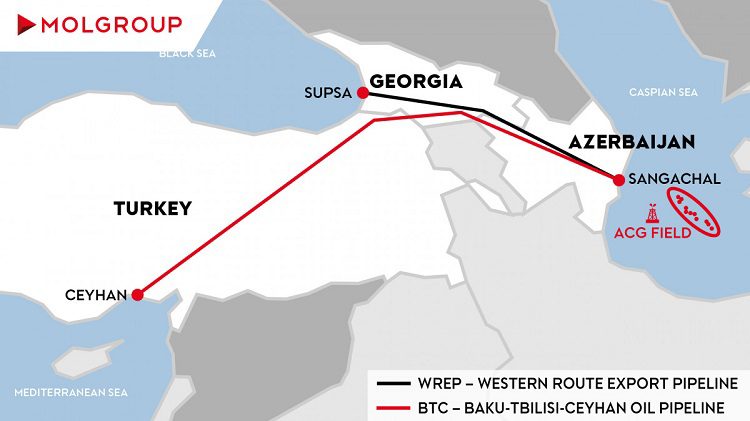 In a news release, MOL describes ACG as “a low-cost producing asset” that breaks even “in a much lower oil-price environment.” The company said the acquisition is part of its effort to develop its footprint in its core Commonwealth of Independent States region.

MOL has production assets in eight countries and exploration assets in 13 countries, with Azerbaijan becoming the 14th in the company’s upstream portfolio.

The deal is expected to close by second-quarter 2020.