Disruption on the Horizon: OTC d5 Presents Thought-Provoking Visions of the Future 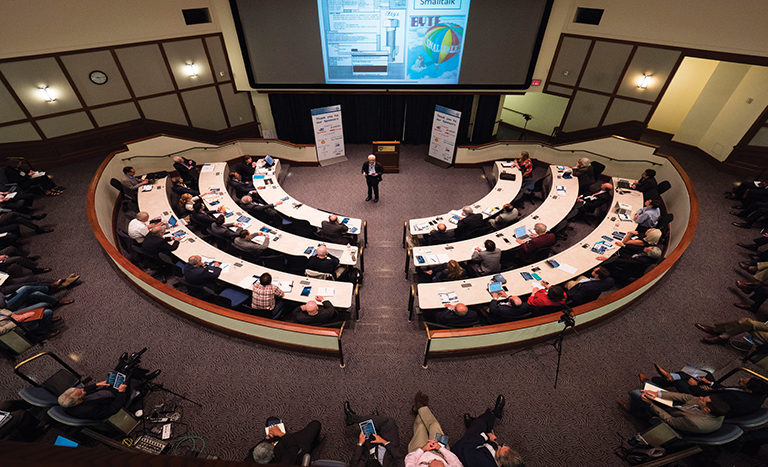 Larry Tesler speaks at Rice University in Houston where he explained to oil and gas professionals how their companies can find value in technologies that failed to have commercial success.

We are living in an age of disruption. If you question that assertion, just reach into your pocket. In less than a decade, a combination of the Internet, smartphones, and the myriad of apps developed to run on them have obliterated a growing number of once-lucrative business models.

Countless brick-and-mortar music stores have been replaced by iTunes and Spotify. Kodak has been replaced by Instagram. The global taxi trade is being redefined by Uber. Expensive long-distance phone calls and over-priced text messages are now free thanks to WhatsApp, Viber, and Skype.

And this is only the beginning. The disruption these consumer-friendly technologies are causing to the retail and service sectors will pale in comparison to the changes coming to energy supply and the entire global economy. This prognostication comes from Vivek Wadhwa, a renowned technology researcher and a fellow at Stanford University.

“Every industry will be disrupted,” he said. “As technology advances, it becomes more powerful, it becomes smaller, and it becomes cheaper. It democratizes so that anyone, anywhere can now use it to build world-changing solutions.”

Wadhwa was the keynote speaker at SPE’s second annual d5 event on the Friday after OTC. Held at Rice University in Houston, the meeting featured speakers with various backgrounds in digital technology and oil and gas who shared their ideas on how to challenge the status quo.

Wadhwa’s message to the audience of oil and gas executives from around the world was that technology development is on an exponential path, and that there is no turning back.

Over the next few years, he said the world will witness the rapid maturation and convergence of robotics, 3D printing, low-cost sensors, artificial intelligence, and high-performance computers. There will be unprecedented benefits, but also plenty of upheaval to go around.

For instance, Wadhwa is an investor in an Indian-based startup that makes an affordable and portable computer capable of running a battery of medical tests that typically require a visit to the clinic or hospital.

Comparing it to the fictional tricorder device made famous by Star Trek, he said the new invention will not only revolutionize health care in the poorest parts of the world, but it will also present an attractive alternative to patients in rich countries frustrated by long wait times that end with an examination by a doctor that lasts an average of only 7 minutes.

On the flip side, when robotics-based manufacturing takes hold next decade, Wadhwa predicted that China’s economy will collapse as companies in the US and elsewhere relocate factories back to their home countries. He said China is unable to avoid this future despite a billion-­dollar initiative to build “zero-labor” factories that use robots instead of human workers. “The problem for them is that their robots are no harder working than ours are,” he explained.

But for many of those in the room, the most relevant piece of Wadhwa’s remarks was his forecast for the energy sector. For those in the fossil fuel business, the outlook may be a little nerve-wracking.

What does all that mean for the oil and gas industry? According to Wadhwa, just one word: “toast.” There will still be some need for oil and gas in the decades to come, but he believes the era of demand destruction has already begun and will be accelerated by electric, driverless cars and solar power generation.

The cost of solar power has been driven down dramatically in recent years and Wadhwa said that with each 20% drop, the number of installations around the globe doubles. He noted that many government subsidy programs ended last year, yet solar power remains “an unstoppable force” and may supply 100% of US electricity demand in 40 years.

A discussion led by Larry Tesler, the inventor of the cut, copy, and paste command on personal computers, merged the topics of management and technology. Tesler, who has held various leadership roles at Apple, Yahoo, and Amazon, stressed the importance of not letting good ideas go to waste even if the product line they were initially dreamed up for was a flop.

“Identifying the next big thing may take several tries,” he cautioned. “If you do something too early, then it’s not going to be high-performing. If you do it too late, your competitors will get there first.”

When a technology fails upon launch, companies should identify its most successful elements and then find new ways to leverage them. Two ideas Tesler proposed were to license the technology to others and to spin off the team that developed it into a startup to allow investors to share the risk.

Tesler drew on personal experience from the time he worked at Xerox’s research facility in Palo Alto, California, to talk about the do’s and don’ts of managing corporate research. He was among only a few people in the room when the company’s cutting-edge computer technology was demonstrated for Apple cofounder Steve Jobs in the winter of 1979.

The meeting has become a fixture in the pantheon of Silicon Valley folklore because it is where Jobs was presented with, and then appropriated, the computer mouse and the window-based graphical user interface. Months later, Jobs would also lure Tesler away from Xerox to join Apple.

Fast forward to today, Xerox is merely a footnote in the history of personal computing and Apple is the world’s largest computer company by revenue.

Tesler said there were a number of other factors behind Xerox’s failure to take advantage of its own innovations. One was the company’s refusal to redirect resources from its copier business to support the growth of its computer business. This resulted in Xerox’s personal computers costing 13 times more than the competition.

“Disrupt or be disrupted,” is the lesson to be learned here, Tesler said. “Put it that way, and maybe you can sell your company on going in and taking some big risks.”

Tesler said Xerox made many of the same mistakes years later when it missed the chance to capitalize on the low-end laser printing market. He hinted that things may have turned out differently had there been better communication between Xerox’s headquarters in Connecticut and its research center in California.

“The research center and corporate have to be engaged with each other,” he said. “Someone who has only been in engineering organizations, and never was close to a research organization, will have expectations that are just not realistic. But vice versa, the research people have to understand that what they are doing won’t make a difference unless it turns into a product.”

The importance of engagement was also a central theme in a presentation given by Gindi Vincent, an author and counsel at ExxonMobil. Citing recent studies, she said only 30% of the American workforce feels engaged with their job.

Part of the problem is that too many companies are focused on financial goals alone, which Vincent explained is not a top priority for the average worker. “It’s not the money, but the mission” that drives most people, she said.

As a student of the brave leadership philosophy, Vincent said managers need to stop surrounding themselves with people who look like them and start building diverse work teams made of individuals with different backgrounds and perspectives. This improves creativity which she said is one key to staying relevant for the long term.

Vincent also recommended that companies look for innovative ways to improve internal communication and encourage employees to give their feedback and submit more of their own ideas. One example she provided was a company that uses television monitors in its common spaces to play short videos of different employees describing their accomplishments at work.

She also spoke about the tough times many upstream oil and gas com­panies are going through as they manage a nervous and dispirited workforce. Her advice on keeping morale up is to establish short-terms goals for employees to reach for and to “tout the wins” as they come.

One thing companies should avoid trying is to improve morale with office perks, which she said do not work. “Giving someone a cappuccino bar is not what is going to engage the workforce,” she said. “It is going to be driven by personality and by leadership.”

Disruption on the Horizon: OTC d5 Presents Thought-Provoking Visions of the Future