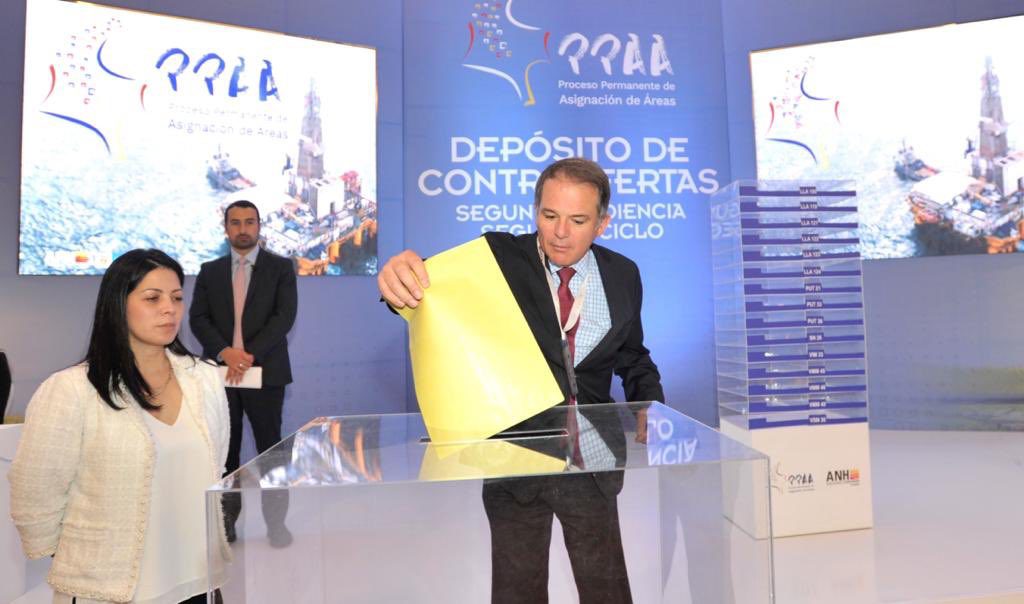 Rafael Pinto, a representative of Parex Resources, submits the company’s counteroffer for Block 124 in the Llanos Basin on 5 December in Bogota. Source: Colombia’s National Hydrocarbons Agency.

“By extending our exploration efforts for conventional natural gas to the Middle Magdalena Valley Basin, [Canacol] continues to execute its successful conventional gas exploration strategy to replace declining production from the mature gas fields located in the Guajira and at Cusiana-Cupiagua in the Llanos Basin,” Mark Teare, Canacol senior vice president, exploration, said in a news release.

Parex was awarded one block in the Middle Magdalena Valley and one in the Upper Magdalena Valley, and teamed with Colombian national oil company Ecopetrol on one awarded in the Llanos Basin. The counteroffer under review is for another in the Llanos Basin, Block 124, on which the company doubled the initial bid by partners GeoPark and Hocol, a subsidiary of Ecopetrol, to $24 million.

ANH will publish whether or not the counteroffer was accepted on 11 December. If accepted, Geopark and Hocol will then get a chance to improve their bid.

The GeoPark-Hocol partnership was awarded Llanos Block 123, which is next to Block 124. As independent bidders, Ecopetrol and Hocol also each added one Llanos block.

Frontera Energy and Amerisur Resources, which GeoPark recently agreed to acquire, were respectively awarded one block in the Llanos and Putumayo Basins.

“With these results, added to the 16 contracts already signed this year, we will be closing this year with a total of 31 signed contracts and investment commitments that exceed $2.7 billion,” said Luis Miguel Morelli, ANH president, in an announcement following the round.

Parex, Ecopetrol, Gran Tierra, Frontera, GeoPark, and Hocol were awarded other onshore blocks earlier this year. Ecopetrol, ExxonMobil, Repsol, Shell, and Noble Energy have been awarded offshore blocks this year in the Caribbean Sea. The ongoing auctions come as the South American country seeks to maintain or improve oil and gas production in the coming years.