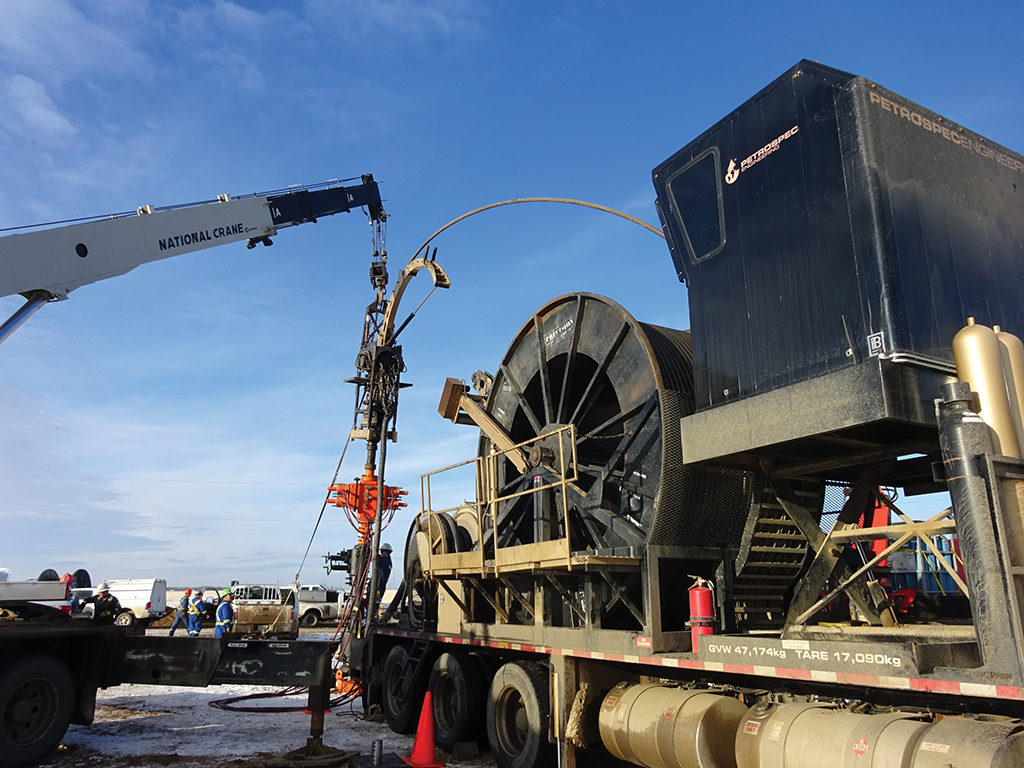 One of those wells is owned by Canadian Natural Resources (CNRL), which reported that production rose 50% (SPE 196187). The gains “have proven the economics of continuing the operation of the downhole electric heat and CNRL will be applying to continue the enhanced oil recovery process,” according to a report to the Alberta Energy Regulator.

Still, those heating cables made by Salamander Solutions are a tough sell.

It is up against depressed heavy oil prices, the high cost of electricity in some locations, and long memories of heating cables that failed.

“I talked to an operator who told me the reservoir performance when the heater lasted was great, but he would never do it again,” said John Karanikas, the chief technology officer for Salamander, who said that none of its cables has gone out in a customer’s well.

Older cables required multiple splices to connect 100–200 m sections. If one of those weak points failed, the rest of the line went out like a string of lights after a single bulb fails, said Scott Penny, general manager for Petrospec Engineering, a partner in the business that installs the heating cables.

Salamander’s cables can heat a well more than 7,000 ft long without a splice, Karanikas said. The company is working on planning some complicated installations where a splice is required. The company has put a lot of work into more durable ways of connecting cables, which it has patented.

Heating cable technology was developed by Shell, which needed electric cables capable of heating rock to 650°F—which required an electric cable that could heat to 1200°F. In comparison, heavy oil is easy. It only needs to reach 300°F. (Oil shale is kerogen-rich rock where extreme heat can extract a lot of oil, which is different that oil in shale, which is in ultra-tight rock that is released using fracturing.)

Shell tested the cables by running them at even higher temperatures, jolting them with extreme power surges, and simulating years of hard use, Karanikas said. The cable passed those tests and worked in the field, but Shell dropped oil shale in favor of more conventional oil and gas options. Salamander was created to market the heating cable technology, with a staff made up of many veterans of the development process.

Both tests in the recent paper were in older wells in a heavy oil field. The many wells like those, which are still on primary production, could offer a large market for electric heating.

The Salamander heater cable in the CNRL well was installed by Shell, which sold the field to the Canadian company. Shell was looking for a heating alternative to steam that did not require costly casing upgrades to handle steam heat, said Carl Stretch, a Shell engineer who worked on the project.

Electric heating was installed in the toe of the well. It cooled as it left the heated zone on the way to the production casing, eliminating the need to install high-temperature casing and cement, he said.

Electric heating delivered more oil but it did not spread to the more than 100 similar wells nearby. The results were good, but not good enough to justify scaling it up.

The number of barrels added were not huge—from about 25 B/D to 37 B/D—and depressed Canadian heavy oil prices were short of the levels expected in financial projections.

Old wells are often used to test new technology, because the downside of a failure is low and there are so many wells that could benefit from the same treatment.

Big gains are required to justify buying a system costing from $100,000 to $1 million, depending on the length. That is a tough sell at a time when operators have little to spend because the benchmark price for Canadian heavy crude is around $38/bbl.

Salamander has adapted to the market, by building a thinner, lower-cost version of the cable able to fit into narrower wells. It is looking globally for heavy oil customers.

An unnamed company in California is testing a cable, Karanikas said. Another possible market is heating subsea pipelines where near-freezing temperatures can lead to production-choking buildups of gas hydrates and paraffin.

There has also been interest in whether electric heating can speed initial production from well pairs drilled to extract ultra-heavy bitumen from oil sands using steam-assisted gravity drainage (SAGD). Preheating the area around the upper injection well is supposed to speed the growth of the area heated by the steam, allow more oil to flow into the lower production well earlier. Karanikas also predicts more even heating along the steam-injection well.

Heat from an electric cable is not going to replace steam in the oil sands. The resistive cable, which works like a high-tech version of the heating element in a toaster, can only affect a limited area around the well. Electric heating costs more than steam, which is also more effective at mobilizing bitumen.

“We are not a competitor to steam. It is a complement to steam or solvent,” Karanikas said.

Suncor Energy has received permission from the Alberta ­Energy Regulator to test how electric pre-heating performs in a SAGD well at its MacKay River project. Suncor said it will be running a test this winter, but would not identify the electric cable supplier.

While heating can quickly increase production, after a few years the edge over unheated wells narrows.

“We get challenged. Is it accelerated production or added recovery?” Penny said. Over many years, the edge would disappear, if the well owner is willing to keep paying to pump and maintain a well producing little oil.

One possible strategy is to deploy electric hearing during the first 2–4 years of production, when the gains are largest, and move it to a new well, Penny said.

Not all heavy oil wells are worth the trouble. Salamander evaluates possible installations using customer information to see if the likely added production will justify the cost.

The short list of requirements for a profitable application ends with: the well needs to be able produce 20 B/D of oil without heating. This tests whether there is enough oil in place around the well and reasonably permeable rock.

Water production needs to be no more than 30% of the output and the oil sand needs to be at least 5 m thick, because there is no reward for heating water or nonproducing rock.

These standards are not absolute. A well with a high-production upside, or with access to cheap electricity, may justify dealing a higher water cut or other issues. Sustained price increases for heavy oil could loosen all those limits.

This paper updates a previous case study and presents the results of actual implementation of an optimized steam-injection plan based on the model framework.