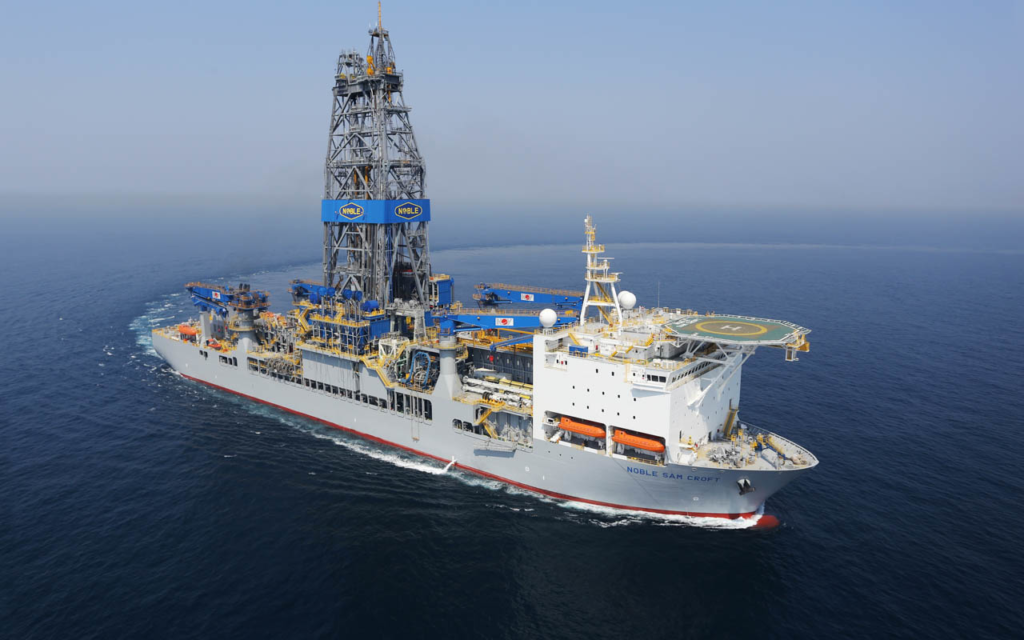 The drillship Noble Sam Croft is drilling for Apache and Total off Surname. Source: Noble

Shares of the oil company operating the well in partnership with Total jumped nearly 20% after the announcement that it had found oil in two zones in the Maka Central, a deeper oil pay that is 240 ft thick and a shallower zone with light oil and condensate that is 164 ft thick.

“We are very pleased with results from Maka Central-1. The well proves a working hydrocarbon system in the first two play types within Block 58 and confirms our geologic model with oil and condensate in shallower zones and oil in deeper zones,” said Apache CEO and President John J. Christmann.

In the statement, he said the “preliminary formation evaluation data indicates the potential for prolific oil wells. Additionally, the size of the stratigraphic feature, as defined by 3-D seismic imaging, suggests a substantial resource.”

That positive reaction is a total mood swing from a month ago when Apache’s stock price sunk 12% in one day on a cryptic statement that Apache had drilled to 20,340 ft where it would test two Upper Cretaceous zones then drill down to 22,600 ft.

Analyst comments then suggested that the lack of details suggested Apache had failed to find anything. The discoveries were apparently around those depths, because drilling stopped at 20,670 ft where drillers “encountered significantly over-pressured, oil-bearing reservoirs.” The release said that was a “positive sign” and that the company plans to drill the deeper interval in the future.

That stock loss was erased when Apache announced a partnership with Total on 23 December. The French company agreed to provide billions of dollars of support for exploration and development in exchange for a 50% interest. Apache will be operator of the first three wells drilled, and Total will then become the operator of the block.

The Maka Central well is about 7 miles from the border of Guyana, where ExxonMobil plans to produce 750,000 B/D of oil by 2025. Both ExxonMobil and Tullow Oil, which has also made discoveries off Guyana, are also exploring off Suriname.

Next, the drillship that drilled the discovery well, the Noble Sam Croft, will move 12 miles southeast to the Sapakara West-1, which will test rock of the same age—Upper Cretaceous intervals—though the stratigraphy there is different.