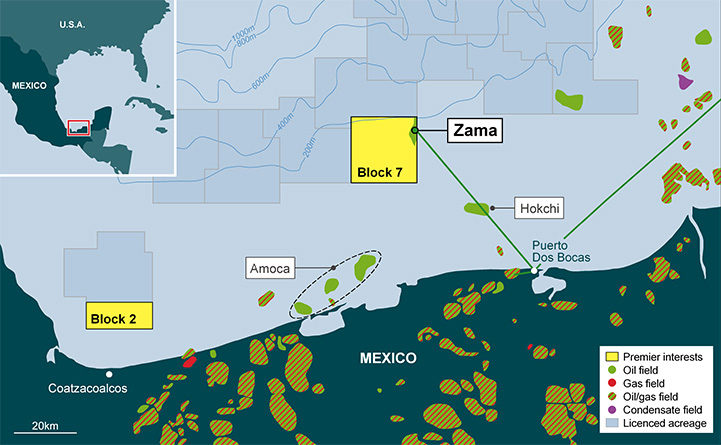 Talos Energy has released the results of a new independent evaluation of its Zama discovery offshore Mexico, which estimates the asset holds about 670 million BOE in recoverable resources. The estimates are in line with Talos’ pre-appraisal estimates of 400-800 million BOE.

The Zama field is the first discovery made by a foreign company in the Mexican side of the Gulf of Mexico (GOM) following the historic opening of the country’s oil and gas sector in 2015.

Details of the reserves audit were shared amid ongoing negotiations between Houston-based Talos, Mexico’s state-owned oil company Pemex, and Mexican regulators over revenue sharing through unitization.

It was reported last year that Pemex officials were lobbying to assume operatorship of the Zama discovery because the target reservoir extends beneath an adjacent offshore block that it has rights to. The proposal would make Talos a nonoperating partner, leaving intact its working interest in the cross-block field.

The newly released independent audit estimates that at least 60% of Zama’s resources are within the Talos-operated block. In acknowledging the discovery is shared between two blocks, Talos is asking for the unitization process to move forward quickly in order to make a final investment decision this year. If approved, Talos said first oil could be achieved as soon as 2023.

Tim Duncan, chief executive officer at Talos, said: “The Zama project alone could generate approximately $28 billion of fiscal revenue to Mexico’s government—in addition to Pemex’s share of Zama—and will drive a significant amount of local job creation and positive social impact across the supply chain of this project. We believe it is in everyone's best interests to maintain the urgency in bringing this project forward, and ensuring it is done so in an efficient way that draws from international best practices is critical to achieve these objectives.”

Talos emphasized that its reserves audit relied on a full geological data set collected from reservoir penetrations, including a down-dip test to confirm oil-water contact. Also included in the assessment was more than 1,400 ft of core samples, an extended flow test, 185 pressure samples, 60 oil samples, and 28 well logs.

Talos holds a 35% stake in the Zama field as part of a consortium that includes Sierra Oil & Gas, Wintershall DEA, and Premier Oil. In a press release, Talos touted the consortium’s work done so far to develop the asset as a shared reservoir. Current plans call for two fixed production platforms to serve as the hub for a combined 150,000 B/D, plus associated gas.

The Zama field lies in about 550 ft of water, which would make the two platforms the deepest ever installed offshore Mexico. Talos noted its experience in this regard, highlighting that five of the 31 platforms it operates in the US Gulf of Mexico are in water depths greater than 550 ft.

In December, Talos announced it was acquiring several producing and exploration assets in the US GOM from a group of companies for $640 million. The deal is set to make Talos a top-10 producer in the US GOM and the largest public company exclusively focused on GOM assets.