A total of 12.2 billion BOE was discovered worldwide in 2019—the highest volume in 4 years, according to Rystad Energy, with offshore regions dominating the list of new deposits. Twenty-six discoveries of more than 100 million BOE were recorded, with new discoveries in Guyana alone totaling approximately 1.8 billion BOE.

ExxonMobil added four new discoveries within its Stabroek block. The supermajor’s ongoing efforts and results in Guyana, plus significant investments and results in Cyprus, added approximately 1.0 billion BOE and $2.7 billion to its resources and earned it Rystad’s “explorer of the year” designation for the second year in a row. In addition to the ExxonMobil discoveries, Guyana’s volumes were further boosted by Tullow Oil’s Jethro and Joe exploration wells, which established the presence of a working petroleum system to the west of the Stabroek block.

The largest single discovery of the year—and the deepest-water find—was BP’s Orca-1 gas well, drilled in approximately 2510 m of water off the coast of Mauritania in the Mauritania-Senegal-Gambia-Bissau-Conakry (SGBC) basin. Rystad estimates Orca-1 to hold approximately 1.3 billion BOE of recoverable resources, and reported that there are now enough resources in the region to justify plans to build an additional LNG hub in the Bir Allah area of Mauritania.

Two discoveries in Russia’s Kara Sea—Dinkov in the Rusanovsky block and Nyarmeyskoye in the Nyarmeysky block—added approximately 1.5 billion BOE in new resources for Gazprom. Additionally, the Dinkov discovery was ranked as the second-largest in 2019, worldwide.

Among other large discoveries of oil and gas around the world were Total’s Brulpadda in South Africa, ExxonMobil’s Glaucus in Cyprus, and CNOOC’s Glengorm in the UK, and Equinor’s Sputnik in the Norwegian sector of the Barents Sea. 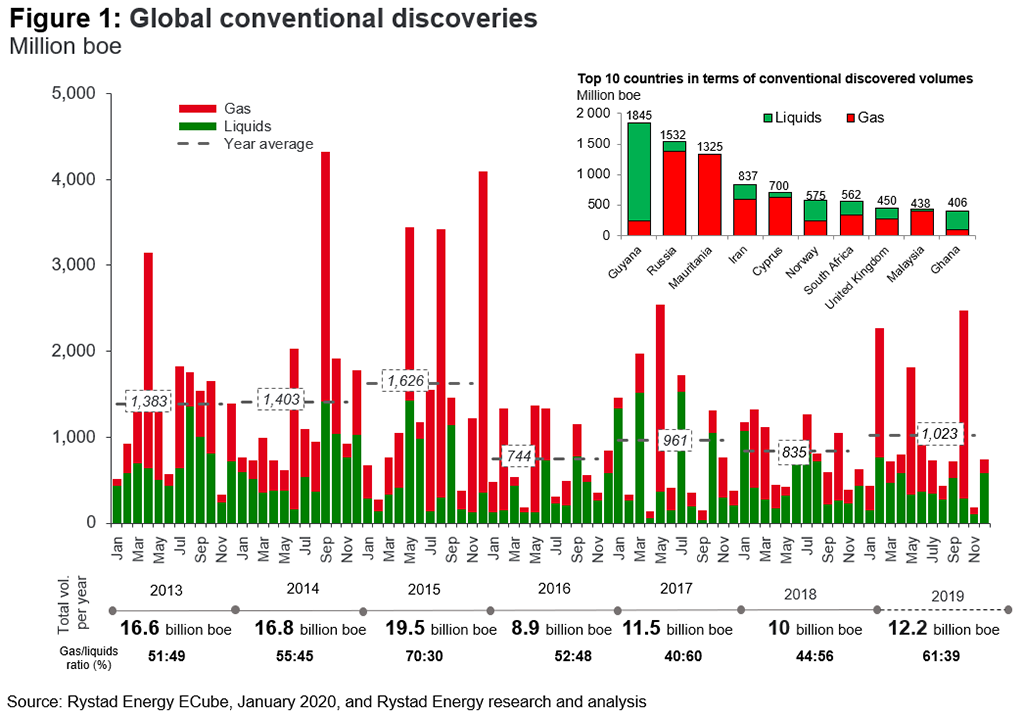