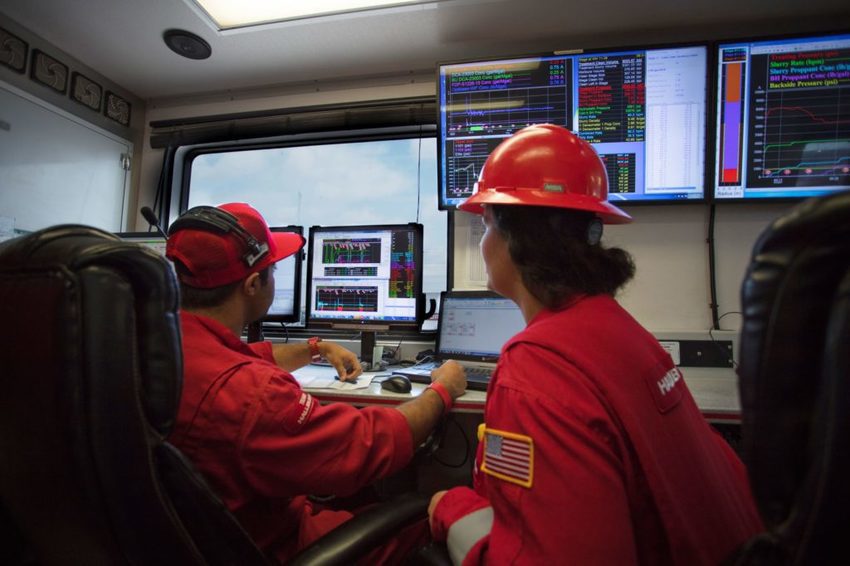 Inside the fracturing van. Source: Halliburton

The world’s two largest oilfield service firms are moving quickly to reduce their exposure to the slowing North American unconventional sector by laying down substantial portions of their fracturing fleets.

Schlumberger and Halliburton told investors on earnings calls held in the past week not to expect a market turnaround in either the US or Canada any time soon, while playing up the importance of markets elsewhere.

But on 17 January, Schlumberger said it had stacked half of its fracturing fleet compared with its third-quarter inventory. The shrinking US market contributed heavily to Schlumberger’s loss of $10.1 billion in 2019. The year prior, Schlumberger reported an annual profit of $2.2 billion.

On 21 January, Halliburton posted a $2.2 billion quarterly loss from its pressure pumping business and said it ended 2019 with a 22% reduction of its fracturing fleet. The firm’s net loss for the fourth quarter was $1.7 billion.

“The US shale industry is facing its biggest test since the 2015 downturn, with both capital discipline and slowing leading-edge efficiency gains weighing down activity and production,” said Jeff Miller, the chief executive of Halliburton.

Miller highlighted that demand fell for Halliburton’s services across all North American shale basins during the quarter as the number of fracture stages the firm completed dropped by the largest number in recent history.

Going forward, Schlumberger announced that OneStim— its largest business unit in North America and the one responsible for its pressure pumping services—will operate out of just three hubs within only the most active US unconventional plays. Presumably, that refers to the Permian Basin, Eagle Ford Shale, and the Bakken Shale. The stacked equipment will not return to service in the near future, the company said.

Olivier Le Peuch, the chief executive of Schlumberger, said on his company’s earnings call that a wider retreat from the pressure pumping market is possible. “While we believe these actions improve OneStim performance, reshaping it for the better into a focused and profitable business line, we will keep our options open and be ready to participate into an enhanced market consolidation offering, given the right partner and economics.”

In 2018, Schlumberger paid $430 million to Weatherford for its pressure pumping business and service facilities after a joint venture between the two companies fell through.

Living In A New Landscape

The downcast earnings reports coincided with realizations that US tight-oil production is trending toward a peak, a point that most analysts and industry participants agree will be reached either this year or next.

Miller cited “constricted capital flows” as the chief factor behind slowing crude production growth in the US while adding that the decline in activity across the sector has been exacerbated by low US natural gas prices, which just this month fell below break-even levels.

On his call with investors, Miller pointed out that the “long awaited” attrition of fracturing equipment clearly manifested itself in the fourth quarter. In December, smaller rivals Superior Energy Services and Basic Energy Services announced they were abandoning the US pressure pumping business altogether.

“This is just the beginning,” said Miller. “We believe a lot more equipment will exit the market as lower demand, increasing service intensity, and insufficient returns take their toll.”

Fleet cannibalization for parts and the sidelining of more non-contracted pumping units suggest that the supply of horsepower may shrink faster than some market watchers expect, he added. If so, the lower supply would lead to more advantageous pricing for service providers.

To further conform to the new landscape, Halliburton said it is seeking out buyers of its pipeline services unit and well control business, the famed Boots & Coots, which it acquired in 2010.

Likewise, Schlumberger announced it is divesting from non-core businesses. The company shuttered its onshore coiled tubing service in North America during the fourth quarter, citing the commoditization of the technology as one reason for the decision. Additionally, Schlumberger plans to walk away from its rod lift business in North America if it can find a willing buyer.

Last year, Schlumberger and Halliburton reduced their fracturing horsepower in the struggling unconventional market in western Canada. And after nearly a century offering cementing services in Alberta, Halliburton made the decision in December to shutter those operations.

The service giants have also seen their market share diminish in other areas, including the crowded measurement-while-drilling (MWD) and directional drilling sectors in Texas. The competitiveness of this arena induced Schlumberger to take a new step for the company by leasing out its MWD equipment to smaller service companies.

Schlumberger said franchising some of its technology is a key piece of its “fit-for-basin” strategy that will see the company reduce its service facility footprint by 25% by the end of 2020. The company already reduced its US workforce by 1,400 employees since the third quarter of 2019. In return for these moves, Schlumberger expects to save $300 million a year.

As the outlook for demand continues to soften in North America, both Schlumberger and Halliburton are looking to markets in Latin America, Europe, and Asia to buoy the balance sheets.

Halliburton reported that its revenue outside of North America grew by 10% to more than $2.8 billion during the fourth quarter. “In 2020, we expect our international growth to continue,” Miller said. Driven by completions and a rebounding offshore sector, Schlumberger reported that it grew its international operations by 2% over the same quarter. The firm is projecting that figure will rise to 5% over this year.