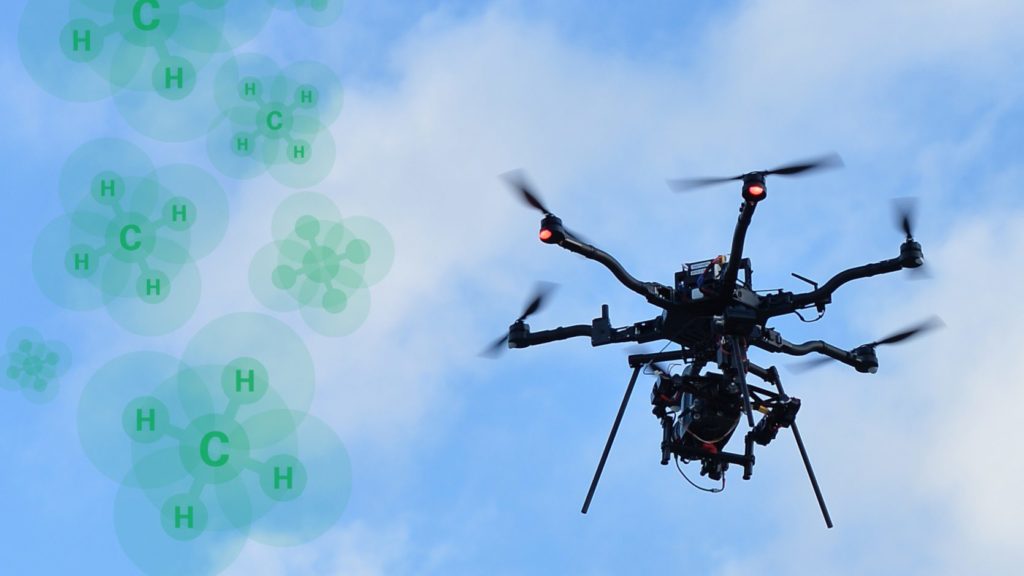 Drones equipped with new sensor technology have become one of the most sought-after tools for methane mitigation. Source: BP/Rebellion Photonics.

A sample of the most recent funding rounds and acquisitions of upstream-focused startups shows that oil producers and outside investors are looking for a wide array of innovations to improve the bottom line of this trillion-dollar industry. They include technologies aimed at mitigating fugitive-methane emissions, new inspection and analysis systems, and cloud-based products that make buying oil and gas equipment as simple as using Amazon or Alibaba.

Since October, a handful of startups have raised a disclosed sum nearing a quarter of a billion dollars. The sum far exceeds the $70 million raised in the months prior.

However, the trend of where these investments are going remains largely on course. Developers of digital technologies—those that exist purely in the realm of software along with those combining emerging software and hardware products—dominated this most recent cycle just as they did in the one before.

Founded in 2013, SparkCognition offers cybersecurity, document management, and machine-learning services to the aerospace, renewable energy, and oil and gas sectors. The Austin-based firm has partnered with large corporations that include Boeing, Hitachi, and Aker BP.

Shell has also tapped the company to be part of its Game Changer accelerator program to work on pore-pressure prediction, an application described by the companies as critical for well planning and safe operations. SparkCognition’s most recent capital raise was part of its series C financing. The company has raised a total of $175 since it was founded in 2013, boasting a reported valuation over $725 million.

Houston-based GoExpedi is a growing e-commerce platform for the oil and gas industry, offering more than 200,000 parts and supplies on its website. The e-commerce model delivers pricing transparency to a marketplace historically defined by opaque pricing, long-maintained for the competitive advantage it hands suppliers.

The supply-chain focused platform has trimmed product delivery costs as well, typically by 25%, according to GoExpedi. Founded in 2017, the startup is mostly focused on the US onshore market but plans to use the new funding to expand its business to offshore, midstream, and downstream markets globally. More than 20 firms are regular users of the platform, including two of the largest drilling contractors in the US. Last year, the company secured $8 million in equity financing through its series A round.

Houston-based Rebellion is the developer of an automated visual monitoring technology that detects gas leaks and plumes—or what the firm calls a Gas Cloud Imager—at oil and gas facilities. The firm was founded in 2009 out of the Houston Technology Center, an incubator that has since ceased operations. In 2013, Rebellion was named “Startup of the Year” at The Wall Street Journal’s inaugural startup contest.

Before the sale to the industrial automation giant Honeywell, Rebellion counted international majors Chevron, BP, and Shell as clients. BP used the startup’s sensors on drones to seek out methane leaks in Oman. Shell recently installed the company’s technology at its “well pad of the future” in west Texas.

Intelligent Mud Solutions (IMS) is a developer of a portable automated drilling fluid analysis system. The technology works in real time and replaces the need to send drill mud samples to a laboratory for further testing. The skid-based apparatus is hooked into the return line of a shale shaker on a drilling rig where it measures the mud’s rheology, viscosity, density, and gel strength.

Based in Stavanger, IMS says its motivation for the technology was to bring mud mixing and property analysis—a largely manual process—up to par with technologies such as automated pipe handling systems that are now common on modern offshore rigs. The data generated by the IMS system is considered to be an enabling input for drilling automation and control systems. Equinor’s venture group has become one of the largest shareholders of the firm through its undisclosed investment.

Denver-based Crusoe has developed a flare-mitigation technology that uses otherwise burned natural gas from wellsites to power modular cloud-computing systems that have been designed to meet the rugged requirements of the oil field. The company reports that it has systems in the field today working for privately owned and publicly traded oil and gas companies.

Over the course of the first half of 2020, the goal is to deliver 40 more units to the field. Current projects are located in Wyoming, Colorado, North Dakota, and Montana—all home to active shale plays. Each system is capable of consuming millions of cubic feet of gas per day. The capital raise breaks down to $30 million in equity funding and $40 million in project financing.

Seattle-based Seeq received its second major injection of capital from several of its original investors. Large oil and gas producers have adopted Seeq’s data analytics software to monitor anything of value that produces a time-stamp. This includes flow meters, compressors, production facilities, and refineries. So-called time-series data has historically represented one of the most challenging aspects of “big data” since it requires considerable time to extract from spreadsheets and to then visualize.

The attraction to Seeq is also due in part to the software’s user-friendly interface and back-end data management that provides seamless access to equipment data. Seeq said the cash raise of this second round might extend to $30 million upon closing. In total, the company reports it has raised $60 million to date.

LaserStream specializes in laser mapping of tubular assets, e.g., marine risers and flowlines, which are susceptible to erosion along with wear and tear. The data-acquisition service delivers high-resolution images that can be used for non-destructive testing, asset condition monitoring, and predictive analytics.

Founded in 2014 in the Houston area, LaserStream adapted technology originally born within the defense industry to take internal scans of gun barrels on large-caliber artillery units and tanks. The firm was selected as one of the 10 most-promising startups at Rice University's fifth annual Rice Alliance Startup Roundup event held at the 2019 Offshore Technology Conference. Stress Engineering said it plans to scale up the LaserStream’s application to midstream, downstream, aerospace, consumer, and medical services.

Described as an early-stage startup, M1neral is developing a platform that seeks to reduce the complexity involved with buying and selling royalty and mineral rights—a $500 billion market. Despite the large value of US royalties and minerals, the marketplace is highly fractionated with more than 12 million owners spread across the country. Interest is rising in the company for its promise to use modern cloud technology and artificial intelligence to enhance asset queries and accelerate transactions.

COVID-19 has significantly accelerated the adoption of digital technologies across all industries, and the oil and gas industry has been no exception. As such, interest in digital data acquisition, which is the backbone of all digital transformation work flows, also has increased significantly.