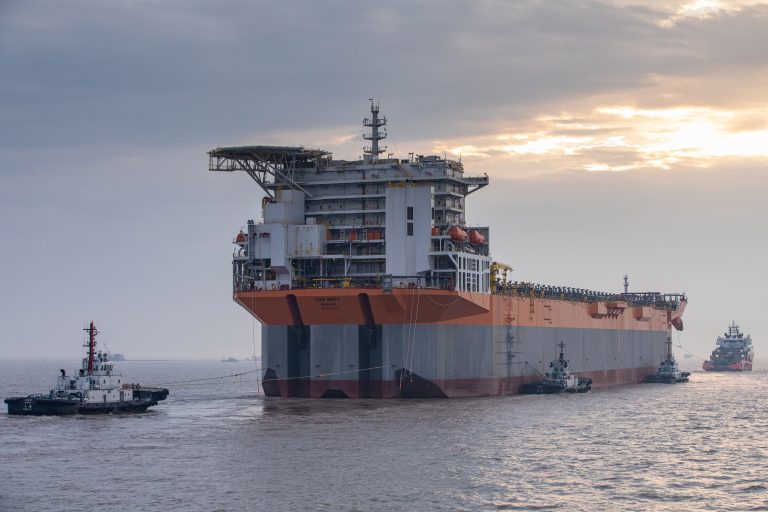 The hull of the Liza Unity being transferred from China to Singapore where topsides will be constructed. Upon completion in 2023, the floating, production, storage, and offloading (FPSO) unit will sail to Guyana to produce up to 220,000 B/D. Source: SBM Offshore

Uaru is the name of ExxonMobil’s 16th discovery in the waters offshore Guyana.

The Uaru well is found within the Stabroek Block and is located about 10 miles to the northeast of the Liza field, which achieved first production in December. ExxonMobil reports that it found 94 ft of oil-bearing sandstone reservoir while drilling the well in a water depth of 6,342 ft.

The international major also announced that the 15 discoveries it made prior hold an estimated 8 billion BOE—an increase of 2 billion BOE from its previous estimate. ExxonMobil did not break down the figure into estimated quantities of crude or natural gas.

No development plans for Uaru have been shared. Meanwhile, ExxonMobil said production from Liza Phase I is ramping up toward a goal of 120,000 B/D within months from the Liza Destiny floating production, storage, and offloading vessel (FPSO).

A second FPSO, the Liza Unity, is under construction to support Phase II. The vessel will handle 220,000 B/D and is expected to be completed and begin production in mid-2022. As the larger of the two FPSOs, Liza Unity will hold up to 2 million bbl of crude oil compared with the Liza Destiny’s capacity of 1.6 million bbl. The Liza Unity will also process up to 400 mmscf/D and inject up to 250,000 B/D of water for reservoir management operations.

A third development, the Payara field to the north of the Liza wells, will target another 220,000 B/D by 2023, pending government approval and financial sanctioning.

ExxonMobil is exploring the 6.6 million acre Stabroek Block—an area found about 125 miles offshore Guyana—with four drillships but plans to add another drillship later this year. The company holds a 45% interest in the block, along with Hess Corp. (30%) and China National Offshore Oil Company (25%).